The Best Video Game News This Week: Bugsnax, Fable, and No More Heroes 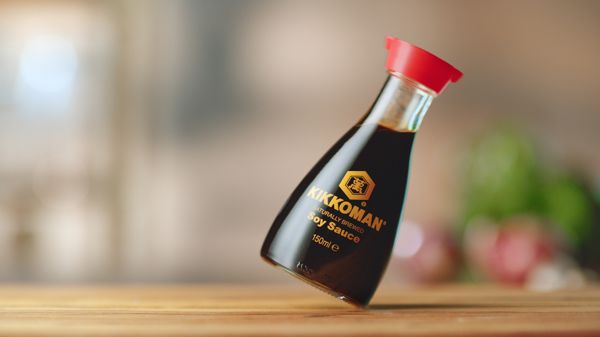 “Objects have their own world. Making an object means imbuing it with its own spirit,” said Kenji Ekuan, a Japanese industrial designer. He and his family moved to Hiroshima from Hawaii at the end of the second World War, which coincided with the detonation of the Little Boy nuclear bomb upon the city, in 1945. Ekuan’s sister and father died in the explosion, and the loss and devastation drew him to creation. He said he heard the voices of “mangled streetcars, bicycles and other objects” ravaged by the blast, and lamented that their design and purpose were now corrupted. “Faced with that nothingness, I felt a great nostalgia for human culture. I needed something to touch, to look at. Right then I decided to be a maker of things,” he said.

Ekuan’s greatest achievement in industrial design is not the E3 Series Shinkansen Komachi train, nor the Yamaha VMAX motorcycle, nor the E259 series Narita Express train. His most famous creation is the Kikkoman soy sauce bottle, formulated in 1961. “It was his masterpiece,” said Makiko Tsumura, international manager of The Japan Institute of Design Promotion. “Soy sauce was already an essential part of Japanese cuisine, but it was always in large and heavy bottles. The president of soy sauce-maker Kikkoman asked him to develop a smaller bottle that would be easy to stock but also acceptable on the table of a home.”

Remembering how his mother would tip and pour these large canisters of soy sauce, Ekuan designed a bottle which was light and teardrop shaped for convenience and character. “Just like a man is born, and becomes old, ill and dies… even in a factory things are born, they have very useful years, and then finally die. It’s all the same,” the industrial designer said in an interview. Here’s the news.

No More Heroes has been rated for Switch in Taiwan

“We’re currently in talks with [intellectual property holder] Marvelous to make that happen,” said Suda 51 to Dengeki PlayStation regarding taking the game to new platforms. “It’s in positive consideration, so I hope we’ll be able to make a good announcement.” That was in 2019, and the appearance of a new rating for Switch is a cheering sign. No one has confirmed anything yet, so we’ll keep you in the loop once we know more.

In an interview, co-founder and CEO of Hutch Shaun Rutland discussed his motivations for starting his own studio. “I got into Lionhead Studios as an assistant producer. And that was like my dream job working to Peter Molyneux working on Fable so it was like, ‘Wow, this is very exciting,’” said Rutland. “There I was quite blown away by the sheer size of the productions. I think it was, like 110 people, something crazy. Well, and how hard that was.”

A new Fable game from Playground Games is on its way to the Xbox Series X, though it’s not clear whether it is a new story or a reboot of the original 2004 title. Let’s hope that it’s smooth sailing for the new team on the new Fable.

“Obviously, we don’t speak for the industry and the industry naturally does not coordinate on these matters, to say the very least,” said Zelnick in an interview with Games Industry. “And from our point of view, it’s an extremely modest price change given that prices haven’t changed for a very long time.” Take-Two is a massive publishing force, owning several publishers and some of the biggest franchises on the planet—including Grand Theft Auto—meaning that its position on this issue is a very weighty one indeed.

“Every woman deserves to feel represented and beautiful in her own skin. Everywhere,” said the company in the announcement. “Which is why we created our NEW Animal Crossing Fashion Line designed for players who want to replicate the look of their IRL skin within the game.” The Skinclusive Summer Line includes swimsuits and summery fashion with nevi, wrinkles, cellulite acne, eczema, vitiligo, and more. All in all, there are 264 designs across 19 skin types, created with the 8 in-game skin tones.” These designs are accessible through the Custom Design Portal in the Able Sisters shop, as long as the player has a Switch Online subscription.

Fallout: New Vegas director is working on a new game at Obsidian Entertainment

Josh Sawyer, director of Fallout: New Vegas, Pillars of Eternity, and Pillars of Eternity II: Deadfire, is busy on his “own project” at Obsidian Entertainment. He took to Tumblr to explain what his role as a studio design director entails, and it appears to be a lot of meetings and reviewing and meetings again. Someone replied to the post through Twitter and misinterpreted Sawyer’s everyday goings-on to be hands-off. The veteran game designer clarified that he is “directing my own project now (it’s just not Avowed).”

“It’s something I’ve been talking to Feargus [Urquhart, CEO] every once in a while for the past couple of years and he’s been supportive,” said Sawyer in 2016. In any event, we will have to wait and see what the director is working on, as the studio ushers Grounded, The Outer Worlds DLC, and Avowed out of the door.

PlayStation 5 criticised for not considering accessibility options for disabled gamers

Can I Play That, a website dedicated to gaming accessibility, pointed out that the PlayStation 4 controller has often been altered and modified in ways which help disabled gamers enjoy their games. Because PlayStation 5 games will only be playable with the PlayStation 5 DualSense controller, this locks out those who use their own controller. “We believe that PS5 games should take advantage of the new capabilities and features we’re bringing to the platform, including the features of DualSense wireless controller,” explained Sony in the announcement.

PlayStation’s own accessibility specialist has expressed his disappointment with the announcement, which is probably not a good sign. “Haven’t been looking forward to this announcement. Always doing what I can behind the scenes though,” replied Mark Friend to Gohil’s post. “There’s nothing I can say at present, unfortunately. But watch this space. If / when there is accessibility news to announce I’ll definitely be making sure the message gets out there!”

That’s right, Eivor can scoop the little furry bastards up for a cuddle. Brilliant. Also, the cats in the game are positively huge, which makes me think that they’re probably an ancestor of the Norwegian Forest cat. This breed, stocky and majestic, were brought from Norway to England, and are adapted to harsh climatic conditions.

Their coats consist of a water-repellent top layer and a woolly undercoat and they are fluffiest on their legs, chest, and head. Well-suited for traipsing through snow, I’ll say. And, Norse legends tell of the skogkatt, a “mountain-dwelling fairy cat with an ability to climb sheer rock faces that other cats could not manage.” If we gave a “news of the week” award, this would win. Hands down. Brilliant stuff.

Bugsnax has crafty contraptions and a Mothra made of pizza

On the island of Snaktooth, there are animals that resemble foodstuffs, named Bugsnax. When caught and consumed, the Bugsnak will cause parts of the character’s body to change into that particular food.  Riffing off of Pokémon Snap, the player will have a camera, which will catalogue the edible animal in an as-yet-unconfirmed-as-edible encyclopaedia, and it seems that this will be a “scan and capture” operation.

The player will also have access to a variety of contraptions, like a crossbow, slingshot, laser, tripwires, and more. In addition, there may be a conspiracy to uncover. Honestly, who else is doing it like Bugsnax?