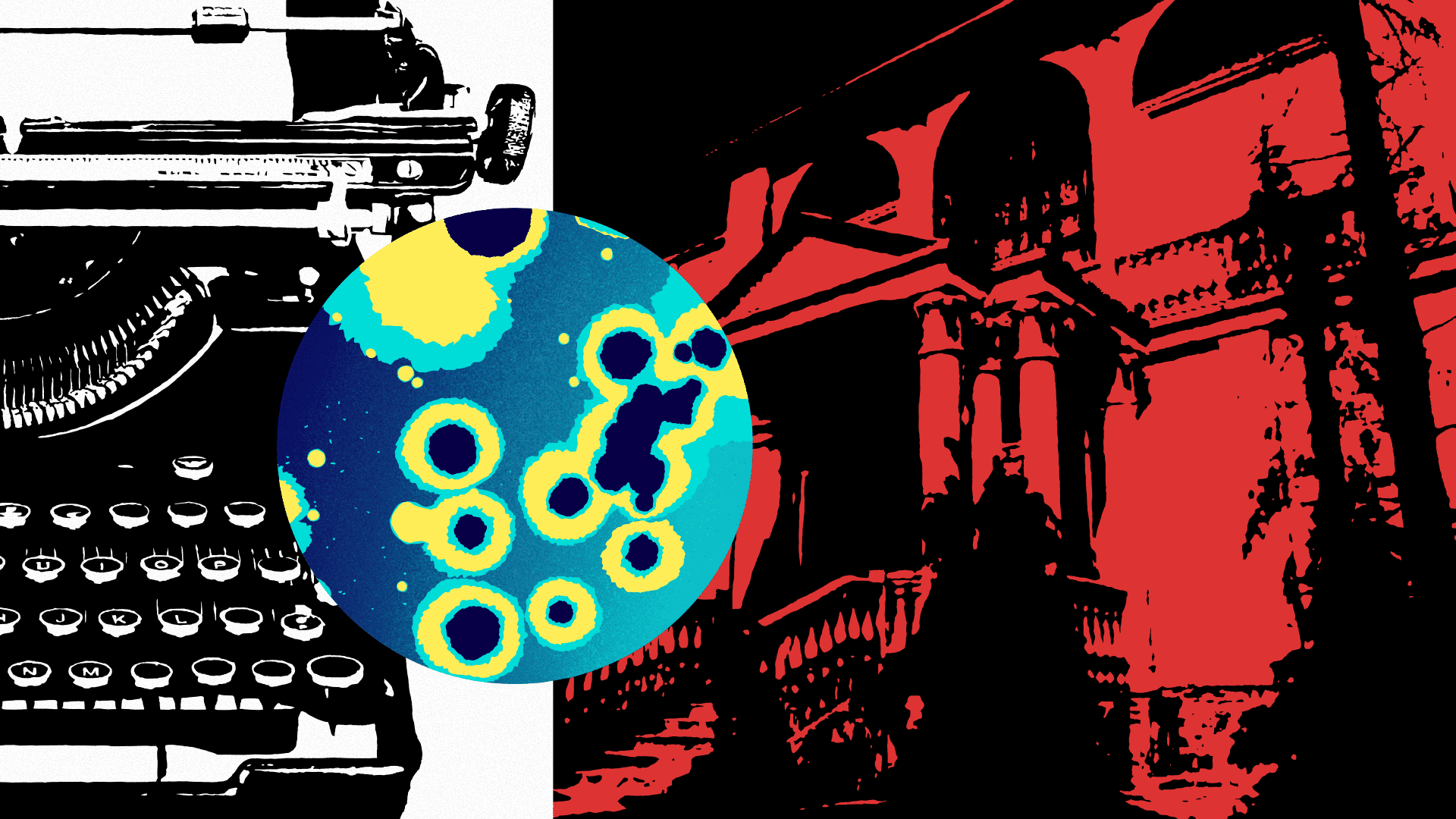 The other night, in the small hours, something strange happened. There I was in bed, in a dark room with the blinds drawn, staring into a Nintendo Switch and knuckling away the sting from my eyes. What furnished the screen was carpet, wallpaper, candlelight, and panels of carved wood. And what echoed through my headphones was the ticking of a grandfather clock, the soft crash of thunder, and the beating of boots against marble, rug, and stair. These, in other words, were the fittings of Victorian horror—the kind of pleasurable discomforts that creak through the pages of Horace Walpole and M. R. James. Only, they might frown at the Beretta 92FS in our hero’s hands, considering it not only ungentlemanly conduct—liable to offend the good tastes of polite society—but unnecessary for the cultivation of a good chill. The game was Resident Evil (2002), and the strange thing? I was scared.

Why should this be a revelation? Do the Resident Evil games not aim to freak us out? In recent years, it’s fair to say that their aim has faltered. Resident Evil 7—leaning on another literary tradition, that of the Southern gothic—was set in Louisiana and sought to fry our nerves with a first-person viewpoint, a cramped plantation house, and a family of weirdos. These were the Bakers, whose spirits remained homicidally high while their bodies were brought low by a malevolent fungus. The game started promisingly enough, with its protagonist, Ethan Winters, wading through a swamp and catching flickers of something out of the corner of his eye. Sadly, the whole thing wound up thoroughly unwound, with the family transforming—or deflating—into deeply unscary forms and the plot ending up equally half-baked.

That entry was a sober corrective to Resident Evil 6, which had a roster of noble intentions—from topping Gears of War at its own game to tracking what felt like nine storylines—but scaring us was low on the list. The most recent in the series, Resident Evil Village, took flight to Eastern Europe (Romania, it is implied), in order to incorporate vampires into the clotted flow of its tale. Again, what began in tension, all ice-locked houses and fretful locals, culminated in Ethan strapping himself into a giant robot with a chainsaw for an arm and clomping into combat with another, similarly equipped rival. Never has there been a more perfect image for the bolting-on of mechanical bloat, and the ironing out of horror by the heavy-slogging churn of the blockbuster.

Has there ever been a Triple-A game to really make us tremble? By my count, there are two that come close. The first is Alien: Isolation, which was set aboard a space station run by the ailing Seegson Corporation, and published by the ailing Sega Corporation. Despite its pleasingly low-rent atmosphere, it was likely bolstered by a Weyland-Yutani-sized budget, though we don’t know for sure. The second is Resident Evil—to be precise, the remake of Resident Evil, which now celebrates the twentieth anniversary of its western release. Let us note the resemblance between these two games. Both feature haunted houses, one drifting through space, the other mouldering in the woods; both hinge on sequestered souls, considered expendable by gloomy corporations; and both were met with modest sales. The most telling similarity, however, is that for all their polish they both achieve results with the cheapest of props. A groaning set of stairs. A large clock. A long corridor. A few drips of silvery drool.

Resident Evil begins in the troubled air above the Arklay Mountains, a range of fictional peaks, carpeted with fir trees, in the American Midwest. A helicopter, bearing an élite  echelon of the local police force—the Special Tactics and Rescue Service, or the S.T.A.R.S.—has been dispatched to look into the disappearance of another team, who went in previously to investigate a string of killings. “Bizarre murder cases have recently occurred in Raccoon City,” we are told. The voice belongs to Chris Redfield, who briefs us on exactly what flavour of bizarre we ought to expect. “Victims were apparently”—pause—“eaten.” Everything we need to know is in that pause. Not only does it indicate Chris’s rookie status, as green and rooted as his surrounds, but it seems to reinstate a rightful fear that had been chewed out of these games.

The remake arrived only six years after the original, but in that time the series had swelled to seven titles—three sequels, a pair of light-gun shooters, and a Game Boy spin-off. The dread that had festered in the first game had spread, to the city and beyond, and zombies had become old and crusty news. Hence the relief that breaks out when we see the subtitles: “Jul. 1998.” These don’t just flash up but are typed out, with the unmistakably creamy clack of a period keyboard, and then: “Raccoon Forest.” As a general rule of geography, the closer you are to Raccoon City the better the game will be. The Spencer Mansion, in which Chris and his spangled company—most notably Jill Valentine, Barry Burton, and Albert Wesker—alight, is something of an orbiting moon. The city is not far off, and, while it may be the epicentre of the chaos to come, that is only because it’s lapped by a tide that emanates from the halls, and the dark underside, of this pale and lonely place.

It’s apt, then, that at one point we hear Beethoven’s Piano Sonata No.14, better known as the Moonlight Sonata, played—first haltingly, and later with a lingering smoothness—on a grand piano. That piece is a calling card of the game’s director, Shinji Mikami, who can recently be heard performing it in Ghostwire: Tokyo, spreading his directorial lunacy across works in similar fashion to Hitchcock, who liked to haunt his own movies by appearing in them. Whenever I think of Mikami, my mind drifts to Hitch. In Resident Evil, we get Mikami the fetishist of twentieth-century objects (desks, telephones, lamps, typewriters); Mikami the keeper of birds—crows who perch, cawing in an eager unkindness, on an overhead rail; and Mikami the master of suspense, fastening his camera to corners and holding his horrors out of sight. Plus, we also get Mikami the perfectionist. Just as Hitchcock returned, over twenty years later, to The Man Who Knew Too Much—deciding that it would benefit (as indeed would most films) from the presence of James Stewart—so Mikami went back to Resident Evil.

One question we might reasonably ask is: Why? Half a decade is hardly a long wait; what should compel Mikami to dig up his corpus, when it has barely had time to go cold? In conversation with François Truffaut, on the subject of his own revision, Hitchcock said, “The first version is the work of a talented amateur and the second was made by a professional.” But it was hardly the case that Mikami’s original, from 1996, was the effort of a man who knew too little. On the contrary, it seemed to arrive fully formed; the elements of fear were in place, like well-ordered furniture, and though its surfaces, on the PlayStation, were crunched and quivering, that did little to dilute its shock.

The answer, I think, is not that Mikami was perturbed by his earlier creation, racked by the artist’s urge to fuss and fix, rather the opposite; his conviction in the designs of old was unshaken, and we had merely to be reintroduced to them to be disturbed afresh. Hence the conservative approach of the remake, with its phlegmatic controls, scarcely rationed bullets, and pre-rendered backgrounds. Many like to cavil at the controls of old Resident Evil games, or to point out that the flat backdrops are a sneaky trick, affording only a sumptuous façade; and, if I had my way, they would long have shut up about it. Resident Evil still is, put simply, the most beautiful game I have ever seen; that it happens to entail a bathtub of black water draining to reveal an engreened and dropsical foe is a pleasing irony.

It launched exclusively on the GameCube, and I like to imagine it clawing out from the same purple pasture that reared such kid-friendly accomplishments as Super Mario Sunshine and Animal Crossing. That the GameCube was capable not just of such matchless graphical oomph but of such nastiness was a delicious surprise at the time; the back of my original copy is adorned with a single bloodied figure, in a shirt the hue of sour milk, and a dazed promise from Official Nintendo Magazine: “It will scare you rigid.” Indeed, the game’s abiding power is perfectly summarised in our first meeting with a zombie: we find the creature, with skin like cracked paint, doubled over one of our dying comrades, munching away; slowly, it turns in our direction, with a lidless glare, and lurches toward us in a boxy, four-walled foyer. The whole encounter lasts less than a minute, and it is still more than enough to honour the tag line, one of the best and dumbest ever written: “Pure Terror Cubed.”

How much is left of that terror now? In the moment—as you are sat up in bed, say—its effect is undiminished. Mikami’s basic strategy is to daunt: to have us retrace our steps, for elaborate and trinket-laden reasons, through hallways that we know to harbour monsters. (Walpole and James would look on with approval.) It is a fine strategy when it comes to shredding our sense of wellbeing, and no game since has captured the same trepidation that sets in as you ponder your next trip; but there is nothing left, after you have stopped playing, to trouble your conscience or your sleep. The characters in Mikami’s game are beset by ranks of the restless dead, giant snakes and spiders, rabid dogs, and even a mutated shark, but these are stock phobias, culled from a list of old favourites, and they tell us little of the fears within.

Compare the stranded folks who drift through Silent Hill 2, whose main problem is that the fears within won’t damn well stay there; they thicken on the air, and gust like static through their hours, scratching at the memory and refusing to dispel. An hour in that place and my entire week is smeared with unease, in part because its traumas, two decades on, lie unresolved. Resident Evil, on the other hand, ends with the mansion blown to bits, while Chris and a couple of allies catch a rescue chopper into a dream-bright day.

Not that we ought to confuse the hunger for narrative resolution—the need to burn off the fog of nightmare before we wake—with ill discipline, or creative weakness. All is not well that ends well, and Mikami knows it; just because the end of Resident Evil looks like a hokey vision of heaven, that doesn’t mean he hasn’t just put us through hell. And Mikami’s game is no less a masterpiece for its pop sensibility. It may issue in gore, as opposed to real pain (much the harder to sponge away) but its horrors, unsurpassed in the twenty years since its release, are the work of a developer who understands that we will always come back, as he did—that our craving to be kept up at night will never be sated, even as the sun floods in.