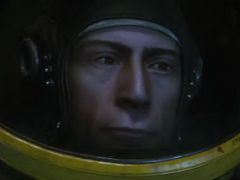 A masterwork of atmosphere and environmental design, Alien: Isolation may be standing on the shoulders of giants, but it’s also one of the few franchise games to do so that doesn’t topple off disastrously. By allowing Sevastopol – an orbital backwater of failed commerce turned supersized game preserve – to tell the story (which is good, as the plotting and dialogue is often quite poor), CA has finally nailed the true horror of Alien in video game form. It’s only taken 35 years.

As well as ad-hoc familial relationships and sexual violence and imagery, the films are about (inner)space. Scott spends a lot of time establishing the oppressive enormity of the Nostromo, and Aliens in particular is obsessed with it, all motion trackers and meter counters and marines shouting out proximities. In Isolation you can’t fight, so you must take flight, and so the obsession with space – crossing it, navigating it, using it, is the same as in the film.

The rest of the game’s mechanics dovetail expertly. It’s non-linear, similar to Metroid, so you’ll be revisiting old areas with new ways to access certain parts of the station. Along with Ron Cobb’s famous designs and the changing nature of the environment, the structure gives the game a good sense of not just progression but also of mounting despair, as Sevastopol, its population, and your chances of survival seem to disintegrate.

An early concern was pacing, and while the game is long (over 12 hours at least) and your tasks fairly repetitive it’s the Alien itself – and your relationship with it – which proves the key to keeping things fresh. An adept hunter with a keener sense of sound than sight, it’s merciless and cunning. And yet once you’ve feared it, you’ll naturally start to respect it, around about the same time you acquire the tools to stand against it. Not necessarily toe-to-toe, but after hours of being afraid – and you will be scared, if for the sheer physical power of it, towering in height and startlingly quick to intense violence – the Alien starts to (slightly) change its attitude towards you.

It’s a sublime shift, and one that near-totally changes the dynamic of the game, enabling it to keep your attention throughout. There are issues: it has about 17 endings, the first Alien encounter is clumsy and irritating, and the hostile human/android element doesn’t add much other than frustration. On Hard, the recommended difficulty, you’ll be hiding so much it might as well be called Lord Lucan Simulator 2014.

These are minor quibbles however, in the face of an Alien game that asks you to think, rather than fight, one that recognises that the haunted house itself is as scary as what’s in it.

CA has finally nailed the true horror of Alien in video game form. It's only taken 35 years.
9 Superb environmental design. Creature is genuinely terrifying. Human element is an annoyance. Cutscene writing is poor.