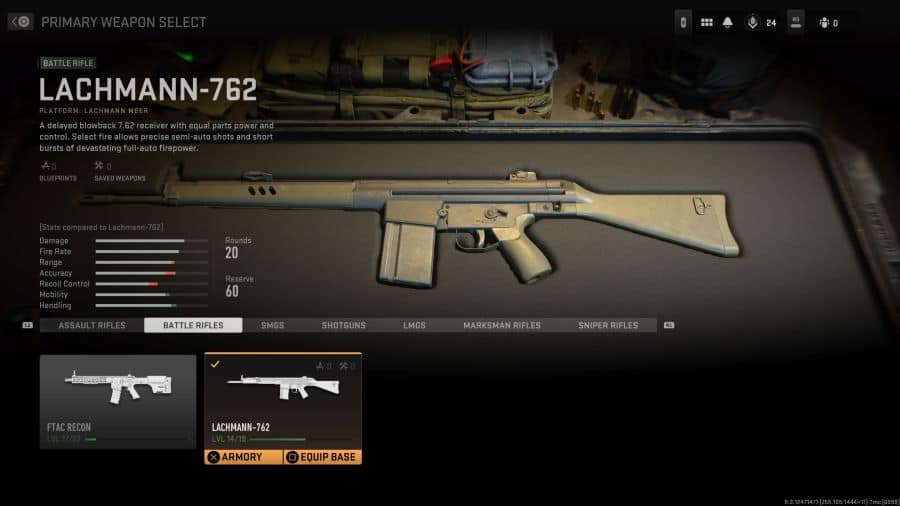 We’ll help you construct the perfect Lachmann-762 loadout with our Modern Warfare 2 guide.

As a Battle Rifle, the Lachmann-762 is a powerful option that allows you to dominate the battlefield. While its recoil control could certainly be improved, you’ll soon forget about this drawback when gunning down your foes with the Lachmann-762.

The Lachmann-762 boasts impressive versatility, able to switch between concentrated, accurate burst fire and short periods of full auto. Choose between accuracy and stopping power as the situation demands, and you’ll be able to clean up whole teams of opponents.

Modern Warfare 2 – Best Perks to Equip With the Lachmann-762

The Scavenger perk allows you to loot ammunition from dead foes, ensuring that you’ll remain stocked up on ammo even when liberally using full-auto fire. Not having to focus on resource scarcity frees you up to use whichever firing option suits you best from moment to moment.

Periods of vulnerability in Modern Warfare 2 are greatly shortened by Fast Hands. Reloading and swapping weapons are both sped up considerably, leaving you always ready for an enemy assault. And equipment usage is also made quicker, improving your loadout overall.

The Stun Grenade is an incredible tool for both offense and defense, grating you a wealth of new options when wielding the Lachmann-762. Enemies are left blinded and vulnerable, breaking up an assault about to overwhelm you, or helping you press the advantage and gun them down.

A tool that allows you short bursts of crucial information, helping you to locate nearby opponents and deal with them accordingly.

An incredible tool for accuracy that outshines most of Modern Warfare 2’s other attachment options.

Increased hip-fire stability increases your options and run-and-gun potential with the Lachmann-762, with reduced kick being a bonus.

Modern Warfare 2 – Best Weapons to Pair With the Lachmann-762

As the Lachmann-762 boasts versatility in its firing modes, the main compensating factor to consider for other weapons in the loadout is accuracy. The Signal 50 allows you to deal with opponents at range and offers highly accurate single-shot damage.

What Is the Best Lachmann-762 Loadout in Modern Warfare 2?

How To Unlock the Lachmann-762

Unlike many high-power options in Modern Warfare 2, the Lachmann-762 does not require you to rank up other weapons in order to unlock it. Simply boost your overall progression level to 13 and the Lachmann-762 will become available for use.