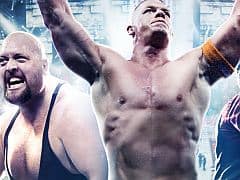 Smackdown vs Raw has been given an easy ride for far too long now. Yes, the 2011 edition will be adored by hardcore WWE fans who love the fact it’s got tens of match types, ring variations, customisable rules and all the big events, as well as a large roster of the most popular WWE Superstars, but the fact remains that very little is changing year-on-year. While developer Yuke’s has shown itself to be technically excellent at the brawling genre with UFC, Smackdown vs Raw 2011 is clumsy, incredibly rough around the edges, and at times outright ugly.

So what will WWE fans get out of it? Well, the core modes are WWE Universe, Road to WrestleMania and Create a Superstar. Universe is the glue which holds the game’s many elements together – though Road to WrestleMania plays out independently. Decide you want to fight Edge in a friendly exhibition match, and the game will schedule that into the Universe, adjusting rankings and the like after the result. There are 100 or so cutscenes that will play out at random times too, giving the sense that you’re part of a developing story. Rivals, built up over the course of a series of fights, might batter you before a scheduled match, putting you at a serious disadvantage.

The Universe is the kind of new idea that the series was desperately in need of, abut there’s very little innovation elsewhere. Road to WrestleMania, which lets you choose from a handful of Superstars and guide them through a storyline to the illustrious big event, shows just what the series is lacking, both inside at out the ring. Between matches you’re free to wander about backstage, a lifeless area so devoid of character that it feels half-finished.

Create a Wrestler, then, has a lot hanging on its potentially beefy shoulders. Thankfully it’s easily the best part of the package, equipped with all the tools needed to form your dreamt-up avatars. Even me, a man who has zero artistic ability, managed to create a recognisable version of Doctor Manhattan, complete with the hydrogen atom on his head. If you have more talent you can customise basically every aspect of a character, right down to their moves and the pants they wear.

In the ring the Smackdown vs Raw series has always been something of an acquired taste, neither falling into the sim nor arcade fighting brackets, and 2011 isn’t any different really. Some changes have been made to the grappling system, although only long-time fans will notice as it’s still handled with the right analogue stick, but dependent on the direction you push and the position of your brawler in relation to the opponent. Building momentum by successfully landing attacks will allow you to perform signature moves, although if your timing is good you can counter just about everything.

Countering and reversals are key to success in the ring, with the game flashing up the required button for the split second the move is available. Against friends it works well enough, but when playing against AI on the hardest difficulty (and you’ll want to ramp it up as on lower settings it’s painfully easy to beat even the best wrestlers) all they do is counter and reverse with almost robotic precision. It’s a real shame, as it means you essentially have to go with simple or frustratingly difficult foes.

The biggest problem in the ring is the complete lack of fluidity. Fighter’s jerk into and out of canned animations, collision detection looks and feels off, and there’s a severe lack of weight behind many of the attacks. The action feels more fake than the fabricated “sport” it’s based on, and never feels like you’re fully in control.

Things aren’t helped by the fact that by today’s standards, with UFC and MMA being the most obvious points of comparison, Smackdown vs Raw 2011 looks severely dated. There’s a notable visual softness, making the graphics seem sub-HD, but worse are the laughable physics – an area in which the game has supposedly been improved since last year’s effort. When fighters crash into tables or ladders fall over, it looks hysterically bad – and the less said about the wide-mouthed lip-synching, the better. Throw in the frankly abysmal backstage area, and you’ve got a game clinging onto the previous generation instead of embracing what is possible with current hardware.

Yet, and it’s hard to understand exactly why, I found myself strangely enjoying the whole experience. Maybe it’s a latent love of a form of entertainment I thrived on as a kid, or the fact that when my Dr Manhattan enters the ring the crowd have signs saying “Show me your blue penis”; either way, it’s unquestionably fun. But that doesn’t excuse the many, many problems, most of which should have been ironed out when the series was a PS2 exclusive over five years ago.

The question is whether or not we’ll ever get the changes this series so desperately needs. Without any form of competition and a legion of hardcore fans, financially is there any reason for Yuke’s and THQ to do anything more? Sales will give us the answer, but for now you can either stump up for the same old game and make the most of it despite the flaws, or make a stand and keep the money in your wallet.

A game clinging onto the previous generation instead of embracing what is possible with current hardware.
6 Universe is an innovative addition Create A Fighter is extensive Ugly and lacking in fluidity Badly needs new ideas