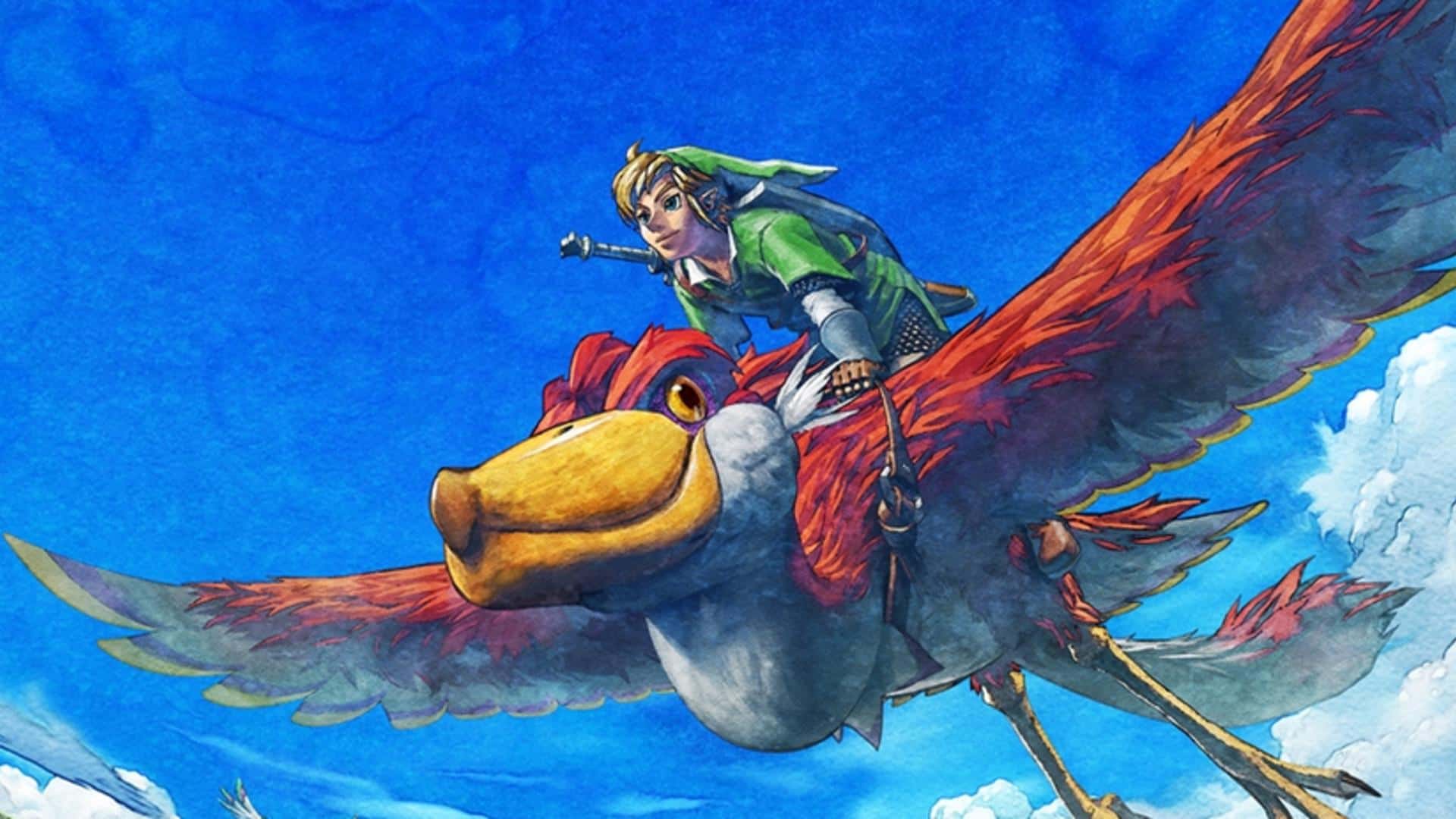 I was relieved to find, within the first five minutes of The Legend of Zelda: Skyward Sword HD, a toilet. There I was in Skyloft, a town of blessed souls hanging in the firmament, borne on banks of white cloud, and the hero, Link, was sitting in a lavatory. Instantly, any sense of the unreachably mythic, of a place beyond the solid grasp of history, floating along on wisps and whispers, was flushed away. Supposedly, this fair isle was rescued from the blight below by a goddess, a statue of whom now stands guard over the good people; but, unlike the self-possessed citizens of Columbia, in BioShock Infinite—who were also watched over by a winged figure of stone—Skyloftians aren’t lofty. Despite their position, they don’t seem to consider themselves as being above anyone else. Though, I do wonder where the plumbing goes.

Link is a trainee knight, learning and boarding at an academy. This year, the uniform for successful graduates happens to be a rich, and recognisable, green. He has a thing going with Zelda, who is not yet wreathed in royalty or legend; this is, chronologically, the origin of the series, so we see a slew of recognisable flourishes taking flight for the first time. Speaking of which, Link’s preferred form of transportation is not his traditional steed, Epona, whose hooves would be no good in the heavens, but an unnamed bird, known as a Loftwing: a scarlet-feathered mount with the head of a shoebill—and thus the inbuilt blend of smirk and frown, as if spoiling for a fight. Link can jump from any of Skyloft’s jetties and whistle for this creature to catch him, like Tony Stark summoning his suit, mid-fall, as though it were a taxi. 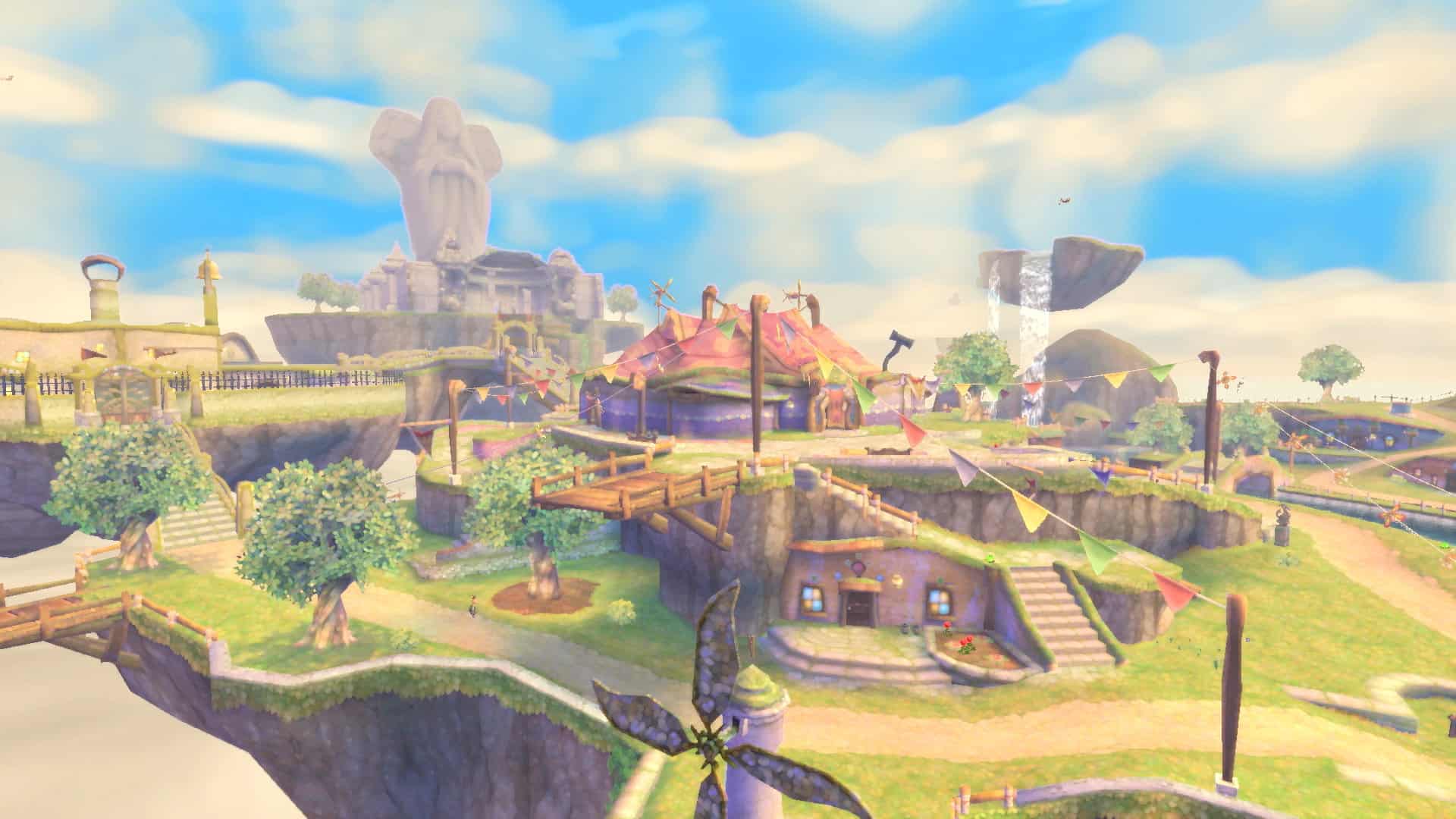 The early hours of Skyward Sword are a daydream. You aren’t set loose in a fantasy as much as locked into one. If its airy vision now feels squeezed and linear—especially after playing the sequel, Breath of the Wild—the spectacle of Skyloft is still a thrill. It is, in more than one sense, breathless. The art direction, originally led by Ryo Koizumi, has been touched up, for this HD rerelease, by Tantalus Media (Ayden Polat is lead art director). The same studio worked on Twilight Princess HD, in 2016, and I must stop doubting them. If there was one thing that didn’t need highly defining, I thought, it was surely dusk—whose poetry depends on the lowlit blur of a day’s end. But no: shadows can be sharpened while preserving their ambiguous potency, just as the smudged tones of Skyward Sword appear to have been soft-washed, without losing their noonday haze.

I remember feeling shortchanged, back in 2011, when I laid eyes on Skyward Sword. The art style—always a sticking point for Zelda fans—seemed a compromised rehash: the character designs were drawn from Twilight Princess but pasted with the radiant colours of The Wind Waker. What’s more, people kept going on about the impressionism of the visuals, as if Link were hacking his way through a Monet. Now, however, I appreciate the look of the thing. I’m especially a fan of Zelda’s hair—a helmet of golden hay, bound up into swaying bales, with a blunt fringe that frames her face. The environments, meanwhile, have a clean luminescence; we still get good gloom, but it doesn’t seep into the mood like it did in Twilight Princess. The cel shading banishes the emotional shade. 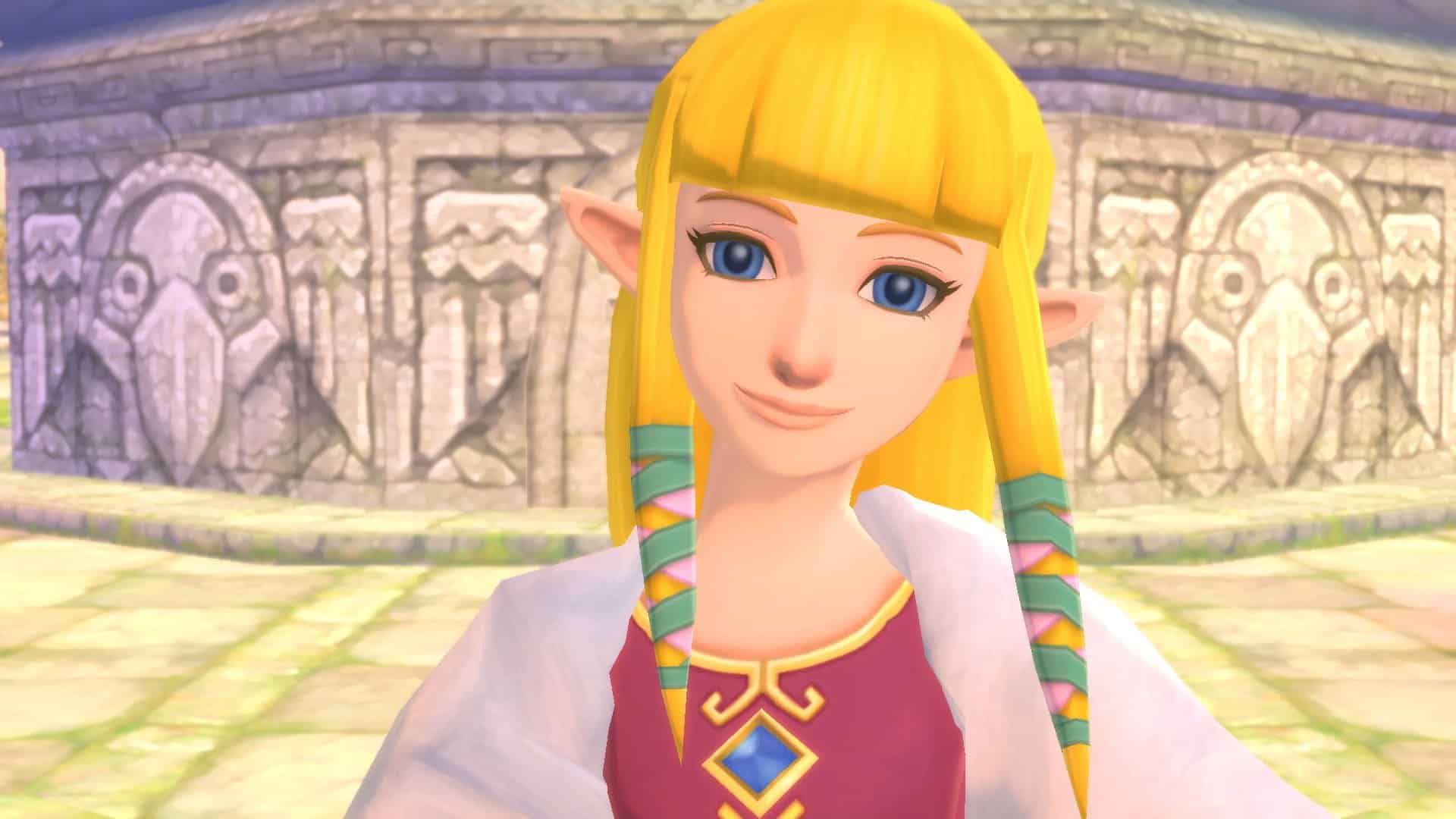 After cruising to victory in the Wing Ceremony—a rite-of-passage race that resembles a game of Quidditch—Link is asked out on a date. “You think maybe you’d like to, you know, go fly around the clouds together?” says Zelda. How very forward of her; I don’t remember the Zelda of Twilight Princess, for all her pluck, asking if Link would like to, you know, go howl at the moon. In other words, Skyward Sword has a grown-up streak—no gore or gouts of foul language, just a nicely calibrated knowingness at its edges. This incarnation of Zelda is one of the few who don’t really need rescuing. Even as the pair are pulled into a sandy cyclone and hurled apart, she doesn’t wait for him; she strides to meet her fate head-on, as he gives desperate chase. Faithful and panting, there is something doggish about this Link. His usual brand of bravery seems here more like innocence, coupled with confidence, and the wide blue of his eyes betray someone whose head is still in the clouds.

Like hero, like producer. Indeed, Eiji Aonuma has proved that, in the making of games, the clouds are the best place for one’s head—the irony is that he may well be the most grounded creative hand in the industry. He has worked—as either director, producer, or supervisor—on every Zelda game since Ocarina of Time. Whenever innovation has been required, he has blown through the series, waking it up, getting it back on track, and breathing wildness back into its bones. He knows not to lean on the past, but he keeps its links alive. The defining feature of Skyward Sword isn’t a wolf or a wind instrument; it’s the Wii, or at least it was. Motion controls were at the heart of the adventure, and, in truth, there was rarely anything skyward about it; I remember a lot of time spent jabbing screenwards and waving dangerously windowwards, with that flimsy strap tethered to my wrist. 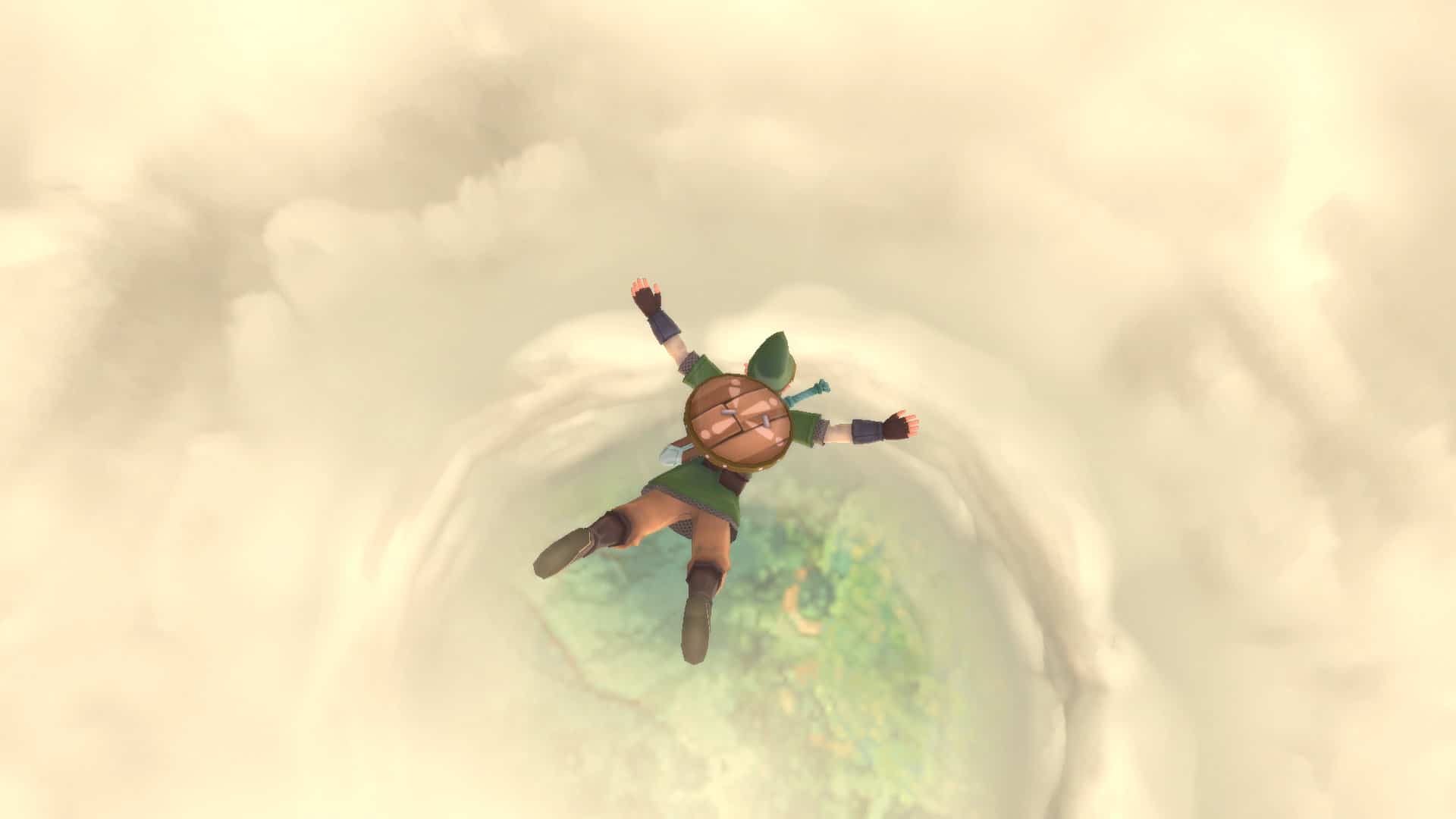 The best thing about the HD version is the addition of button controls. They aren’t perfect: you have to hold a shoulder button to swivel the camera—quite why there isn’t an option to toggle this I have no idea—and the movements of the Wii Remote, infused as they were with Wii MotionPlus technology, are mapped, minus the swashbuckling zest, to the right stick. Oddly enough, with the motion controls waved away, the game becomes more, not less, about controlling motion. You have a strange relationship to the world, touching, tipping, and slicing it from new angles. There are locked doors with eyes that stare at your sword, which must be traced in circles to dizzy them into opening. There are bridges across chasms that can only be lowered by cutting lengths of rope.

Combat—which reached a frenetic peak in Breath of the Wild, with its parries and its pockets of slow motion—is somewhere between a dance and a bout of Simon Says. Your foes guard left, right, high, and low, and you must lunge at the openings. It’s not challenging, but it is fun—always the camp in which Aonuma would rather land. Elsewhere, text is now skippable, and Tantalus has trimmed back the irritations of Link’s companion, Fi. Thinking about the game again, a decade later, I shuddered at the thought of her. Half-ghost, half-software, she haunted your sword, springing from its blade like an unwanted pop-up, and chirping about percentages and probabilities. She wasn’t a patch on Midna, and there was always something freaky about her—the vacant eyes, the plasticky sheen, the electronic trill of her voice. Now, she is still on hand to comment, signalled by a glow of the hilt, but she doesn’t interrupt; she can be invited to chime in or politely declined. 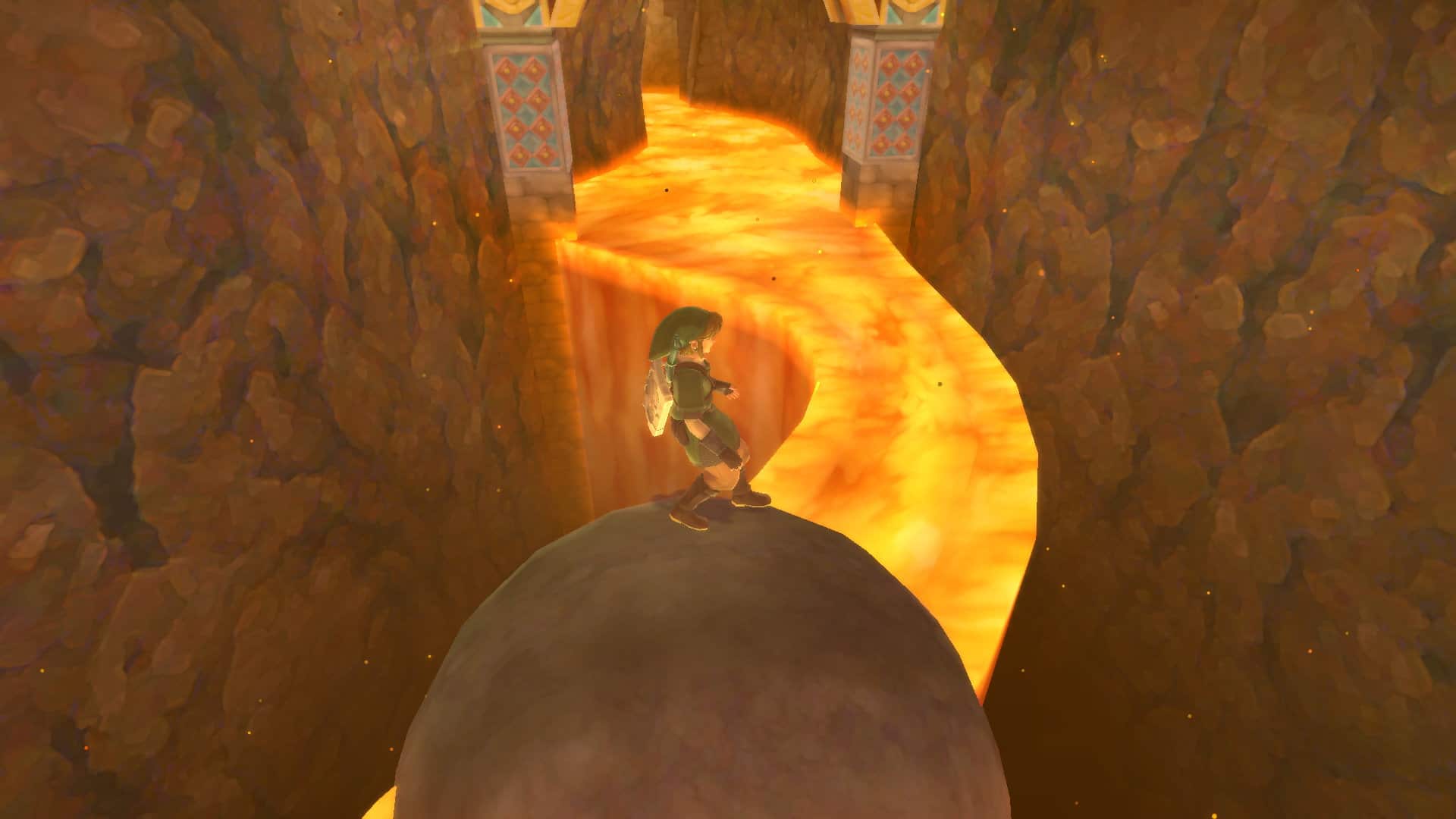 Where freakiness is welcome is in the form of the game’s villain, Ghirahim. “In truth,” he says, “I very much prefer to be indulged with my full title: Lord Ghirahim.” My mistake. He’s flamboyant; his body is sealed in spandex, with diamond-shaped holes cut down the legs; he has a single, dangling earring; and his hair, white as a sheet, cascades over one eye like a frozen waterfall. Think one part David Bowie in Labyrinth to two parts harlequin. He says that he “presides over this land you look down upon, this world you call the surface,” but the way he looks he could happily preside over the nineteen-eighties.

Ghirahim’s scenes crackle with a creepy power, and he pulls you through the story. Not that Skyward Sword lacks pace or requires distraction; it has some of the best dungeons in the series, configured and tuned to a perfect pitch of challenge and playful experimentation. Check out the Lanayru Desert, which has you striking crystals to reverse the temporal flow; evidently, it was once a lush and grassy land, and, as time leaks out and pools over the dunes, it turns the sand back into fecund sweeps of green. Before “Effect and Cause,” in Titanfall 2, before “A Crack in the Slab,” in Dishonored 2, Skyward Sword delivered the spectacle of a single space being riven and rerendered by time in front of our eyes. It’s not quite that I had forgotten how good it was—more that I needed the intervening years to realise it. To take us to a place inhabited by past and present all at once: such is the task of the remaster.

You would be forgiven for assuming that, after the boundless freedom of Breath of the Wild, the series couldn’t possibly return to its old ways. Yet Nintendo has been keen to remind us that the opposite is true, remaking Link’s Awakening in 2019, and now offering us a second look at the last entry done in the classic 3-D style. The sequel to Breath of the Wild is on the way, and we have glimpsed some of the wonders that lie in wait. But with Skyward Sword HD, Aonuma shows us the joy of looking back. The sky may be the limit, but history is always within our grasp.

It’s not quite that I had forgotten how good it was—more that I needed the intervening years to realise it.
9 Dungeon design Art style Eiji Aonuma