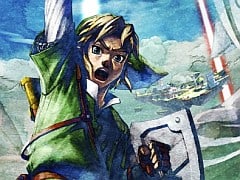 It’s no surprise that Zelda has historically been a bit of a magpie. It does, after all, tell the story of a boy who destroys the property of others in a ceaseless search for shiny things. In the past, however, it’s always been the narrative that has borrowed, its worlds and legends steeped in fantasy and fairytale, with a dash of contemporary heroism as seen in the films of Lucas and Spielberg.

But with Skyward Sword, Nintendo pilfers ideas not only from Zelda’s past, but its own back catalogue. Link now shares a little of Mario’s athleticism as he scampers and leaps, a blur of green compared with the casual jogger we all know and love, even if a stamina meter holds him back from a constant sprint. It’s there, too, in the generosity of ideas, which echoes the recent work of EAD Tokyo – though unlike Galaxy and its sequel, it doesn’t frivolously fritter away its best ones, making the most of ingenious concepts without falling back on them too frequently.

At other times, it’s as if Link has the blood of Samus Aran flowing through his veins. There’s a nod to the Prime series in the first-person sequences that see you searching for items or characters with your sword’s dowsing ability. And as with Metroid, defeating a boss doesn’t necessarily mean you’re done with that area, as new toys tempt you back for repeat visits. You’re constantly aware of places you can’t immediately access, encouraging you to return even before Nintendo employs environmental trickery to turn familiar places into something almost unrecognisable. It’s thrifty, but intelligently so, and Nintendo packs its expansive environments with enough secrets that backtracking is never laborious. Warps and save points are scattered liberally throughout each area, minimising repetition and ensuring you don’t have to cover too much of the same ground after a game over.

There are, then, a few changes to the core formula, though Nintendo hasn’t broken the mould here. Zelda is, after all, a game about routines and rituals – so much so that its story begins with one. We might moan about lack of innovation, but the number of 3s in this winter’s release schedule proves how much we secretly love familiarity. Here, Nintendo expertly blends old and new; some of Link’s most familiar toys arrive later on, with fresh gadgets introduced in the opening hours. The star of the show is one of the first items Link puts in his pouch: a flying beetle that, together with a later upgrade, helps Nintendo conjure some of the most inventive puzzles you’ll see in any Zelda game.

They don’t just come in the dungeons, either. Simply getting into temples is often a trial, with environmental conundrums spreading out into the field. Some are ostensibly little more than fetch quests, yes, but they’re entertaining ones that give you greater pause to consider the overworld, as well as what lies beneath. An early task sets the tone: find five pieces of a key to unlock an ancient mechanism. You’ll roll your eyes at first, but obtaining them all is as satisfying as anything that follows once the doors have finally juddered open. Not only that, it gives you a familiarity with the environment that’s useful for when you have to return, if only to see just how playful Nintendo’s level designers have been while you were elsewhere. At one point, the series’ fondness for dual worlds manifests in an extended sequence where you explore an environment’s past and present simultaneously. By this point, you’ll wonder if Nintendo is simply showing off.

At times it feels like a culmination, an acme; an amalgamation of every bit of design knowhow Nintendo has amassed since Donkey Kong. It’s streamlined and slick, yet isn’t afraid to drop the pace, or to tempt you away from the main story thread with asides and collectables. There’s a sense of scale to both the proto-Hyrule land below the clouds and Link’s home above them, yet it isn’t nearly as sparse as Ocarina of Time or Twilight Princess could be.

Above all, it demonstrates everything that Nintendo has learned about motion control in five years, revealing Twilight Princess’ basic pointing and shaking to be little more than a dry run for the real deal. It shows how far Wii has come – or should have come. The subtle brilliance of the MotionPlus setup has its roots in, of all games, Wii Sports Resort. WuHu Island’s biplane flyover is there in the gentle tilts and swoops that guide bird and beetle; Link’s crimson steed is a particular delight, its responsive turns complemented by the satisfaction of a simple up-and-down flapping motion to ascend. There are brief skydiving sequences as you descend from Skyloft to the proto-Hyrule below, or as you leap from your bird to grab treasures from tiny islands amid the clouds. There’s even a spot of bowling as you roll bombs into small gaps.

Motion turns combat into a thrilling real-time puzzle. Smaller enemies in past Zeldas were often little more than an annoyance, something to slow your progress to the really good bits. Here they’re an opportunity to show off your skill, to toy with your foes. Some need a simple swipe to dispatch, but Bokoblins are more of a challenge, demanding that you open them up before you take them down. Dodge back, leap forward and slash, spin, or simply wait for an opening and strike: MotionPlus reads your intentions perfectly with a subtle twist on one-to-one motion, as your swipes are smartly translated to bold horizontal, vertical or diagonal strikes. It’s more direct and aggressive than its WuHu equivalent, that’s for sure. There’s a concession to simple gestures in a move designed to finish off grounded foes, but as a flourish to end an encounter it never stops being satisfying.

Even the menu system is ingenious, eschewing pointer controls for simple movements that allow quick and easy access to the items and objects in Link’s pouch. Around a dozen hours in, muscle memory sees you flicking the remote casually to instantly switch between weapons, a boon for a few of the boss battles where the challenge spikes, even as the plentiful recovery items allow you to make a few mistakes.

It’s all bolstered by a storyline that is at once sweetly old-fashioned yet brilliantly written. NPCs might only have a few lines each but they’re rarely wasted, while simple AI routines and looped animations colour in the personalities sketched by their dialogue. There’s more of a romantic flavour in the relationship between Link and Zelda, and their early scenes together in particular are disarmingly sweet. Yet she’s no sappy love-interest. Instead, she’s a girl who has to fulfil her destiny just as Link does. It’s telling that for much of the game you’re not saving her, but simply trying to catch up.

And then there’s Fi, Skyward Sword’s Navi replacement, who represents all that is good about Skyward Sword. She’s both advisor and statistician, coldly reading out Link’s probabilities of success in a voice that imagines the crazy idea of Skip making Portal. This gobbledygook GlaDOS initially feels like an interloper, a sci-fi AI with a robotic aura that is far from Zelda’s origins in medieval fantasy. Then, as Link begins to fulfil his role in shaping Hyrule’s future, she’s suddenly transformed, slipping elegantly into sweet song or skating and pirouetting across the water’s surface. These are moments of poetic beauty, of technology imbued with magic: the kind of equation that adds up to that indefinable something this publisher sprinkles on its very best games. The Nintendo difference.

This isn’t, of course, the most technically impressive of this season’s releases, but it is a beautiful Wii game, its worlds daubed in a painterly art style that gives distant landmarks an Impressionistic look rather than shrouding them in draw distance-obscuring fog. The soundtrack, meanwhile, expertly re-imagines a handful of Zelda favourites with some subtler work that underscores the dungeon and overworld exploration, adding atmosphere without ever being particularly hummable. That, however, just makes it more enchanting when the score does soar: the title theme, whether plucked on the strings of a harp or played with an orchestra, is stirring stuff, while the in-flight music feels like a great lost Star Wars theme, its sweeping strings and bombastic brass raising the spirits as you lift off.

And lift you it will. Skyward Sword is Nintendo’s most time- and workforce-intensive project yet, and it shows in every hour you spend with it. It’s a masterful blend of taut design and boldly non-traditional controls, an adventure liberally studded with memorable moments it would be remiss to spoil. Your favourite Zelda is usually your first. For many, come November 18, that won’t be the case any longer.

Your favourite Zelda is usually your first. For many, come November 18, that won’t be the case any longer
10 A break from the formula – but not too much An epic yet intimate story Near-perfect motion controls Some of the best Zelda puzzles and bosses ever

The Legend of Zelda: Skyward Sword

The Legend of Zelda: Skyward Sword