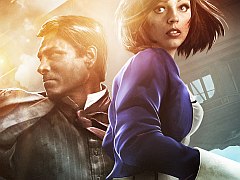 BioShock Infinite is a strange game, and one that makes a mockery of those little scores at the bottom of this and almost every other review ever. The number, that, invariably, you’ve already looked at. It’s a difficult game to put a score on because it succeeds and fails in equal number, yet isn’t average. It is fascinating, and also boring. It is important, yet forgettable. Its world is enticing and unappealing. It attempts to move things forward, yet is in places stuck in the past. For a game that has the potential to open the franchise up to a multitude of different ideas and interpretations, BioShock Infinite can feel curiously limited.

As everyone and their 12-inch collectible Big Daddy figure knows by now, Infinite is set on the floating city of Columbia: a demented paean to puritanical values and rituals that makes The Wicker Man’s Summerisle seem like a well-adjusted sort of town. Presided over by ‘The Prophet’ Zachary Comstock, it’s an interesting snapshot of America’s ills of the time: racism, sexism, fundamentalism all bubbling away, swept to one side under the veneer of America The Beautiful, heaven for believers, as long as you’re white. A WASP’s nest with plenty of sting.

Comstock himself is a standard cult leader gone mad (is there any other type?), ruling over his dominions with an iron fist and exceptional beard. His ‘nation’ represents early 20th century values taken to their (il)logical extremes. The centrepiece of his city and ideology is Elizabeth, ‘the lamb’, a young girl who wields the ability to open portals to other spaces and times. She’s imprisoned in Columbia and treated with fear and awe: it’s your job as troubled ex-Pinkerton man Booker DeWitt to get her back to New York. Do so, and your gambling debts will be wiped away by your mysterious employers. However, between a civil war, a mechanical jailer called Songbird and Elizabeth’s own headstrong personality (and Booker’s murky past), getting her out of the tower is the easy part.

As setups go, it’s a far more interesting setting than most shooters that aren’t also called BioShock. It enables Irrational to explore the blackness that hides behind the white picket fence of American life. One of your first acts involves defending (or not…) a couple from torture-as-entertainment; baseball, America’s pastime, turned into Columbia’s punishment.

In a genre mostly famed for asking no more of players than to kill everything, all the time, it’s a ballsy opening. The racial divide is at the heart of Infinite’s drama – indeed it’s heavily implied, via a museum ‘glorifying’ Wounded Knee and the Boxer Rebellion, that Booker himself may have a dark past.

Like Ryan before him, Comstock has a necessary problem: for his flock to live like kings, they need plenty of ordinary men around. They find them in the shape of scared minorities, and those forced to endlessly toil in Columbia’s factories. As Booker and Elizabeth delve deeper into Columbia this conflict escalates – via their own hand in some crucial places – until all-out war on the streets is unavoidable.

These are brave decisions for a big studio to make, and Irrational should be applauded for its efforts. It’s a shame then, that you never really feel that involved in the war itself. Your actual choices don’t seem to affect proceedings that much, and if the rebels’ victories turning them into the thing they despise makes a good point about shades of grey, it doesn’t do much for combat variety: your enemies now wear red instead of brown, and that’s about it.

If Columbia does one thing right, it’s making the player question the nature of the environment around them. It feels like The Truman Show crossed with The Twilight Zone – plastic smiles and saintly manners hide barbaric beliefs; barbershop quartets singing anachronistic pop hits disturb and entertain in equal measure; and secondary characters appear and disappear like Batman auditioning for a role in The Prestige (itself surely an influence). There’s an eerie, dream-like sense of disharmony to it.

At the same time, it’s quite a boring environment to fight through. The blue skies and bright colours have no doubt been chosen to contrast with the dank oppression of BioShock – a point that couldn’t be made more explicit in the game’s opening few minutes – but in doing so Irrational has forgotten what made Rapture so special. Andrew Ryan’s city under the sea felt complete, claustrophobic, inescapable; growing stranger as you progressed through it, the water, as it does, providing a constant pressure. Its inhabitants were both familiar yet disquietingly alien, like actual sealife found at the bottom of the ocean.

Columbia, on the other hand, is so bright and breezy that it feels like a shootout at Butlins. Even when things ‘go dark’ it never feels especially oppressive. There’s a worrying lack of urgency or danger to it all, compounded by the fact that the populace doesn’t seem to care much that a total stranger is wandering in and out of shops with an automatic weapon. At one stage I was in a giftshop wielding a machine gun, the barrel still red hot from killing more cops than Ice Cube on an especially bad day, and no-one much seemed to care. Good for adding to the dreamy haze, bad for tonal consistency.

There’s also a lack of diversity to the environments themselves. Besides a day-night transition and a late game tone shift, the environments you fight through at the start of the game feel very similar to the environments you fight through at the end. Fine, if said areas convey a sense of individual character or design, but for the most part it all feels the same. There’s nothing here to touch Fort Frolic or the sense in BioShock that you’re digging deeper into an actual place, and not just navigating a set. Instead, I felt like I was hopping around a series of near-identical platforms, going wide rather than deep, the game feeling very samey for it.

The combat itself also suffers from monotony via overuse. Essentially the same from the previous two games – even if you can now only carry two guns, annoyingly enough – Booker can wield vigors (plasmids) at the same time as his more conventional weapons. He also has a recharging shield. The vigours and weapons can be upgraded via vending machines, and there’s also upgrades in the form of wearable gear that gives you combat buffs.

As ever, the fighting is satisfying without being truly remarkable, but combining your supernatural powers with your more traditional ones does still entertain more than most shooters. Using the Return To Sender vigour to absorb incoming bullets like Neo is simply very cool; being able to throw them back even cooler (vigors have two or even three different fire modes). The new Sky-Line mechanic also plays a part, enabling players to change levels during combat, secure vantage points and literally get the drop on their foes.

When this all comes together, BioShock Infinite feels vital and addictive. The problem is that there is too much shooting. Infinite feels shamelessly padded, and if Irrational wanted to give players more content then all it has really done is expose how rudimentary its combat mechanics really can be. Elizabeth is never really a problem: enemies won’t target her, and she’ll also toss over health, salts to power your vigors, and ammo. Her portal-rending abilities also enable her to pull in weapons, cover, and hook points from other universes. Only one of these can be used at a time, lending a slight strategic edge to proceedings.

Sadly, as the hours wear on the combat becomes more and more grating, as there’s no real sense of escalation in either your abilities or your enemies. Fighting cops and guerrillas for the most part means fighting humans, reducing the combat to the same tactics over and over again. There are special enemies, but again, it doesn’t feel like you need to change your tactics that much: I got by using pretty much two of the eight vigors (Possession and Return To Sender). Even the special enemy types, while very cool in design, don’t add that much. As for bringing items in through tears: it feels gimmicky almost straight away. Surely, if Elizabeth can open up doorways to other worlds, we could have had some delicious set pieces: trucks bursting out onto enemies, planes crashing through. Instead we get the same combination of sniper rifle/ a bit of cover/skyhook/robot auto turret, like the only place Liz can look into is an under-construction Skynet HQ. Infuriatingly, you’re locked into most encounters via sealed doors that only Elizabeth can open. Kill rooms, essentially, and far too many of them at that. There is an attempt to shake things up with a boss fight against Psycho Mantis about two thirds through, but this is easily one of the worst things about the game.

There’s also a lack of a true antagonist. Comstock might get on the mic to chew you out occasionally, but you’re pretty much constantly slaying grunts. Songbird is severely underused, only popping up in a few instances. What could have been a running battle ends up being a few cutscenes (until the end). Irrational had an infinite set of variables it could have used for Songbird (via the tears): what it went for is deeply disappointing.

And yet, despite all this BioShock Infinite might just be one of the most compelling games of this generation. For all its flaws, it has an odd power, an insistence that players find out how the story concludes, and even then the voxophones dotted around are worth going back for (Preston, Comstock’s ally, in particular). A sense of dread and unease that will linger unless solved, especially where the Lutece family and their sheer oddity is concerned. Elizabeth’s strength drives the story, and her insistent search for the truth nicely counterparts Booker’s shady past. She may cower in combat – and her attire is utterly ridiculous – but she is far stronger than Booker in the areas that really matter, and seeing her power grow exponentially, her thinking evolve, had me locked in until the bitter end. The finale is sure to be debated for years to come – in both positive and negative senses, but the end of the game is merely the beginning of a cycle: I wanted to play it all over again, despite its flaws. If that’s not a recommendation I don’t know what is.

Completed the campaign on normal difficulty in 15 hours.

Despite its many flaws, BioShock Infinite might just be one of the most compelling games of this generation
8 Story is compelling Looks wonderful Combat becomes tiresome Tear mechanic underused