Marvel’s Guardians of the Galaxy review 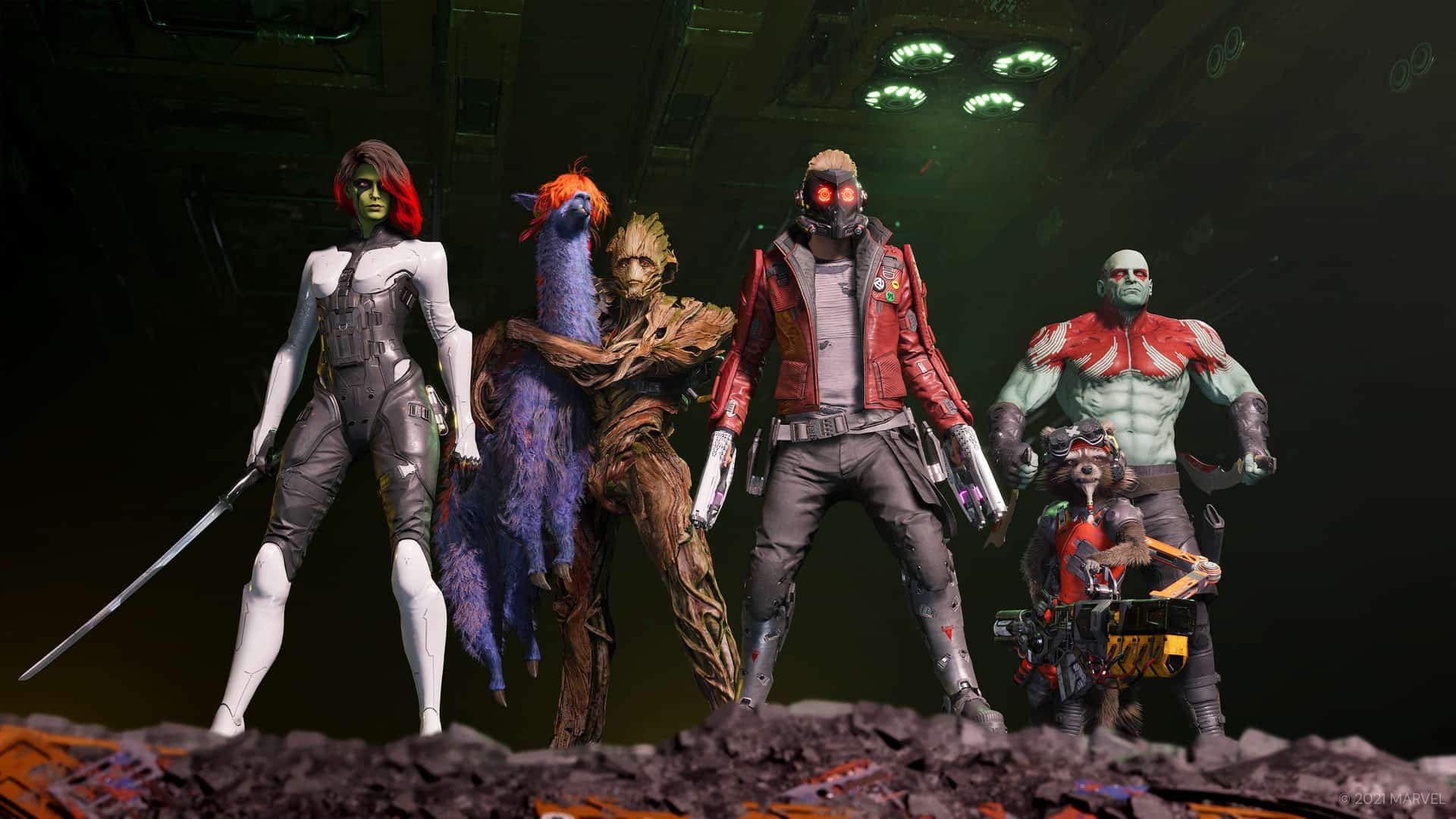 The plot of Marvel’s Guardians of the Galaxy, I’m pleased to say, is driven by money. Our heroes don’t have enough of it, and, when they are issued a fine by the Nova Corps—a sort of local council for the cosmos—they must rustle some up, fast. As a rule, narratives that are nagged along by financial troubles are to be celebrated; there are few other story-starters as universal and, thus, as effective at guaranteeing a high interest rate. The problem, as pointed out by Gamora—a woman as ebullient and, indeed, as green as the Grinch—is that, while their services are for hire, “no one will hire us.”

To be fair, you can’t exactly blame anybody for taking one look at these guys and backing out. They are led by Peter Quill, a man who, true to his name, possesses a blonde quiff on which you could impale yourself. There is Groot, whose grasp of language is modest but who, as a sentient tree, shades a number of scenes with surprising emotional depth. Drax, all blades and biceps, who is unable to register even the most seismic sarcasm. And Rocket, a talking raccoon with an advanced brain, capable of chewing through the tangles of any tech-based problem. As underdogs go, they are practically subterranean. Still, they mark an improvement on the squad at the centre of Marvel’s Avengers, the problem with that game being that the centre cannot hold; its stars keep breaking off and brawling through their own solo segments. At least the Guardians, however much they may bicker, like to battle as one.

Trying to scrape together some credits, Quill and his companions fall afoul of a woman named—honest to God—Lady Hellbender. She wields an enormous hammer and presides over what looks like a prog-rock album cover designed by Roger Dean. (Floating fortress? Check. Landscape of migraine-stoking yellow? Check.) Their attempts to flee her ire take them into uncharted territory. Or, to be precise, into Uncharted territory, which is to say that not only are we faced with an array of exotic locations, and a storyline that gives off the distinct whiff of wild goose; but that Quill is more than happy to dart across a crumbling structure, to squeeze through narrow apertures of rock, and to get caught in the crosstalk of his allies. (Periodically, you get a selection of responses; though, I have to say, so constant is the team’s rat-a-tat squabbling that I frequently tuned them out and chose at random.) 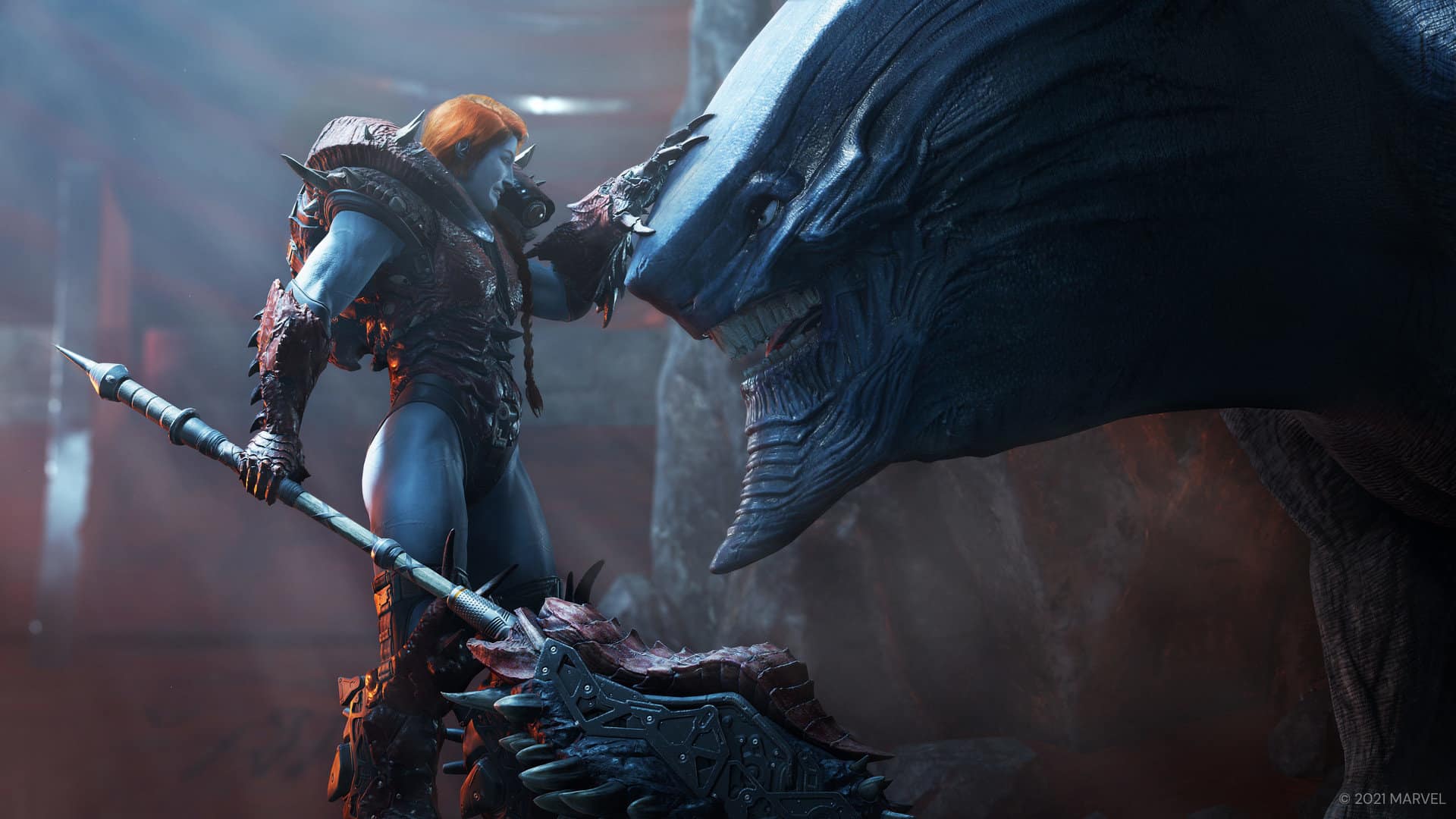 Unlike Nathan Drake, who, when it comes to firefights, prefers the stately stop-and-pop of cover shooting (customarily, in an ancient ruin that he can ruin) Peter Quill, whom we play as here, opts for the Iron Man approach. His boots are equipped with blue-flaring nozzles, and he zips around—through the air, in short spurts, and along the floor, like the hero of Vanquish. Meanwhile, he wields a pair of pistols that resemble the plasma rifles from Halo (two hair dryers, glued at the handles), and the combat consists of blasting both at and around your foes. Your allies can also be ordered into the fray, and, provided you are dexterous of mind and thumb, can unleash an assortment of powerful moves, mapped to the directional buttons.

The developer of Marvel’s Guardians of the Galaxy is Eidos-Montréal, which means that there are two ways of looking at it. The first is that the studio behind Deus Ex: Human Revolution and its sequel, Deus Ex: Mankind Divided—stealthy sci-fi thrillers, which hum with a subcutaneous layer of complexity—is now sadly being put to work, thanks to publisher Square Enix, in the Marvel machine. (The same fate befell Crystal Dynamics, who abstained from developing the third of the recent Tomb Raider games—leaving it to Eidos-Montréal, in fact—to make Marvel’s Avengers.) The second is that, if we’re going to get another super-freakorama, we should be thankful that such a talented team is behind it, that it is a single-player, linear game of around ten hours or so, and that it treats the usual Marvel subject matter—the end of the universe, or something—with a welcome dash of insouciance.

The tone of many of the Marvel films starts out light and bright, buoyed by wisecracks, but ends up hard and heavy with world-threatening gloom, like a balloon slowly filling with concrete. Marvel’s Guardians of the Galaxy does contain some peril, in the form of Grand Unifier Raker, a pompous and priestly sort, whose body is encrusted with gold crenellations. But, then again, we also have Cosmo, a Soviet Labrador retriever in a fetching spacesuit, who speaks into people’s minds. We get a subplot about a girl who may or may not be Peter Quill’s child, and a series of playable flashbacks to his youth, in which he sports a mullet only slightly more questionable than his present-day coiffure. 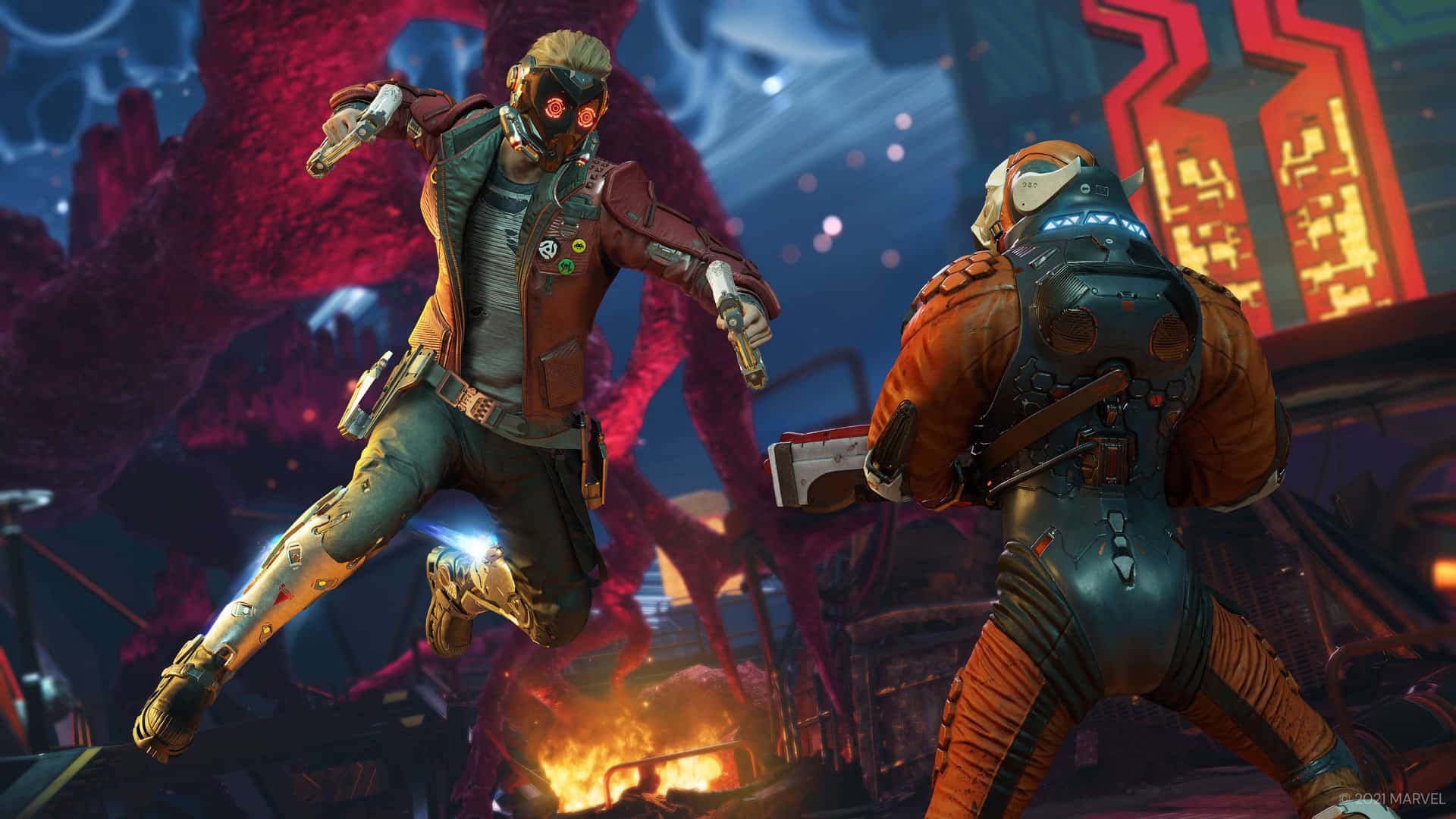 Above all, we get a string of arenas through which to shoot and pummel, and some light environmental puzzling, wherein you direct your fellow-Guardians to hack doors, shimmy up walls, or bridge gaps with an unfurling floor of roots. Where Marvel’s Guardians of the Galaxy proves most winsome, however, is in its twining of the intergalactic and the terrestrial. This is touched off early on, as the young Peter reads a fictional issue of Rolling Stone, which contains a review of the new album from his favourite band, Star-Lord (from whence he plucks his superheroic alias). “For this band, sci-fi is the rocket fuel that makes their album rock even harder,” it reads. For Eidos-Montréal, it’s the other way around. The procession of licensed songs on the soundtrack—frothing with the likes of Hot Chocolate, Blondie, Billy Idol, Wang Chung, and Tears for Fears—tune the reaches of space to a comic, earthly chord.

Hence the debris field, near the beginning, bound up in pink goo, as if someone had tried to stick a shattered starship back together with bubblegum. Our escape from it, piloting the team’s craft, as though we had slipped into a brief burst of Star Fox, is backed by “I Ran (So Far Away),” by A Flock of Seagulls. Hence, too, Quill’s guns, which not only look like children’s toys—wrought from chunky, pale-grey plastic—but were actually given to the young Peter as a birthday present (left behind by his absent, starfaring father, so we are told). Could Peter merely have retreated into his Walkman and dreamt up the adventures to come, drawing inspiration from the posters and vinyls that furnish his den? In any event, I shall leave final word on Marvel’s Guardians of the Galaxy up to Rolling Stone. “If you’re looking to fulfill your recommended daily allowance of guitar-crunching, fist-pumping rock ’n’ roll,” it begins, “Star-Lord has you covered.” The verdict? “Low nutritional value but plenty of sugar rush.”

Where Marvel’s Guardians of the Galaxy proves most winsome, however, is in its twining of the intergalactic and the terrestrial.
7 Tone Soundtrack Low nutritional value