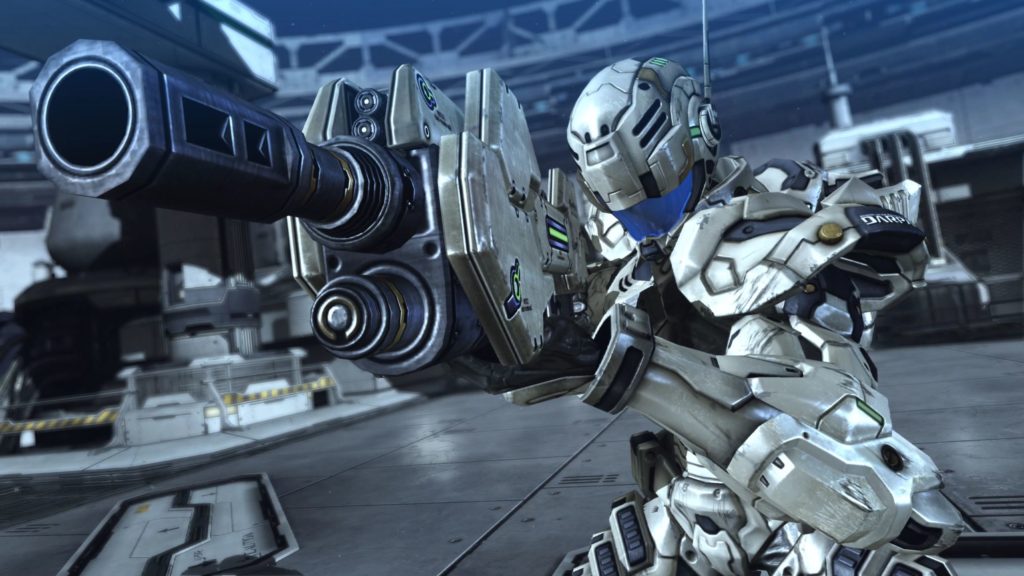 Vanquish is Shinji Mikami at his most liberating

If you have ever doubted the game-sinking power of the critics—an entirely reasonable position—look no further than Vanquish. I can’t think of another game that was deported to the purgatory of the half-forgotten so swiftly by the efforts of professional appreciators. This wasn’t a coordinated attack—some band of embittered hacks stropping their hatchets for a bloodthirsty takedown. No, it was much worse than that: they liked it. When it first released, in October 2010, the language apt to describe it just happened to be composed of the sort of clichés that drum one’s head into hollow submission. Its violence is Visceral. Its movement is Balletic. Its arenas are Immersive. And, considering its hero sucks jadedly on a cigarette, it is certainly Gritty.

The use of such worn-out words happens to be entirely justified, in the case of Vanquish. But what hope did it have of standing out, when all anyone had heard of it was what they had heard a hundred times? To be fair, the game doesn’t dress to impress, either: its rich array of greys and browns gives off the impression that it was wrought from the metal entrails of every other military-industrial shooter of the period. Ten years on, thanks to a double pack that binds it with Bayonetta—a game that stood no chance of slipping by unnoticed, given that its heroine happened to be a witch clothed in coils of her own hair—Vanquish is back. It’s an ingenious tactic: hitching a ride on the broom of a celebrated classic with a view to sweeping new fans under your spell. For those freshly reeling from the triumphant wreckage of Bayonetta, what does Vanquish have to offer? In a word: refreshment. To describe it as a third-person cover shooter is like saying that a Ferrari Enzo can reliably get you from A to B; it isn’t wrong, per se, but it rather underpowers the point. The firefights—and rare are the moments without either fire or fight—are completely free of the lumpish pace you expect from ordinary cover shooters, stuffed as they are with all that calculated cowering. Instead, it transforms the subgenre’s waist-high walls into vaulting boxes; far more useful than the cover itself is the air above it, through which you swim in slow motion, picking off your foes before they have any hope of firing back. Then there is the knee-slide—think Freddie Mercury at Wembley Stadium and add rocket-fuel—which whisks you between encounters. Your evasive dodge, meanwhile, resembles someone performing a pirouette while strapped into an aerotrim.

Indeed, much of Vanquish seems more attuned to dance than to fighting; each of your moves is carried out with the kind of pose that usually precedes a flurry of judges’ scorecards. (Note the animation that’s unleashed when you throw a grenade long-distance: a leaping, heel-kicking lob, like a handball player striking home.) When you see the hero, Sam Gideon, encased in his “Augmented Reaction Suit” and deployed to repel a Russian invasion of the United States, you feel you could just as easily be watching Darcey Bussell—she of irrepressible plié—trussed up in high-tech silver and sent to battle her opposite number in the Bolshoi Ballet. It’s the armour-plated lock-step between style and mechanics that keeps the game from staling into pantomime, its determination to change things up, to consider at all times how our reactions might be augmented. 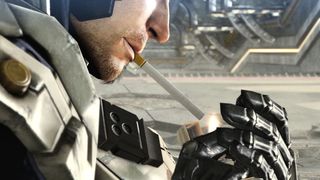 All of which is another way of saying: Vanquish is directed by Shinji Mikami. It should come as no surprise; Mikami’s career has been defined by an unflagging devotion—or, if you’re feeling less charitable, a fevered addiction—to style. But even his stingiest detractors would have a difficult case arguing that Mikami hasn’t also contributed his fair share of substance. It is thanks to him, after all, and to Resident Evil 4 in particular, that the third-person shooter went the way it did—that the camera sidled closer to its subjects and peered forwards, like a devil on the shoulder, whenever guns were drawn. The games that followed it found their own twists on the formula. Dead Space sealed its horrors in the sparkling vacuum of science fiction. Spec Ops: The Line, in paying homage to Apocalypse Now, piled on the darkness but left out the heart. And Uncharted did away with gloom completely, ordering in a balmy Hollywood breeze to waft through its shadows.

Mikami, however, would only dream of revivifying a rutted genre with play, and the moment you start Vanquish you sense that he is saying, “Look, I know I got us here, but all this cover-shooting is a drag, let’s dance instead!” Hence the winning zest at the heart of the game—the rush of pelting through its world as if across a non-stick pan—is that of frustration dissolving into freedom. For those impaled on Bayonetta’s charms—which, whacky as they may be, are a logical extension of the lunacy of Devil May Cry (both were directed by Hideki Kamiya)—the thrills of Vanquish will take on the hint of a fusion: as though a drably dressed third-person shooter had been livened up by its vivacious stablemate. Which isn’t to say that its joys are solely routed in the mechanical. 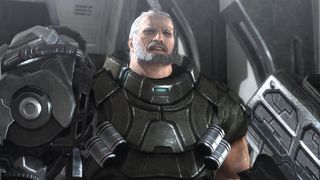 Not least of its offerings is the chance to breathe the atmosphere of rarefied rubbish that Mikami is adept at cultivating. Keep an ear out especially for the names. There is Professor Francois Candide, who created Sam’s armour and who is presumably named for the novel Candide, by Voltaire (first name François-Marie), whose titular hero is stripped of his own armour—that of privilege—and witnesses the horrors of an unreasonable age. There is Victor Zaitsev, the game’s villain, a spin on Vasily Zaitsev, the Soviet Sniper who fought in WWII and was given the title of Hero of the Soviet Union, and the even loftier honour of being portrayed by Jude Law, in Enemy at the Gates. And, best of all, there is Robert Burns, your commanding officer, who looks like a wider and more wizened Marcus Fenix; his inclusion seems a rebuke to the poetic, and when his namesake, the 18th-century Scottish poet, wrote that “nae man can tether time or tide,” he obviously wasn’t aware of Sam Gideon. It’s a common condition, sadly, and one that this re-release will hopefully put right. 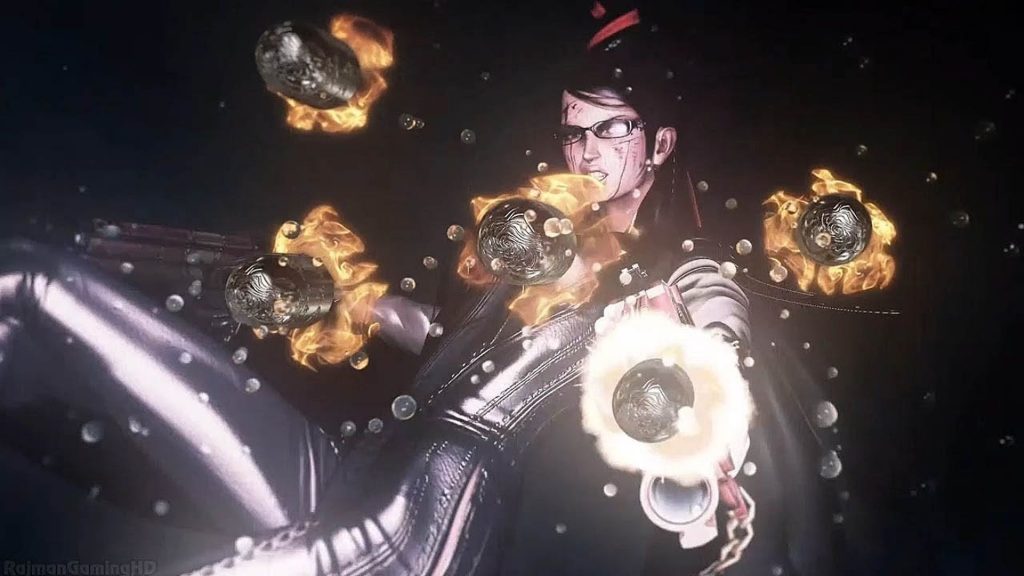 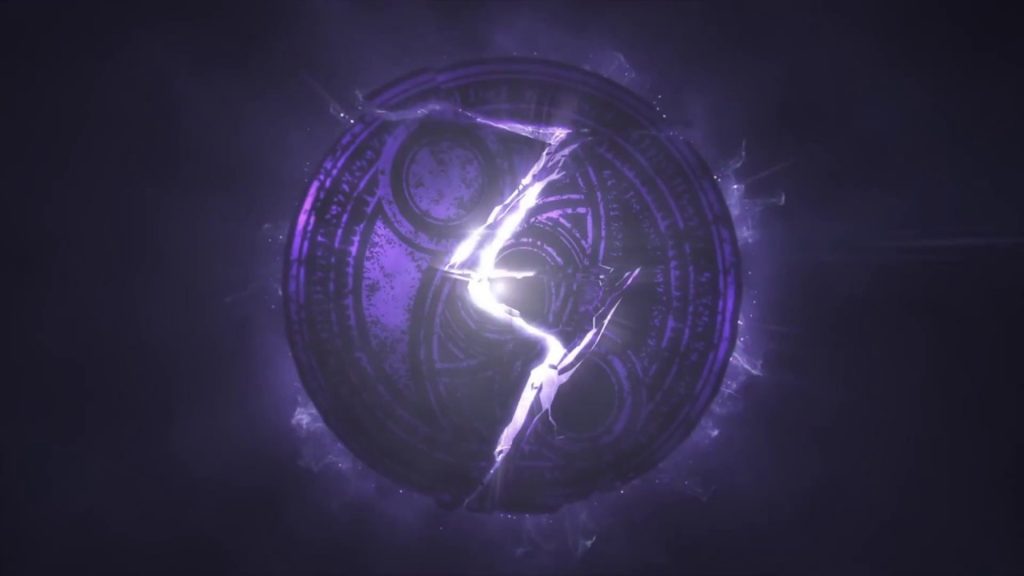 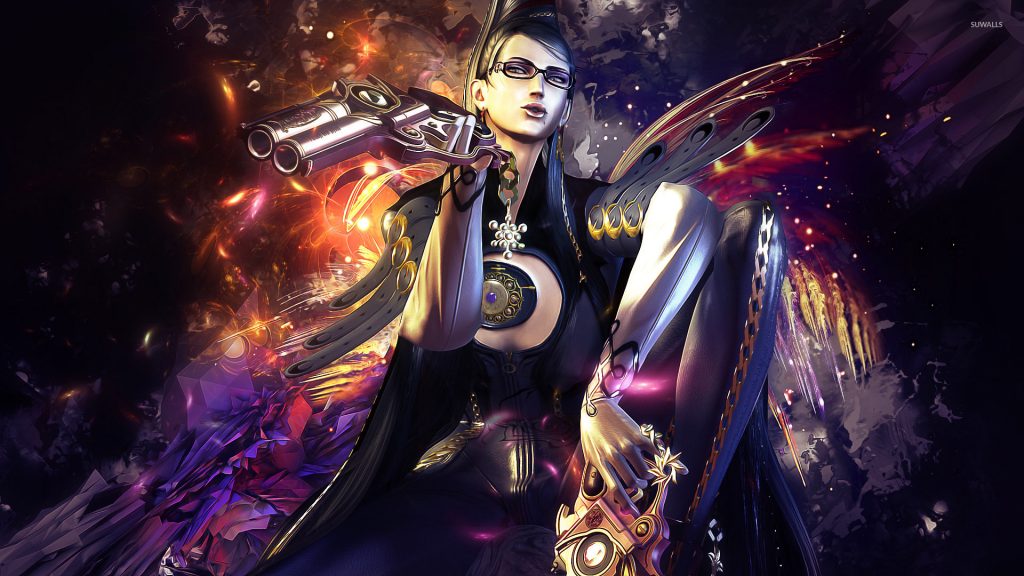 Platinum Games would like to self-publish Bayonetta games, if possible