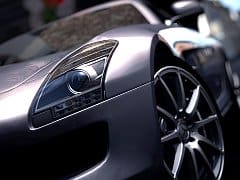 The actual driving in Gran Turismo 5 is brilliant. If driving cars is all you care about, Sony and Polyphony Digital have you covered. These days, I want more. I want a streamlined career mode, an exhaustive set of online features, cutting-edge visuals, and above all else, a spark – the something that turns a game from good to really special. Despite improvements across the board, Gran Turismo 5 still feels like an iteration of the game we were playing on our PlayStations in the mid ’90s.

Gran Turismo has always been about near-MMO levels of grinding, and GT5 is no different. To begin with you buy a cheap and nasty car, equivalent to what a 16-year-old might pick up with the money scraped together from five years of doing a paper round. It’s the kind of car small enough to fit sideways in a parking bay, and has an engine sound weaker than the Crazy Frog’s drivel. But entering some beginner events inside the A-spec menu is just something you have to put up with.

Events in GT5 have numerous restrictions in place, so you can’t pick and choose whatever you like. You have to make sure your driver is of a high enough level to enter (performance in events earns experience points), but then you also need to own a car that meets the entry criteria: such as a certain model or car type, a nationality of manufacturer, a vehicle developed within a certain era, or a motor with horsepower under the specified level. GT has always worked like this, but it makes for a lot of messing about in the unintuitive menus.

Instead of suggesting a list of cars that would fulfil the entry criteria, you’re left to go off and find suitable vehicles yourself – and there’s no quick way to get from the event screen to the showroom. It’s a complete chore if you just want to get on with the racing, and a far cry from Forza 3 – a game which made every effort to remove the tedium from acquiring new cars.

At the risk of enraging GT’s hardcore followers, Microsoft’s driving simulator featured a career that didn’t constantly require you to fiddle around in menus, hopping between cars and generally struggling to earn enough credits to buy the next required ride. In the initial few hours with GT5 it felt like I spent more time in the clumsy menus than actually on the track, which just isn’t right. I wouldn’t have minded if that time was being spent on tuning and buying upgrades (an area which thankfully is streamlined over GT4), but I was just stuck doing trivial stuff.

As you level up you’ll unlock new events, including the thing that quite possibly prevented GT5 from sending me to sleep in the opening hours: Special events. These challenges test your driving skills behind the wheel of karts, inside high-speed NASCAR race cars, on the Top Gear Test Track, around Nurburgring and in Rally cars. Not only are these great fun to take part in, often with different objectives to the standard events, but also earn you loads of credits and XP.

Special events work brilliantly, serving as a slight diversion from the grind of the core career while also delivering different driving experiences. Karting is edge of your seat stuff as you try to push as hard as possible without spinning out of control – which you’ll inevitably do time and time again. NASCAR, a motorsport that seems so dull on TV, is actually fun once you get the hang of the insane speed and reliance on drafting. But the real star is rally racing, which tests your driving skills like nothing else in the game. Finally, Top Gear’s Test Track also makes an appearance. This is no doubt a boon for Sony, but without a Reasonably Priced Car to drive around in, I can’t help but feel it’s a missed opportunity.

But the Special events don’t last forever, and soon enough you’ll be back into the daily grind of the A-spec mode. There’s a tonne to see and do, with the Extreme series requiring a driver rank of 20 before you can even see what awaits you inside the menu, but for many people it’ll be too much of a slog. While on the track GT5 is easier to get into, thanks to plenty of assists and cars that no longer feel quite so much like tanks trying to corner, the game built around the driving is bordering on being plain dull.

As I said at the start, Gran Turismo 5’s driving is top notch. I’ve got very little to say against the work Polyphony Digital has done in that regard. The racing isn’t as much fun as what you’ll find in games like Forza 3 and Need For Speed: Shift, though, mainly because the AI is still years behind the curve – but purists will appreciate the feel of the cars, the weight as you brake for corners and the fight for grip as you push that little bit too hard. But the handling is just one part of GT5. You’re generally in races of 12 cars, so AI does matter – and it’s sorely lacking here.

Part of the series’ appeal down the years has been the car collection aspect, and with over 1000 licensed motors in GT5, enthusiasts are in for a treat. Well, they would be if 800 of them weren’t slightly tweaked models from GT4 on the PS2. Sony hasn’t hidden this, but it’s worth pointing out that every car bought from the second-hand dealership is a low-poly, crudely-textured model. The difference between these and the proper GT5 cars is huge. You’re not allowed to take pictures of them up close, which tells its own story, and none of the GT4 hand-me-downs have an internal cock-pit view – which basically leaves you with the bumper camera, as the bonnet and chase viewpoints are useless.

Having such a massive roster of cars is great, but I’d have preferred the time been spent on making new models, even if the final number didn’t come close to the impressive 1000. It’s a shame I’m even talking about negatives with regard to models, as the premium cars look absolutely phenomenal – easily outclassing what we’ve seen in any other racer. But the graphical shortcomings don’t stop at the old vehicles; tracks suffer from the same “new and old” problem. While the gulf here isn’t as huge, the tracks that appeared in previous games look far rougher than you’ll expect. Cote d’Azur, the F1 Monaco circuit, stands out as looking particularly dated in comparison to the stunning Madrid and London courses.

It’s also somewhat disappointing to find a game that frequently struggles to maintain a smooth frame rate, suffers from a lot of pop-up, and has some ugly screen tearing. When GT5 is at its best – with premium cars screaming along in the rain at night, traffic lights gleaming into the cockpit – this really is the visual pinnacle of the racing genre this generation, but that isn’t reflective of the game as a whole. For a project that’s been in development for so long, it’s hard to understand how much of it feels rushed out the door.

And that’s also exactly how I’d describe the barebones online functionality. From the awkward-to-set-up online races for up to 16 players, the token gesture of a social network, to the complete lack of online leaderboards, GT5 online isn’t only weak in comparison to modern racers, but also compared to the likes of PGR2, which hit the original Xbox back in 2003.

It’s even harder to understand why such essential features are missing and the menus so clumsy when there’s a whole host of superfluous extra content. B-spec mode has you create a driver and then essentially serve as a helpful instructor to the AI drivers. I don’t find it even remotely fun, and I expect 90 per cent of the game’s audience won’t either. Licence tests are back, but they felt unnecessary and dated back when GT4 hit stores; they used to feel like a novelty, but not any more. And finally, the Course Maker feels like a good idea executed poorly. Instead of drawing out your own course designs, you simply tell the game how hard you want a certain section of track to be. The results are ok, but it’s nothing you’ll dabble with more than once.

If you’re a hardcore GT fan who enjoys nothing more than lapping endlessly in high-powered vehicles, or dabbling with a fine selection of classic cars, this game will cater to your needs – albeit without leaderboards; everyone else will find a game that’s often tedious to work through, and missing essential functionality. Judged purely on how good the driving is, GT5 is top class, perhaps even king – but as a game it could and should have been a whole lot better.

If you're a hardcore GT fan this game will cater to your needs; everyone else will find a game that's often tedious to work through, and missing essential functionality.
8 Looks stunning at times The driving is superb The racing isn't great Lacking essential features