*BREAKING* Overwatch 2 NOW LIVE – UK, US and other regions’ launch times for OW2 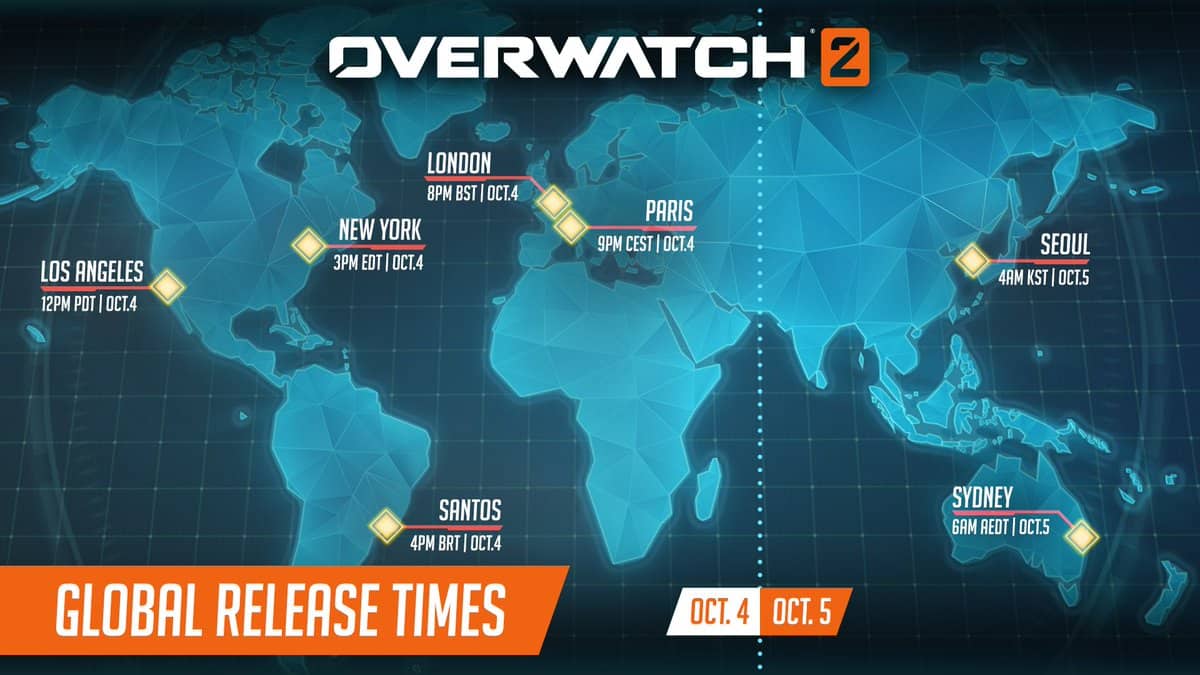 Overwatch 2 will release today (October 4th, 2022) – with servers expected to go live in just a few hours. Both PC and now console owners can preload the game if you have owned Overwatch or purchased the Watchpoint Pack.

UPDATE: From the time of writing this, Overwatch 2 is now LIVE. You should be able to launch into your game (with preferred platform) and find yourself on the main menu!

The game will slowly be rolling out per region, so expect a little bit of disruption!

NOW READ: Is Overwatch 2 Down For You? Here’s how you can find out!

The highly-anticipated sequel to 2016’s Overwatch, all eyes are now on the Overwatch 2 release time as fans prepare to get their hands on Blizzard’s PVP shooter. Overwatch servers have now shut down as the world prepares for the new game.

The sequel, which suffered multiple delays in the run up to its release will bring with it six new maps, three new heroes, 30 new skins (including 1 Mythic skin), rewards and, of course, a brand new battle pass system. A new game mode will also be arriving – called Push.

NOW READ: Everything you need to know about Overwatch 2

While many regions will see Overwatch 2 arrive today (October 4th), some regions such as Sydney and Seoul, will have to wait until October 5 until Overwatch 2 releases.

Overwatch 2 is a Battle.net exclusive for PC users and is not on Steam.

Below, we detail exactly when you can play the game – so make sure you have it pre-loaded to avoid any delays getting online. We’ve broken it down by different regions, so it’s super clear when you’ll be able to play Overwatch 2.

Blizzard has published a map detailing the approximate time Overwatch 2 will go live, depending on what part of America you live in.

Encouragingly, gamers across the States will be able to play the game together with one seamless launch planned.

The times for players to enjoy Overwatch 2 in America are as follows:

Here’s when Overwatch 2 will launch in the UK:

Here’s when Overwatch 2 fans will be able to play the game in France:

The game will launch at the following time in Santos:

The game will launch at the below time in Seoul:

Gamers in Sydney will be able to play Overwatch 2 from:

The game will launch at the below time in Toyko:

Overwatch 2 will be arriving on Nintendo Switch, PC, Xbox Series S / Xbox Series X and PlayStation 4 / PlayStation 5 consoles. Remember, the PVE mode is not going to be available on launch as it being developed by a different team. There is no firm release date on this yet, although it is expected at the beginning of 2023.

Right now, you can pre-load the game on PC if you want immediate access on launch. Make sure you have 50GB of space available.

In order to pre load the game, you need to have owned Overwatch or have bought the Watchpoint Pack. Console players can pre-load Overwatch 2 right now which seems to be live right now!

Inside of the Watchpoint Pack is bonus skins (including 7 Legendary and 5 Epic), a Premium battle pass, Overwatch Coins, a new hero, and access to the original Overwatch: Legendary Edition.

Crossplay and cross -progression is supported, while Overwatch account merging will ensure anything you unlocked in the original game – be that epic skins, mythic skins, rank, souvenirs and other additional cosmetic rewards – join you in the sequel, so will not need to be unlocked again.

Thousands of gamers are desperate to get hands on with Blizzard’s latest hero shooter after the latest beta closed in late July.

Many will be setting their sights on new character the Junker Queen again, after she was far and away the standout performer in the recent Overwatch 2 beta.

She was so powerful, in fact, that Blizzard commented they had ‘likely overdone it a little bit with Queen’ – so expect some changes come launch. Sojourn was another favourite from the beta, boasting a win rate of just under 50 per cent.

Overwatch 2 Kiriko skin – how to get it

To celebrate the launch of Overwatch 2, you can grab a Kiriko skin, via two Twitch drops.

You can find more information on how to grab Kiriko, one of the game’s many legendary skins, a Razor Sharp spray for Kiriko, and a Donut Weapon Charm on the official Blizzard website.

As part of this, there is now an initiative called SMS Protect. Overwatch 2 now requires a phone number in order to launch the game. A phone number can only be attached to one Battle.net Account.

To add your phone number, simply:

You can also set up notifications via Battle.net to:

Elsewhere, Blizzard will use machine learning to monitor and protect the game from cheaters. “Our detection methods leverage multiple systems, including your in-game reports, to identify behavior that drives down the quality of the in-game experience. We’re expanding our detection capabilities by introducing audio transcriptions in the following weeks after launch,” they write on their website.

Cross play and cross-progression has been on everyones mind when it comes to Overwatch 2 and there is great news around this matter.

Finally, with the launch of cross progression, you can now merge multiple Overwatch accounts to carry progression and in-game cosmetics into Overwatch 2 on a single profile. If you’ve only made progress in Overwatch on a single platform, then you won’t need to do this.

What happened during the Overwatch 1 launch?

When the original game was released in 2016, Blizzard let retailers sell physical copies of the game a day before launch. This was so it gave them time to prepare the servers ahead of the full launch.

This time around, as the game is digital only – and free – there is no such strategy.

Yes! The game is out on October 4 in North America and Europe. Gamers in Eastern Asia and Oceania can play from October 5.

Will Overwatch 2 be free?

Overwatch 2 will be free-to-play, however, there will be some paid-for elements. For example, gamers will be able to purchase a battle pass – in both standard and premium form. The original Overwatch, which launched in 2016, was originally a paid-for game, before going free-to-play.

Will Overwatch 1 shut down?

Yes, Overwatch 1 will shut down and will be replaced with the new version of the game, Overwatch 2, on October 4.

If you have not played Overwatch or have not bought the Watchpoint Pack, you can’t download the game before the global launch on October 4.