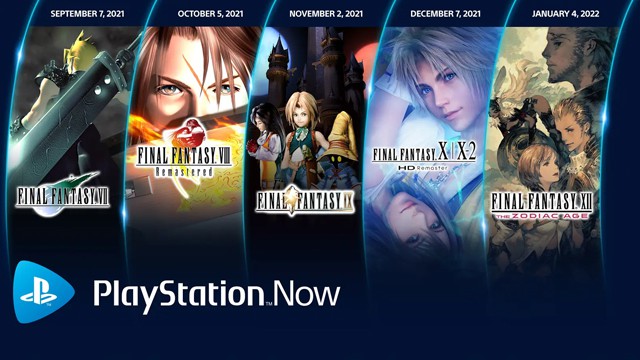 Updated on September 2, 2021 by Ben Borthwick

A whopping five Final Fantasy titles are coming to the PlayStation Now service between now and this January, PlayStation has announced.

One chapter of the classic RPG series will be added to the service each month. We start with the original version of Final Fantasy VII on September 7. Next up, October 5 will see the arrival of Squall’s adventure in Final Fantasy VIII. November 2 sees us pay Zidane, Garnet and Vivi and friends a visit for Final Fantasy IX. Then, the Final Fantasy X/X-X2 HD Remaster collection follows on December 7. Finally, we finish up with Final Fantasy XII The Zodiac Age which arrives on the service on January 4, 2022.

All five Final Fantasy games will be available to download or stream on their respective dates on PlayStation 5, PlayStation 4 and PC for subscribers to the service. You can read more about each entry, if you’re not already up to date, on the PlayStation Blog over here.

Set in the fantasy world of Spira, the game’s story centers around…

Set in the fantasy world of Spira, the game’s story centers around…