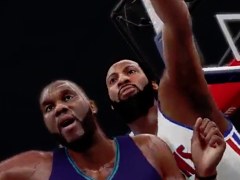 2K and Visual Concepts continues to go from strength to strength with its NBA offering. With a new in-depth career mode directed by Spike Lee, players will enjoy a story offering a tale unlike anything seen in a sports game before.

Once again players get to enjoy other modes such as MyGM and MyTeam too, as well as playing as teams from the Euroleague.

Gameplay has been given an update to include smoother animations and players now feel more grounded to the court, so you won’t feel as locked into animations and now more in control of your team. Collision physics have been improved too meaning contests for jump shots now become more intense, and rebound battles now have greater impetus.

Unfortunately, for anyone looking to jump into the NBA 2K series for the very first time, the game’s tutorials fail to deliver in bringing players up to speed with both the sport and the game, so VideoGamer has put together some beginner’s guides to help players find their feet and get to grips with the key mechanics in this year’s offering.