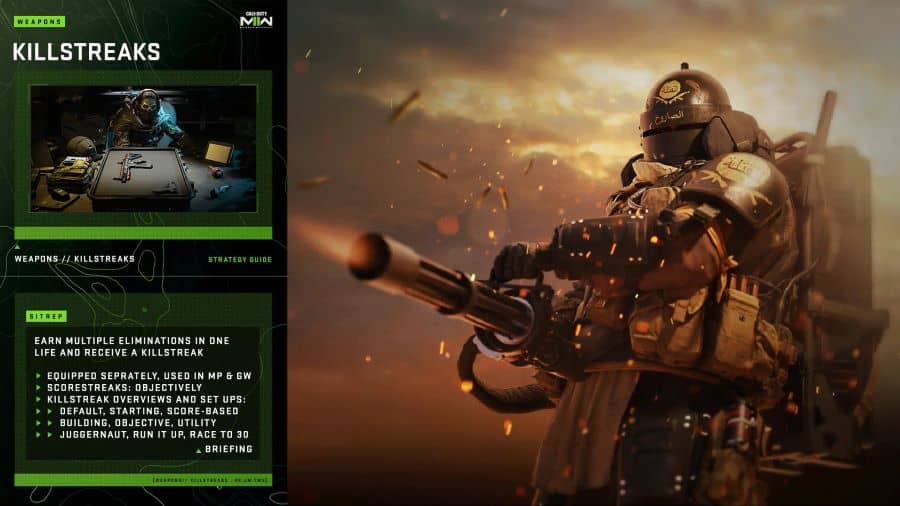 Call of Duty Modern Warfare 2 provides a huge number of ways for you to have an impact in each match, with customizable loadouts, weapons, and passive perk effects.

But if you want to go loud and have as much impact as possible in Modern Warfare 2, you’re definitely aiming for killstreaks (and want to arm yourself with the Kastov).

NOW READ: These are the MW2 Mastery Camos and this is how to get them

Killstreaks are a staple of Call of Duty, mid-match rewards that improve in efficacy and impact the higher your killstreak chain climbs. And Modern Warfare 2 has some of the most interesting and powerful Killstreaks in the series to date.

Here, we go through the very best ones on offer – to make sure you’re as deadly as possible when the Modern Warfare 2’s multiplayer kicks off on October 28. Let’s begin.

You can have three killstreak options equipped at once in Modern Warfare 2, allowing you a decent level range between the three.

We’re going to show you our choices for the best killstreak choice at every kill tier.

One of the most popular killstreaks throughout the entire Call of Duty series, the UAV returns as the lowest-level killstreak option.

But its relatively cheap unlock cost is exactly why it’s so useful. Being able to reveal enemy positions on the minimap is an incredibly useful scouting tool, and at just four kills, someone on your team is usually going to have access to one.

High-tier killstreaks tend to pack a huge amount of explosive power in Modern Warfare 2. At this lower end of things, it’s more about versatility and small tactical advantages rather than overwhelming bombardments. That’s why the Care Package will never go out of style.

While you’re relying on the luck of the draw to provide something useful, a well-timed care package will always be received warmly by your squad.

The Counter UAV is also useful for obscuring your team’s positions, but the increased cost compared to a standard UAV knocks it out of the running.

Now we’re getting to the big guns. Every option at the six-kill tier is some form of explosive ordinance.

And while it might take longer to unlock than the other killstreaks of its level, the precision airstrike can have a devastating effect when called down.

The Mortar Strike is also seriously in contention, able to take out multiple targets in a broad area.

But the Precision Airstrike tends to have higher margins of success, and at 6 kills that swings things in its favor.

While not as initially impactful as other explosive options, the Sentry Gun can be used as an excellent area denial tool, providing additional firepower, guarding chokepoints, and often catching enemies off guard when placed in a tricky or obscured position.

The S.A.E offers power and incredible precision, but the six-kill tier also provided a trio of excellent bombardment options for slightly cheaper.

The sentry gun does things differently, and it’s that versatility that earns it the top spot.

The VTOL Jet works as a combination of previous, effective killstreaks. Its firepower is lesser than something like the S.A.E, but its precision strikes are still lethal and hard to avoid.

And once those strikes have hit, the VTOL Jet is just as efficient an area denial tool as the sentry turret.

With multiple applications, this is an exceptionally worthwhile killstreak to unlock.

While previous killstreak air support has been impactful, at the end of the day, you’re still relying on AI targeting to wipe out your opponents.

The Chopper Gunner lets you take charge directly, unleash havoc with missiles and a rapid-fire turret. And if you’re on a killstreak of ten, you’re likely to be more lethal than any automatic targeting could hope to be.

The deadliest air support offered in Modern Warfare 2. If you managed to climb up to twelve kills, a Gunship is going to absolutely devastate the opposition. There’s nothing else like it in terms of aggression and precision.

The Advance UAV is also a potent option if you prefer to do the work yourself than leave it to support vehicles.

The opposing team will be marked and vulnerable for this killstreak’s duration, allowing you to track and pick them off with ease.

The Juggernaut assault gear is as much bragging rights as it is a tactical advantage, and it offers both in droves. This heavily armed colossus can shred opposing squads. And even when the Juggernaut is eventually dispatched, its minigun is still able to be used, providing a significant and long-lasting advantage for your squad.

How To Use Killstreaks MW2

To use killstreaks you must build up a number of kills – or points – without dying yourself.

No. Kills that are earned by your killstreaks do not count towards active killstreak progress in MW2.