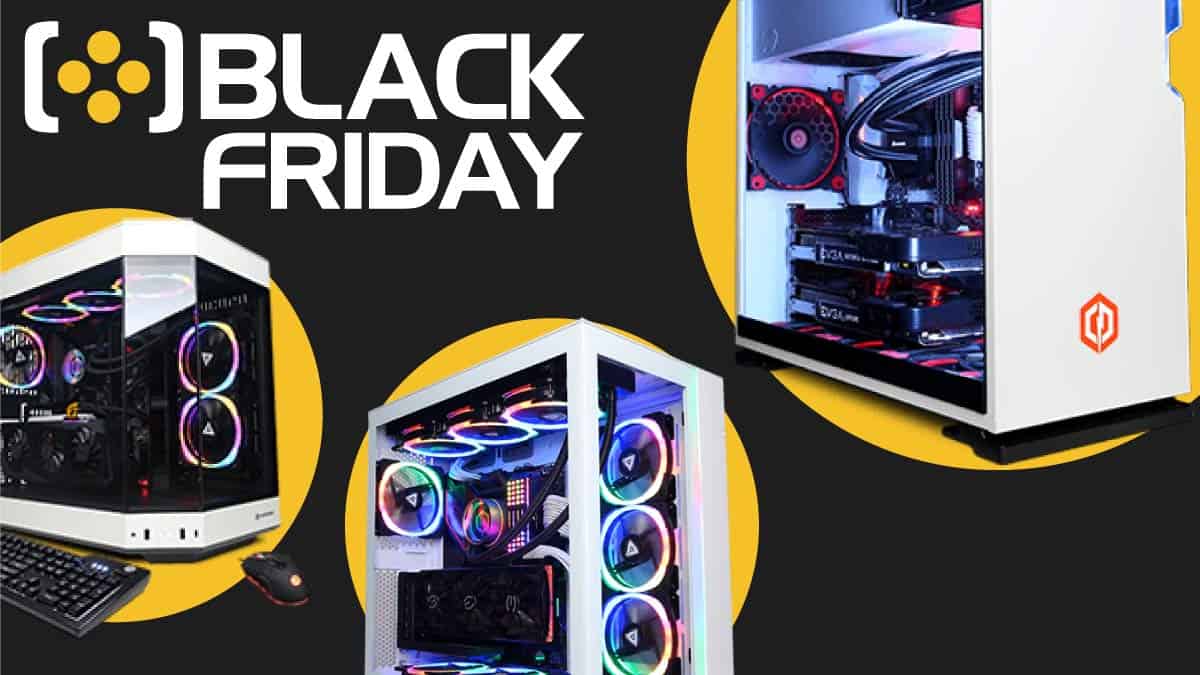 Updated on November 7, 2022 by Amaar Chowdhury

If you’re looking for the best Black Friday Cyberpower PC deals, then you’ve come to the right place.

Cyberpower offer a great selection of PC’s for a range of purposes, and this Black Friday is going to be a great time for you to snag a great deal.

This fall there’s a great selection of games coming out, and Black Friday is the perfect opportunity for you to grow your gaming setup. With AMD Zen 4 CPUs released in late September, Cyberpower are likely to use these new components in any gaming PC pre-builds they release after this.

So, this Black Friday could see some incredible savings on new PCs with the latest hardware.

Ranging in price, components, use, and appearance, these Cyberpower PC deals do not lack in performance or quality. The higher end PC’s will be packed full of the latest components, whilst we also have included PC’s with a slightly lower price-point that still pack a performance punch.

Here you’ll find all the Black Friday Cyberpower PC deals we could find so far from the UK. If you don’t find a good enough deal, know that this section will be updated several times between now and Black Friday (November 25th) so there’s still plenty of time to snag the perfect deal.

We’ve also included some of Cyberpower’s best PCs which aren’t yet on offer, but hopefully will be soon.

Where to find the best Cyberpower PC Black Friday deals?

A good starting point to find the best Cyberpower PC Black Friday deals is on their website, which is sure to be rammed with savings and discounts at the end of November.

We at Videogamer have spent hours trawling through different retailers in order to find you the best deals, and our favourite places are listed below:

When will Cyberpower PC Black Friday deals start in 2022?

We know that Black Friday will kick off on 25th November this year, and Cyber Monday follows three days later. We anticipate an exciting build up to that weekend though, with Black Friday deals beginning to circulate now.

If you stay up to date with our deals page, we’ll be sure to update you with the latest deals as often as they surface.

How to get the best Black Friday Cyberpower PC deals in 2022?

If scouring the web for deals isn’t your thing, we can keep you informed. We’re going to collect the best deals on this page, so if you want your Black Friday to be smooth-sailing you should stay close.

If you’re desperate to start looking now, then we recommend browsing our recommended retailers listed above. Starting now and getting an idea of general price trends will mean you know when you see a good deal.

The cost is one of the most important factors in deciding on a Gaming PC. Though, be careful as a high price doesn’t often equate to quality, and vice versa.

We recommend these guides by WePC:

CPU – This component plays a role in the processing capabilities of your computer, and it’s really integral to performance. In our opinion, it has a shared importance with the GPU for gaming performance. Don’t cut corners with this.

GPU – Like the CPU, the GPU is crucial for gaming performance. It renders all visuals onto the screen, so is responsible for silky smooth 4K graphics you salivate over. Similar to the CPU, a quality GPU is worth the investment.

Motherboard – The motherboard acts as a hub connecting all of the processing components. Deciding for yourself on a quality motherboard can be difficult, especially considering their entirely ambiguous standards of quality. It’s important to choose a motherboard with the right form factor for your PC, the correct socket type (which essentially forces you to choose between Intel and AMD for the CPU), and the chipsets enabled by your motherboard.

Memory – Having enough quick RAM is crucial for reducing loading times and reducing the overall load on other components in your PC. You have various decisions when choosing RAM, such as speed, channel type, and capacity.

Storage – Generally, an SSD is preferred for gaming and loading your OS off. Though, there are several types of SSD. M.2, PCIe, and SATA.

PCIe and M.2 interface SSDs are generally preferred over SATA which is not industry standard anymore.

What is the best Cyberpower PC?

The Hyper Liquid 700 is armored with an Intel i9-12900KS and NVIDIA GeForce RTX 3090 Ti 24GB. With components that are at the absolute top of the range, you’ll be trying hard to eek out better performance on a gaming PC than this.

How do I know if a gaming PC is good?

A PC’s performance is determined by four major components:

Should I build my own gaming PC?

Building your own gaming PC is generally the most budget friendly method, and it is certainly preferred if you are technology confident. It is also an incredibly rewarding process.

We don’t recommend attempting to build a gaming PC if you haven’t spent a lot of time researching components, ensuring their compatibility with each other, and researching best practices.

Should I buy a pre-built gaming PC?

If you do not want to build one for any reason, buying a pre-built PC is certainly a valid option. It is quicker to buy a pre-build than to piece together your own, and there is little chance that something bad will happen to your machine.

If you do this, you may be limiting your choice of components and upgrade.