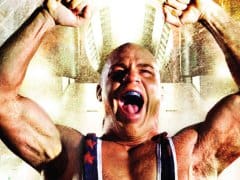 Midway is hoping that TNA Impact! will shake up the wrestling genre. For a long time THQ’s WWE series has stood relatively unchallenged, and it’s got to the point where the latest SmackDown Vs RAW titles feel quite dated. Fans have been crying out for a challenger, to give them something new and to make THQ and developer Yuke’s stand up and take notice. While TNA Impact! isn’t the wrestling tour de force we had hoped it would be, it’s a solid first entry in what will hopefully be a continually improving series.

What most fans want to know is how TNA Impact! plays and we’re glad to report that Midway has put together an extremely competent wrestling engine. It still feels very much like a wrestling game, so if you’ve disliked them in the past don’t assume you’re going to like TNA, but it does feel easier to get into than recent WWE titles. As well as your usual punch, kick and grab moves, which can be combined with running and jumping from the ropes, you have a simple to grasp reversal system, allowing you to turn the table on an opponent if you time your counter perfectly.

This isn’t quite as exploitable as it sounds, with certain moves having a smaller window of opportunity than others, but two skilful players can perform reversals one after another, making for some amazing moments. We did find that the AI wrestlers were able to perform reversals a little too often, so you’ll need to weaken them first by performing less extravagant moves – no high kicks from the top rope to begin with.

Each of the wrestlers fall into a certain class, with set moves only available to each. The high-flyers for example (AJ Styles being a perfect example) can perform the kind of acrobatic moves heavier guys can only dream of. Because of their versatility around the ring we prefer high-flyers to the other wrestler types, but you’ll encounter players who prefer the athletic and heavy wrestlers when you’re playing online, over Xbox LIVE or PSN.

Your wrestler’s health is displayed on an outline of your body in the corner of the screen, with green body parts being healthy, red is weak. If you’ve got too many red body parts you’re vulnerable to being pinned. A stun meter fills with red as you take blows from opponents, leaving your wrestler temporarily helpless once it’s full. This allows your opponents to perform more risky moves without the risk of you reversing. You also have an IMPACT meter, which fills as you repeatedly beat up your opponent. When full you’re able to perform a signature finisher from a standing grapple, effectively ending the game.

Another neat idea is how submissions work. When you initiate a submission hold the game presents a series of button presses to both you and your opponent. If you press them in order first as the aggressor you’ll damage your opponent and possibly get a tap-out victory; if you press the buttons first as the guy being held you’ll break out of the hold. Wrestling games have tended to leave players on the end of a beating feeling rather helpless, and Midway has done a good job of giving you ways out of most situations.

Where TNA falls down is in its feature set. THQ’s WWE games have been going for years and this has enabled them to cram their product full of game modes. In IMPACT! you get a decent story mode that traces the career of a down and out wrestler who comes back to ring after being on the wrong end of a beating, exhibition matches and online play, but that’s about it.

TNA Impact! includes nine match types, from the basic singles match, tag team and free for all, to submission, falls count anywhere (plus tag variation), and two-on-one handicap. The game mode that will be of interest to TNA fans is the Ultimate X, which sees players competing to get hold of a giant X hanging in the centre of the ring. There’s enough here to please fans, but there are no female wrestlers, the ‘create a wrestler’ feature is extremely limited and the roster is relatively small. We know this is Midway’s first TNA game, but it’s hard to ignore the fact that WWE gives you more for you money.

Something Midway almost completely nailed is the visuals. The TNA wrestlers look incredibly life-like, with the illusion only being broken when animations occasionally jerk into one another. Character models in wrestling games have always been good, but we reckon these are the best we’ve ever seen. It helps that many of the wrestlers had their moves motion captured instead of having a generic wrestler perform the moves for everyone. Things are let down somewhat by some graphical glitches (more evident in the PS3 game), with textures popping in and flickering in the arenas.

It was probably too much to expect TNA Impact! to be the best wrestling game of all time, but it does still feel a little lightweight when compared to THQ’s SmackDown Vs RAW series. In terms of gameplay Midway is off to a solid start, putting together a control system that’s both easy to grasp and hard to master. With more variety in the roster, an improved move set and more game modes future TNA games could take the wrestling belt, but for now it’ll have to make do with being a very worthy challenger.

With more variety in the roster, an improved move set and more game modes future TNA games could take the wrestling belt, but for now it'll have to make do with being a very worthy challenger.
7 Easy to pick up and play Stunning wrestler models Lack of game modes Needed more variety in moves