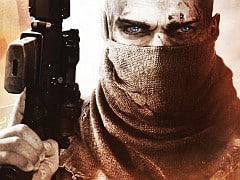 It’s pretty fitting that Spec Ops: The Line borrows both fonts and HUD decals from Gears of War. After a sexy menu that bleats out a whiny Hendrix-esque version of The Star Spangled Banner, the game’s first sequence is a turret section that looks, sounds and feels exactly like Epic’s chunky billion-dollar juggernaut.

This identity crisis continues throughout the whole of this seven-odd hour campaign. At times Spec Ops: The Line shows genuine promise, bravery almost, and yet it always falls back on some more me-too mechanics and homogeneous gameplay tropes. If this game was any less confident in who it was or what it was trying to be, well, it would be protagonist Captain Martin Walker, a man sent into disaster-stricken Dubai on a mission to rescue Colonel John Konrad and the rest of his 33rd Battalion. And he’s a man who soon loses his sense of what’s right, wrong, real and imagined.

It’s telling that I’ve had to look up Walker’s name about five times since starting Spec Ops. This crew-cutted, moderately handsome, Caucasian, Nolan North-voiced vessel is simultaneously completely unmemorable and the most important thing about the game. This is his story, one that’s at times brave, memorable and utterly shocking, but it’s also his video game, a fairly unremarkable Gears clone with a couple of nifty tricks up its sandy sleeves.

Taken out of context and separately from the story and setting, Spec Ops: The Line would actually be pretty tough to recommend at all. While the shooting, cover snapping and grenade tossing is perfectly functional, the poor enemy AI and reliance on heavy scripting leaves it lagging well behind Gears of War and Uncharted. That setting, though, is brilliant. Dubai has been destroyed by raging sand storms, and when Walker and his two banter buddies, Adams and Lugo, arrive, it has already begun to tear itself apart.

The 33rd Battalion has taken over the city, and is fighting a war with a civilian, CIA-led rebellion. More immediate, though, is the devastation itself. Giant hotels are caked in hundreds of feet of sand, which can be used in battle (shatter the right window at the right time and you’ll drown your foes in the stuff), and the weather can change in an instant (well, a scripted instant), creating some visually arresting shootouts where you’re battling orangey silhouettes in the swirling sand.

Just as Dubai is fractured and collapsing, so is Walker. Through a series of increasingly difficult and thoroughly unpleasant situations, his grip on reality and the battlefield loosens, turning Spec Ops: The Line into an almost surreal, hazy trip. There’s some seriously strong stuff in here, stuff that makes Modern Warfare 2’s nefarious No Russian look pretty tame. At times, Spec Ops is a dazzling ride.

There are moments, too, where the action does fly; violent shootouts that play out in breathtaking surroundings while classic 70’s hard rock crackles out of a distant PA system – when Spec Ops is on the money, it really kills it. A shame, then, that it suffers from the same narrative dissonance problems as North’s other famous role; Uncharted. The shootouts are frequent and long, and have you killing hundreds if not thousands of enemies by the game’s finale. Seeing a three-man squad take out an entire battalion is not exactly uncommon in video gaming, but when the story and setup are grounded in reality and carry such gravitas, having everything suddenly turn all Rambo 3 is distracting and actually a little boring.

The same criticism could be levelled at Gears, but that succeeds because the whole thing is preposterous – from the ludicrous physiques of your team to the relentless bombast of the story. Spec Ops is fractured and disconnected, and I don’t think that’s a deliberate reflection of your protagonist’s mental state. The main reason to push on, then, is that story. While the dialogue is way too F-bomb heavy and the banter is weak, there’s a real understanding of how setting and character work well to create video game narrative here. You’re always moving, always seeing somewhere new and often stunning, and the character arc makes sense. It may be a lift of Heart Of Darkness, but it’s one that’s done solidly and admirably. And as much as I hate saying it, that’s a pretty good achievement for a video game. Especially a shooter.

A shame, then, that Spec Ops: The Line never commits fully to its ideology, falling back on standard gameplay mechanics and protracted shootouts. It’s great that Yager has given us a story that’s worth talking about, that has a voice and a concept, but all of those things exist independently of how the thing plays as opposed to influencing it.

The opening levels are fun and exciting – controlling Walker and his two man team almost feels like iO’s forgotten classic Freedom Fighters – everything has a kind of bouncy weight to it, and the enemies stumble, spin and even somersault when you’re filling them with dusty lead. As the story progresses and intensifies, though, it feels increasingly divorced from the action. Where the game could take chances with how it plays (and it does in a couple of very small instances) it seems far keener on seeing how many turret sections can be forced into a level before your pad rumbles itself into a thousand pieces, interspersed with overly long shootouts against laboriously stupid enemies.

Weirdly, too, Spec Ops: The Line is best played on anything other than the standard difficulty. The easiest mode allows you to blast through the story and enjoy the game’s true strengths without frustration, while the ‘hard’ equivalent at least makes the combat stressful and tense. Unfortunately, that stress and tension soon gives way to apathy and remorse, as you’re grenade spammed into oblivion. Yager’s decision to not include any sort of ‘roll’ command is borderline criminal.

It’s a problem that leaks into the competent but forgettable multiplayer, too. Here, you get to enjoy the game’s perfunctory mechanics against others, but divorced of the gravity of the single-player’s story it’s difficult to recommend. Standard deathmatch and team deathmatch are joined by a mode that sees you taking out enemy structures to reveal a high value target. It’s good stuff, helped by the perk system that lets you buff nearby squad mates, but not something that’s going to have Battlefield, Call of Duty or indeed Gears quaking in their jackboots.

The same of which can be said for Spec Ops: The Line as a whole. There’s plenty to talk about and think about when you play through, copious imagery and allegory, from 9/11 to the current conflict in the Middle East, and there are glimpses of magic when the team takes chances with the gameplay and it pays off, but they’re all too fleeting.

Yager should be admired for its bravery and effort in building something different – this could so easily have been an entirely generic shooter – but it just doesn’t have the fundamentals to back up its grand ideas or the confidence to go completely off the wall and truly stand out from the crowd.

Yager should be admired for its bravery and effort in building something different, but Spec Ops just doesn't have the fundamentals to back up its grand ideas.
7 Interesting, often alarming story Arresting setting Poor AI Infinite turret sections