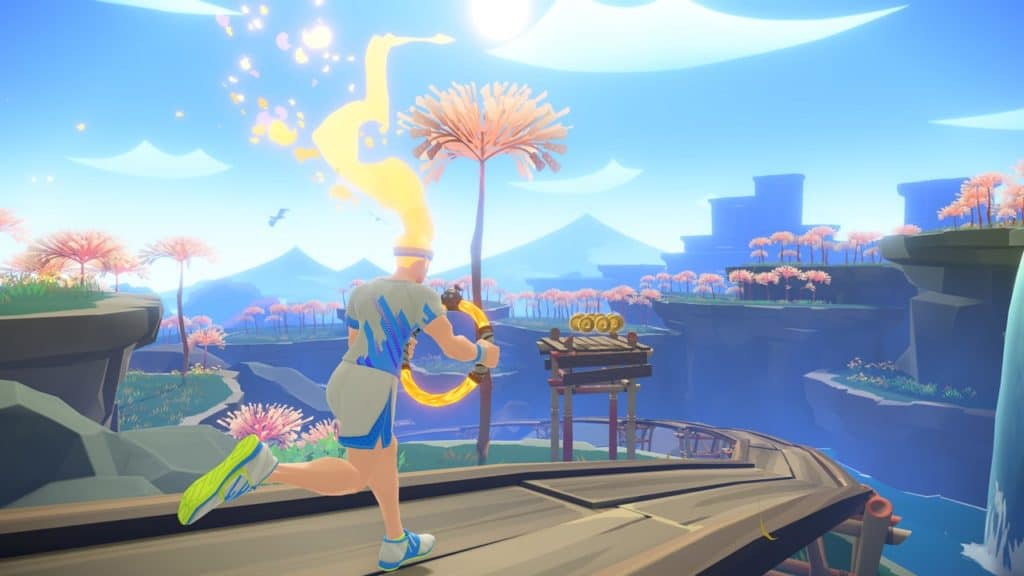 Remember that Wii Fit thing? Nintendo’s back at it again with Ring Fit Adventure, another fitness game that initially seems like a load of old gimmicky nonsense until you actually start playing it. Using a big flexible ring, called the Ring-Con, as its peripheral, you’d be forgiven for thinking Ring Fit Adventure is a bit silly, but the real surprise is that it actually works remarkably well, ensuring you quickly work up a sweat during its gleefully daft adventure and in various, separate exercises.

Starting each session with a quick stretch (after you’ve cleared the requisite room, of course), it’s easy to pick up and play Ring Fit Adventure, the bundled doodads including a strap to attach one Joy-Con to your left leg, while the other slots neatly into the top of the Ring-Con itself. You’re then presented with questions like height, weight, age and so on, before setting the tension of the Ring-Con by giving it a squeeze or a pull. Oo-er. Be warned: really giving it some will make things harder. Oo-er, again.

Ring Fit’s titular adventure then enables you to create a very basic character, then sends you off on an epic journey of cardio, stretching, and general ring-based strength and stamina exercises. If you’re struggling, you can adjust how demanding it is to press or pull the ring, and the game is carefully built around your fitness level and capabilities. The Adventure mode in Ring Fit follows a narrative involving your circular genie pal Ring, as you work up your fitness for showdowns with jacked dragon villain, Dragaux. The story’s not exactly complicated, but then, it doesn’t need to be. 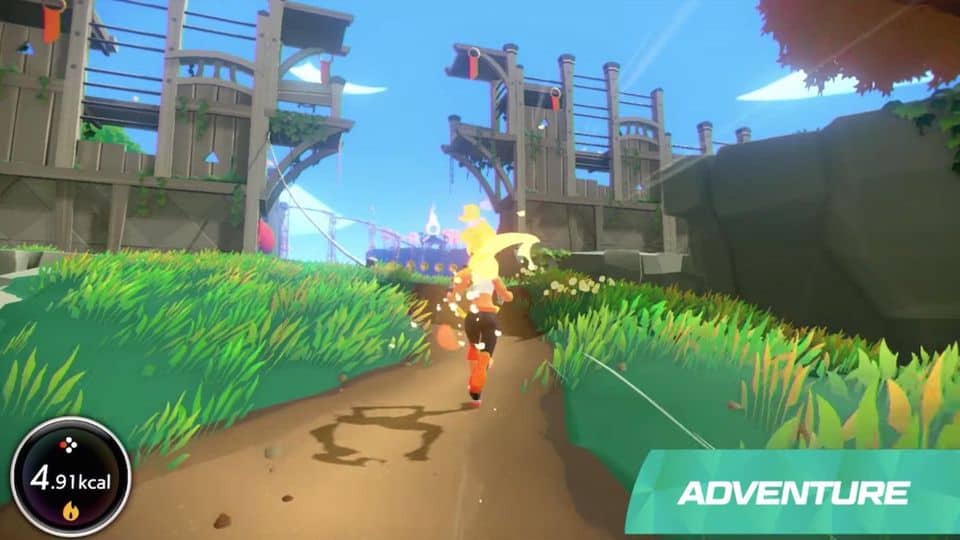 There are RPG elements like EXP, gained for defeating enemies, collecting coins, and overcoming obstacles like waist-high water or stairs. Traversing levels along a set path involves jogging, the higher the pace, the faster you’ll move. As you leg it through each stage, you can aim the Ring-Con down and pull outwards to jump, press in to fire an air blast or point it forwards and pull out to hoover up collectibles. It succeeds in being pretty engaging, as you attempt to beat a level in as fast a time possible, and tackle enemies using the power of exercise. Yes, really. You can dress up your hero, unlock new exercises to unleash as attacks, and unlock smoothie or soup recipes too – it’s quite comprehensive, although you can’t help but wonder why Nintendo didn’t stick a few guests stars into the game.

Levelling up increases your attack power and defence, but as you progress, enemy encounters become more frequent and put you against greater numbers, so you’ll consistently be getting a decent workout. As far as the game-ification of exercise goes, the Adventure part of Ring Fit Adventure does a very good job. It’s a bold, colourful and appealing game that certainly feels at home on the Switch, its mini-games especially loaded with competitive potential – short bursts of enjoyable sweatiness punctuated by a score and a grade. Apply yourself and you could even earn an ‘S’ rank, which presumably stands for ‘sweaty’.

Mini-games range from using the ring to smash robots like a mechanical whack-a-mole, gently descending through hoops using the peripheral as a parachute, blasting stacks of crates as fast as you can using the air blast skill from Adventure mode, or swatting away rows of marauding machines using a pair of baseball bats – controlled by pushing the ring into your rippling abs. The ‘Dreadmill’ is a place you can jog up a storm, and ‘Squat Goals’ will get your thighs and arse muscles burning nicely. 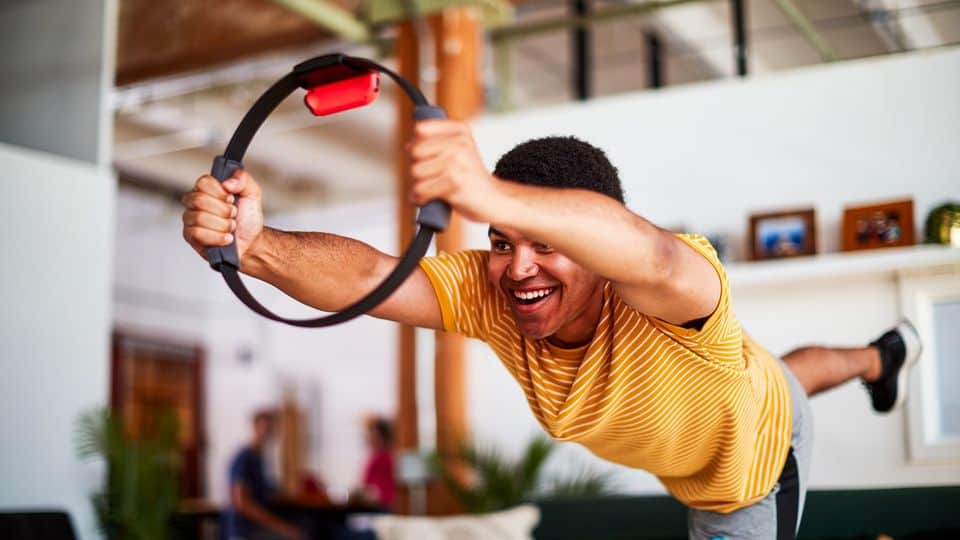 Should you want to target specific muscle groups or parts of your flabby body, there are sets of exercises that will do just that, and if your Switch is turned off and you still fancy messing around, doing a bit of flexing with the Ring-Con, then you can play in ‘Multitask Mode’. Playing Multitask Mode can earn you gifts and bonus EXP to take into the Adventure, as well as gifts to share with friends. No stone has been left unturned in providing a constant method of working out, even providing a function that allows you to set an alarm as a reminder to work up a sweat.

In all, there are 40 exercises that serve as attacks to fend off monsters in Adventure mode, or as part of a Fitness List that you can put together to create your own custom workout. Some are basic, like squats, crunches, overhead presses, pulls like your shooting an arrow from a bow, and other exercises that wouldn’t look out of place in a yoga class. Not only will Ring Fit Adventure make you fitter then, it’ll also make you more flexible, if you commit to playing it on a schedule as intended.

Wonderfully simplistic but effective, Ring Fit Adventure may see another peripheral eventually end up consigned to a cupboard, along with your Wii Balance Board, Kinect, dance mats, and whatever else. But if you get the bug, it could transform you into your most svelte, muscular, best-ever self. It even reveals a Joy-Con feature I didn’t know existed: the IR sensor on the right Joy-Con can read your heart rate. Ring Fit Adventure is just full of surprises. 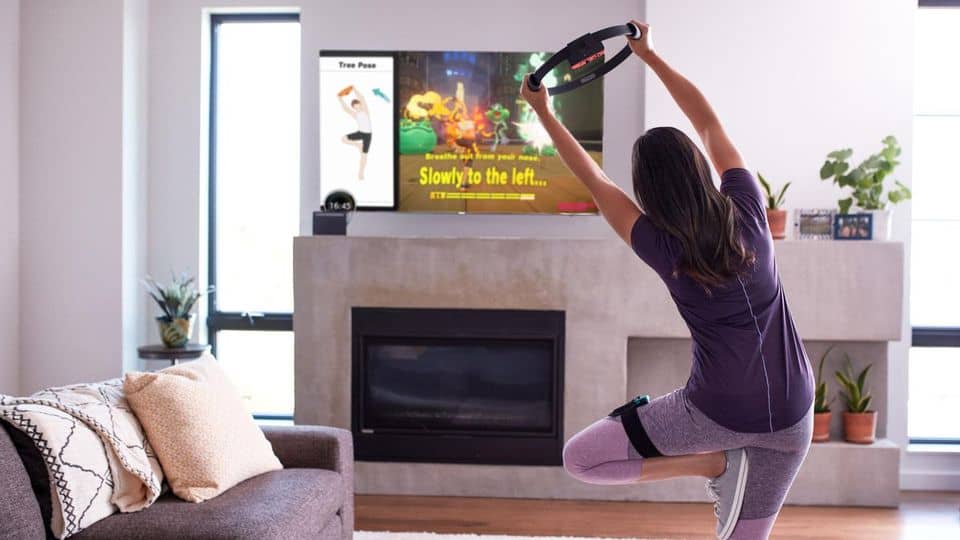 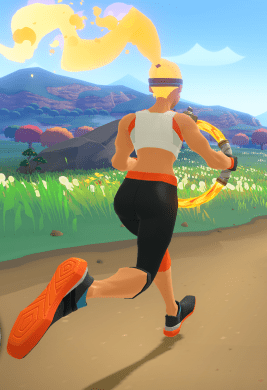