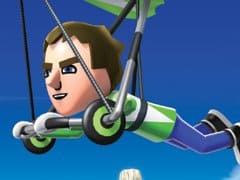 Wuhu Island is a lovely, picturesque place, complete with beautiful blue skies and calm seas, but we’ve seen it more than once before. Nintendo’s Shigeru Miyamoto seems to love it so much that he even said that the island is becoming its own character. Sadly for us, Wuhu isn’t the Mario of the video game island world, so choosing to set 3DS launch title Pilotwings Resort on it has given the title a somewhat dated feel by default. Yes, you can do new things, but playing Pilotwings feels more like a nice day out with your Nan than exploring an exiting new place while on holiday – except here the old dear has a jetpack strapped to her back.

Pilotwings Resort follows successful entries on the SNES and N64, finally giving fans what they’ve wanted for many years after Nintendo refused to bring a new game to the GameCube or the Wii. Part flight sim, part aerial gymnastics tool, your task is to fly, glide and propel yourself (well, your Mii inside a vehicle) around the sky, soaring through hoops, shooting targets and taking pictures, before trying to land as skilfully as possible.

Mission mode is the meat of Pilotwings, offering five difficulty levels each containing a set of challenge missions: Novice and Bronze include six while Silver, Gold and Platinum include nine. Each set of missions is split over three classes – plane, jetpack and glider – while progression is based on stars earned for your performances. Each mission is graded out of three stars, with the next difficulty level unlocked once an average of two stars per mission have been earned – something that comes rather easily.

To begin with the plane will simply need to be guided through checkpoint rings and then landed within as short amount of time as possible, but as you progress the missions increase in difficulty. Target shooting is soon added to the mix, and then a turbo plane becomes available that reaches a dangerously fast top speed, making those rings devilishly hard to fly through unless you know what you’re doing. At one point you’re even tasked with putting out fires along the beach.

The jetpack is the trickiest to manoeuvre around the sky as it has no gliding ability, instead having to rely on jet propulsion. It is able to hover on the spot, though, which comes in handy if you want to spin around without gaining any altitude. Early missions see you flying from landing pad to landing pad before finally setting down, but you’ll also be rounding up UFOs, knocking crate-carrying balloons into delivery zones and controlling a souped-up jetpack.

Quite why this is lumped into the jetpack category is a mystery, but a free-diving squirrel suit is used to drop down through the sky at great speed and then glide through rings. Sadly this suit is only used once, which feels like a missed opportunity as it’s the closest the game comes to the skydiving challenges in the original.

Finally there’s the glider, the entirely wind-powered craft that your Mii hangs from as you attempt to ride thermals dotted about the island. Challenges here range from flying through rings to reaching a certain altitude, and there are also pictures to take of landmarks on Wuhu Island. In the latter stages you unlock a pedal glider, which requires management of your Mii’s energy, represented by a trio of hearts, but as with other bonus crafts it’s not used too often.

Each mission has a clear goal, but your final points score is based on more than how well that objective is achieved. Point capsules are available to fly through and collect, guide dots earn a smattering of bonus points, the quality of your final landing impact and accuracy are graded for points and a fast completion time will give you another points boost. If you haven’t worked it out yet, the stars you earn are directly linked to your points.

What’s on offer in Mission Mode is certainly fun, but in less than three hours you’ll have seen most of what it has to offer. Sure, you can choose to replay missions and aim for three stars on each, but there’ll be nothing new to do. It’s bizarre that certain mission types aren’t used more, and it’s almost criminal that the skydiving isn’t made more of. The N64 game also featured different selectable characters, with their various weights adding more depth to the gameplay. Here you just play as your Mii.

Free Flight mode is given equal billing on the game’s main menu, but in reality this isn’t nearly as entertaining or challenging as Mission Mode. You’re free to choose your craft and then you fly around the island, pulling tricks through rings, passing locations and popping balloons. After each timed run you’re given a breakdown of your performance, but the bigger goal is to see and do everything on the island.

Pilotwings Resort is a pretty looking game thanks to the idyllic island setting, but it’s not a technical showcase for Nintendo’s new handheld. Draw distance is the game’s biggest achievement, but the island itself isn’t exactly bustling with detail that would push the hardware. As mentioned right at the start, the island has been used numerous times before, so there really isn’t any sense of discovery if you’ve already cruised around it. In this regard it does seem like a fairly lazy design choice, but perhaps an understandable one given the often rushed development of launch titles.

One area of concern is the use of 3D. With the 3D slider set to max Pilotwings Resort isn’t an easy game to look at, with background detail in particular being awkward to focus on. I found that lowering the slider made for more comfortable viewing and caused less eye strain.

As ever with a new console, it’s fairly easy to overlook serious shortcomings in launch software, but Pilotwings Resort’s failure to live up to its brilliant predecessor is a disappointment. It’s unlikely you’ll be playing this once the next wave of 3DS games hit, but there’s enough here to warrant this being one of your initial purchases.

It's unlikely you'll be playing this once the next wave of 3DS games hit, but there's enough here to warrant this being one of your initial purchases.
7 Fun while it lasts Pretty island location Not enough to do Island has been seen before

Test your aerobatic skills on the island.

Test your aerobatic skills on the island.