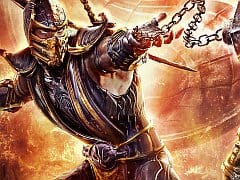 One of the best things about Mortal Kombat’s Fatality system is that it tempts you to flirt with disaster. The last drops of stamina are smacked from your opponent, the iconic cry of “Finish Him!” rings out, and then everyone holds their breath as they wait to see what happens next. Your sweaty hands skitter across the pad, scrabbling for the arcane sequence that unlocks the ultimate prize. Pull it off, and you’ll bask in the utter humiliation of your rival; screw up, and your fighter will simply jerk back and forth in a pathetic dance – and a decidedly non-fatal one, at that. It’s embarrassing when this happens, and most of the time you’ll wish that you’d simply plumped for an unimpressive-but-safe uppercut. Yes, you won the match – but in most people’s eyes, you lost.

You’d be forgiven if you were expecting NetherRealm studios’ latest revival to fall on its arse in similar fashion. It’s been a long time since the series’ glory days, while 2008’s Mortal Kombat vs DC Universe was a curiously neutered affair. What did it matter that the action was both solid and accessible? The violence was lamentably tame, robbing the game of its trademark theatricality. In short, the franchise seemed to have lost its soul, as if the villainous Shang Tsung had sucked it out and… well, done whatever it is he actually does with all those stolen essences. Perhaps he just locks them up in his spirit cabinet.

In any case, it’s clear from the get-go that Mortal Kombat 2011 is a different beast. NetherRealm has finally given us the 2.5D perspective that we’ve long clamoured for, deliberately invoking our nostalgia for the original trilogy via the return of classic backdrops, and a cast entirely composed of long-established characters. More importantly, it’s both exceptionally gory and surprisingly funny – provided you’re the kind of person who can laugh at cartoon dismemberment.

It’s telling that one of Shang Tsung’ Fatalities directly apes The Joker’s finisher from MK vs DCU: Tsung transforms into a horrible clown, pulls a gun from his pocket and fires – producing a mocking “BANG!” flag; at this point, he then produces a real gun and unloads it into his opponent’s face. But whereas the 2008 rendition featured the victim slumping to the floor – or even dying off-screen in the US version – here we’re treated to a slow-mo explosion of bloody head-chunks. It’s a moment that seems to directly address the fans; “this one’s for you.”

And it certainly is. It’s weird to think of people getting misty-eyed over the reappearance of sentient, carnivorous trees, and yet there’s something oddly heart-warming about fighting in The Living Forest, and scrapping in front of their evil wooden faces – especially when you realise that you can now feed your rival to them. While some of the cast have had their appearance and moves tweaked, they’re all recognisable descendants of the psychotic ninjas, robots and unsuitably-dressed femme fatales we met and loved in the early ’90s. The only exception is Kratos, making a cameo appearance in the PS3 version. He’s certainly a far better fit for the game than Yoda and Darth Vader were for Soul Calibur IV, and one of his Fatalities even includes a playful reference to God of War’s QTE sequences.

As drenched in nostalgia as the game may be, there are naturally a few new mechanics nestling among the age-old sweeps, uppercuts and projectile spamming. A new three-part gauge at the bottom of the screen slowly fills in response to damage suffered by your fighter, and by turn this allows for enhanced special moves, combo-breakers, and the much-publicised X-Ray moves. While the first two add a slight degree of tactical play, the latter are as subtle in form and function as a baseball bat to the face. Assuming you have a full meter, pulling both pad triggers together will unleash an unblockable attack that sees you snapping your rival’s bones and busting their organs in extreme, see-through detail.

The only problem with the X-Ray attacks – aside from the fact they’re nastier than most Fatalities, but lacking in humour value – is that they’re both extremely powerful, and a cinch to pull off. While it is possible to avoid them the window of opportunity is very brief, especially if they’re used as part of a combo. If you thought that Street Fighter IV’s Ultra’s threatened to unbalance the game, you’ll hate these sequences – but you’d better get used to them, as you’ll see them in each and every match. Skilled players will bait their enemies, and obviously you can always respond with an X-Ray of your own, but it still feels a bit unfair when you lose a third of you life-bar in an instant.

Still, Mortal Kombat has never been particularly concerned with fair play. While the likes of Street Fighter and its peers encourage the pursuit of technical perfection, MK seems content with pushing for victory by any means necessary – via a carefully-timed juggle, or simply by hitting your foe with the same move over and over again. While the game includes a tutorial, the truth is that this is an extremely easy game to pick up and play.

At the same time, there’s a still a hint of the old clunkiness that always made the franchise a lesser fighter in the eyes of Street Fighter purists. Basic moves feel hefty and solid when they connect – particularly the uppercuts, which are still among the best in the business – but it’s still not uncommon to see moves connecting or missing when it feels like the opposite should be true.

And yet strangely, I personally feel that Mortal Kombat benefits from this occasional scrappiness. There has always been a strange B-Movie quality to the game, both in terms of the way it plays, and the bizarre inter-dimensional Enter the Dragon plot. This latest game absolutely revels in its own kitsch style, and nowhere more than in the surprisingly great story mode. A stock time-travelling device is used to take us back to the plot of the second game, and from here the campaign takes us on a guided tour of the major moments in the series’ lengthy history, with a few revisions here and there for good measure. You’ll learn why Scorpion hates Sub-Zero, see how Jax lost his arms, and spend some quality time in the company of Hollywood tosspot Johnny Cage.

The Unreal Engine doesn’t hold up as well in cutscenes as it does elsewhere, but by using in-game models NetherRealm is able to transition straight from video into live play. The voice acting isn’t too bad either, although it’s the superlative sound effects that make you feel like your playing through a forgotten chopsocky flick. At any rate, Story Mode is a million times better than all of the Mortal Kombat films put together.

Playing through the story will take you a good eight hours or so, but there’s certainly no shortage of content elsewhere. Aside from the standard Ladders and the new Tag Team matches (which make for lengthy, exhausting battles), the real gem is the 300-stage Challenge Tower. Here the core gameplay is endlessly tweaked and fiddled with, presenting you with minigames, handicap matches, and bizarre scenarios where you battle zombies, or where Scorpion tries to stop Mileena from giving him a cuddly toy.

There’s a huge amount of variety here, and several of the modifiers also make their way over to the Test Your Luck matches, which are best enjoyed with another player. Here a number of reels are spun prior to the start of the scrap, resulting in a number of match-altering effects. Depending on the results, you might find yourself magnetically stuck to the floor, targeted by random missiles, or without both of your arms. Using the maximum number of reels combinations can lead to fights that are barely playable by conventional standards, but the results are often hilarious. There’s something likeable about NetherRealm’s willingness to fool about with its own systems, and it’s hard to see more serious games ever following suit.

It’s just as well that there’s so much to enjoy in terms of offline play, because at the moment there are question marks over the game’s online capabilities. I can’t be too judgemental on this front at this stage, as most of the people I’ve played will have been based in the USA, but it’s still concerning that I haven’t been able to get a lag-free game. Some American users have uttered similar complaints, although naturally there are also plenty of people who say that everything is fine, and that complainers are simply trolls. Only time will tell who’s right, but let’s hope that things will improve once the game is out in Europe. In terms of what’s on offer, there are 1v1 and tag team matches, plus a winner-stays-on King of the Hill mode. Bizarrely, the Xbox 360 version of this finds your LIVE Avatars watching and gesticulating at each match from the sidelines, but thankfully there’s an option to go full-screen instead.

Regardless of how the netcode eventually performs, it’s inevitable that Mortal Kombat will always be more fun to play against a local opponent – someone by your side who can laugh with, jeer at, and punch in the crotch when they knock you into The Deadpool. It lacks finesse on occasion, but it also rarely offers anything less than an extremely fun fight – even if it’s not always a fair one. There’s a small mountain of hidden content to unlock and discover, and if you’re even a vague fan of the original games you’ll appreciate the nostalgia factor too.

Indeed, this new game feels like such a thorough piece of fan service, it’s difficult to see how NetherRealm Studios will ever be able to follow it up, as it feels like there’s little left to do. Still, for now that doesn’t matter. Mortal Kombat feels like the return of an old friend – a thoroughly unhinged friend, but one we’re delighted to have back.

Mortal Kombat feels like the return of an old friend - a thoroughly unhinged friend, but one we're delighted to have back.
8 Easy to pick up and enjoy Masses of great content A return to the Mortal Kombat of old X-Ray attacks seem a little too powerful