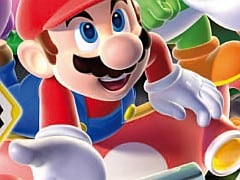 Mario Party used to be a bit of a guilty pleasure for me. I played the series most when it was on the Nintendo 64, with its boardgame meets mini-game collection hybrid proving to be ideal for multiplayer sessions. I never thought I was playing an amazing video game, but I generally always had fun with friends. Since then the series has stagnated somewhat, but Mario Party 9 offers a refreshing new spin on the tried and tested gameplay.

A single-player mode has been included, complete with a loose storyline involving Bowser trying to get all the mini stars, but it’s fair to say that playing Mario Party 9 alone is like hosting a dinner party and not inviting anyone – sure, you’ll get to eat all the same food, but there won’t be any conversation and you’ll be quite lonely.

Playing with friends is where Mario Party 9 comes alive, and this latest effort is the most exciting (yet also unfair and often cruel) title in the series I’ve played in a long time. In a change from the norm (but not unheard of in the series) you and up to three friends all jump into a single cart and take turns being the captain. As captain you get to roll a dice and get the rewards or benefits that result from where that roll takes you on the board.

For example, if the cart trundles through some mini stars while you’re captain they’re yours, but conversely, encounter some evil purple ztars and you’ll lose that number of mini stars. You’re also in control of any mini-games that occur due to where you land, with the captain being offered more mini stars for winning than your passengers are – although the twist is that it’s you vs. everyone else.

Although much of the game is spent rolling a dice, the mini-games had to be good in order for the game to be more than a virtual boardgame, and thankfully they are. The good news is that most of them don’t require any over-the-top motion control, instead generally relying on the Wii Remote as a pointing device or being held as an old-school controller. The days of wacky motion controls on Wii seem to be over.

Each game is split into three segments, with updates on scores given to make sure everyone knows who’s winning and losing, and along the way you’ll hit various tiles that result in special mini-games, unlock useful special dice, send you off to a special area or see you head back in the opposite direction.

There’s no doubt that the entire game is massively luck-based, but it works brilliantly in a multiplayer environment, as a sense of being hard-done-by as someone else comes from nowhere to win makes for pure fun. You’ve obviously got an element of skill in the mini-games, and choosing which die to roll is important if you have more than one in your collection, but there’s always a feeling that no one is ever completely out of the game and that everything can change in an instant.

Nowhere is this more apparent than when you land on a Bowser tile, with the Mario series meanie then proceeding to dish out one of a selection of punishments or rewards – these include giving mini stars to the last placed player or losing half of your stars! Bowser also sends out his minions to battle you at certain points in each game, and here you work together with the other players in some of the best mini-games – although there’s still a winner in each, decided by who contributes the most to the boss’ demise.

Add to this the various stage-specific risks – such as sharks that catch up with you and take stars from the captain in charge, Boos that emerge from pictures and chase players, or events that turn stars into zstars or vice versa – and there’s rarely a moment when something isn’t happening to turn everything on its head.

Outside of the solo and multiplayer modes there are a few fairly trivial menu options, including a museum that lets you spend Party Points and the ability to play a few special versions of the mini-games, and access the standard games directly without going through the party system.

We all know that the Wii is on its last legs, and that games released for it are severely lacking in visual panache compared to what you can get elsewhere, but Nintendo has managed to make a charming-looking game. Importantly, despite a clear lack of technical wiz-bang, Mario Party 9 feels lovingly created, which is more than can be said for a lot of games on more powerful systems.

Essentially, Mario Party 9 is a great leveller. No matter if you play games for a living or only touch a controller when one is forced into you hand, chances are you’ll be in with a shot of winning come the end of the each game. The Wii has always been about bringing people together to play, and Mario Party 9 does that considerably better than I thought it would.

The Wii has always been about bringing people together to play, and Mario Party 9 does that considerably better than I thought it would.
7 Some nice new ideas Tons of fun with friends Playing alone isn't much fun If you only play skill-based games, look elsewhere