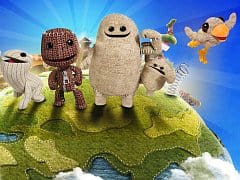 LittleBigPlanet is a strange beast. I’ve now finished six games starring Sony’s wannabe mascot, and have largely thought them to be pretty ace (aside the Karting). The original had huge potential and offered the community the tools to become creators themselves; the sequel actually delivered a great campaign while improving everything else, but now the third home console title (the first not developed by creators Media Molecule, this time under the wing of Sumo Digital and a handful of others) attempts to push things further: a campaign that features explorable hub worlds, three new playable characters, a playable gateway into the creation tools, and Hugh Laurie. Some of things work out better than others.

House MD takes centre stage as good guy gone bad, Newton, becoming possessed by three evil titans who want to destroy the world of Bunkum. Previously these titans had been taken down by three heroes, and it’s down to you (Sackboy) to traipse across three zones in order to bring OddSock, Toggle and Swoop back to save the day.

These guys don’t have any tools to use, but they do each have unique abilities that see them differ quite drastically from good old Sackboy. OddSock is by far my favourite newbie, feeling like a modern platform hero, able to run up and across walls (making the most of LBP3’s increased number of layers, giving it a slight resemblance to the Saturn’s Bug at points), and wall jump. Because of this his sections feel faster and more free-flowing, with a tinge of Super Meat Boy about them – just nowhere near as soul destroying.

Toggle isn’t a bad addition, either, with his ability to, well, ‘toggle’ between big and small allowing for some level design shenanigans. As fat Toggle you can weigh down platforms, sink in water and smash through glass; whereas vertically challenged Toggle fits through smaller spaces, pops out of water and can be propelled from a depressed switch. The way you play around with his two states is pretty neat, although never genuinely smart, even if certain moments will test your reflexes and agility.

Swoop is the weakest of the bunch, with his sequences being less about platforming and more about flying through obstacle-laden areas and carrying items. While the gameplay is solid enough, the character only really comes to life in an exciting way when you’re tasked with flying at speed, resulting in some dices with death as the environment changes around you. It’s perhaps no surprise that Swoop’s levels stand out the least.

But then again, there simply aren’t many stages for any of the new characters, at least in the campaign. The majority of the story levels see you playing as Sackboy, venturing to find the three stitched strangers (darned debutants?), with Sack himself being given new toys to play around with. Among others there’s an air cannon that can suck and blow (I know, it’s even called the Pumpatron), a teleportation gun of sorts that transports you to portals you’ve hit with your gun, and jetpack boots, and they all provide some neat new gameplay.

What’s more, they open up areas of levels you previously couldn’t access (as do the new characters), giving the game a Metroidvania feel. This is true in the levels themselves and the new hub zones, areas that need to be explored in order to unlock all the stages the game has to offer. Sadly the core campaign is over far too quickly, easily feeling like the shortest the series has seen. There’s more levels hidden in each hub, but if you’re someone who never bothers with side missions, it’s possible to breeze through the story in well under a day’s play – a shame considering the general high quality of what’s on offer.

You’re then left with the creation campaign, a series of levels that act as playable guides to the game’s suite of complex tools. There’s no doubt that this addition is the best way the series has ever introduced the creation side of the LBP experience, gamifying it in a manner that’s both fun to play and educational. I can’t say it made me feel like I could build levels, but it might have that effect on you, and that’s a good thing.

As ever, the hope is that the community will take the tools on offer to create levels as good as or better than what has been made by the dev team. I can’t say I’ve ever played more than a handful of user-created levels or experiences that delivered this promise, and currently the LBP3 creations are in short supply. The recently finished Final Fantasy VII remake in the LBP engine is a fine example of what is possible, but in terms of a playable campaign to rival those made by the devs themselves, only individual stages have stood out over the years.

LBP3 reaches new highs for the series by delivering some of the best levels and gameplay yet seen, but also disappoints with a fleeting campaign. The push for users to deliver the content is greater than ever, and the tools to do so are superb, but it’s hard not to want more. Considering there’s so much here if you look at the package as a whole, that might seem greedy, but this isn’t being sold as just a creation suite.

It’s hard to know where LBP can go after 3. While this is cross-gen and doing little to push the PS4, and I’m sure a prettier PS4-only side-scroller could be made, it would probably be more of the same. The LittleBigPlanet Hub, the announced but then quietly forgotten about free creation suite, seems like the logical way to keep the original community alive, allowing the series to move to 3D for the next big instalment.

At times the LBP games have been more about the experience than the platforming, so a 3D adventure in the style of Banjo Kazooie would work extremely well. The Banjo series has also dabbled in creation, with Nuts & Bolts using it extremely well. The design of LBP3 even fits into this idea, with its hub worlds easily transferable to a new 3D environment. It’s the kind of set up we’ve seen in 3D platformers ever since Mario 64 wowed everyone back in 1996.

With a massive 3D space to create the developers could really go to town, creating gorgeous worlds to explore, and the freedom of movement would allow for creativity to go in exciting new directions. In terms of user creations we’ve also had numerous games that offer their own takes on world creation, from Forge in Halo to entire game building in Project Spark – the task, surely, wouldn’t be beyond the LBP dev team.

LBP3 reaches new highs for the series by delivering some of the best levels and gameplay yet seen, but also disappoints with a fleeting campaign.
8 While short, the campaign is great fun New character and tools are largely excellent Creation campaign introduces tools very well Not very next-gen and lacking story levels