One could be forgiven for coming to Dying Light 2 Stay Human and expecting the light to be much more dead. The game is about a zombie plague, under whose cold thumb humanity has been smeared, but what do we find? Cities with fecund skylines, doughty folk who leap between rooftops like squirrels, and, even down on ground level, the groaning dead are dappled in sunshine. Not that any Dylan Thomas fans, rabid for action, will find Dying Light 2 short of things to rage against. Our hero, Aiden, is looking for his sister, Mia, and that impatient quest puts him in the company of hopefuls, drinkers, ditherers, dotty inventors, muscle-minded brutes, and crazed scientists. Forking absolutely no lightning, their words often leave Aiden flustered. “How does all this get me to the Central Loop?” he asks, during one of those meetings that have run way over. Good question.

The Central Loop to which Aiden refers is a walled-off district of a European city, wherein he hopes to find traces, either old-fashioned or electronic, of Mia. The developer, Polish studio Techland, has furnished this mission with a blend of first-person melee combat, R.P.G. mechanics, a spate of open-world rituals, and a spirited dose of parkour. The latter is reminiscent of Mirror’s Edge (never a bad thing), whose heroine, Faith, clad in shoes of cloven rubber, scampered across a gleaming-white metropolis. We get a bobbing camera, the whip of limbs in the periphery, plus a helpful strewing of environmental aids—inclined solar panels for the springing, poles for the swinging, and counterweighted ropes that haul you, like a hooked fish, into the heavens. “The world’s already ended, right?” one character points out, urging us, quite rightfully, to “just have fun.”

Indeed, if, like me, you have a weakness for the zombie-hued, and for the sway and flail of first-person platforming, guaranteed to bedew one’s controller with sweat, then Dying Light 2 is easy to recommend. Unfortunately, there is also a nasty shard of Mirror’s Edge Catalyst here. That game tried to expound the pleasures of the first by reflecting the popular mechanics of the day. Rather than keeping faith with our wits and rewarding our experimentation, it took away basic techniques—available from the start in the previous entry—in a bid to get us chasing the experience points required to unlock them. Likewise, Techland has planted a skill tree at the heart of the action, and it’s in desperate need of pruning. Honestly, in an adventure that centres on free-running, why have us unlock the ability—usually introduced in a tutorial—to sprint? As such, while playing Dying Light 2 we face a similar struggle to Aiden’s, as our central loop is, again and again, walled off. 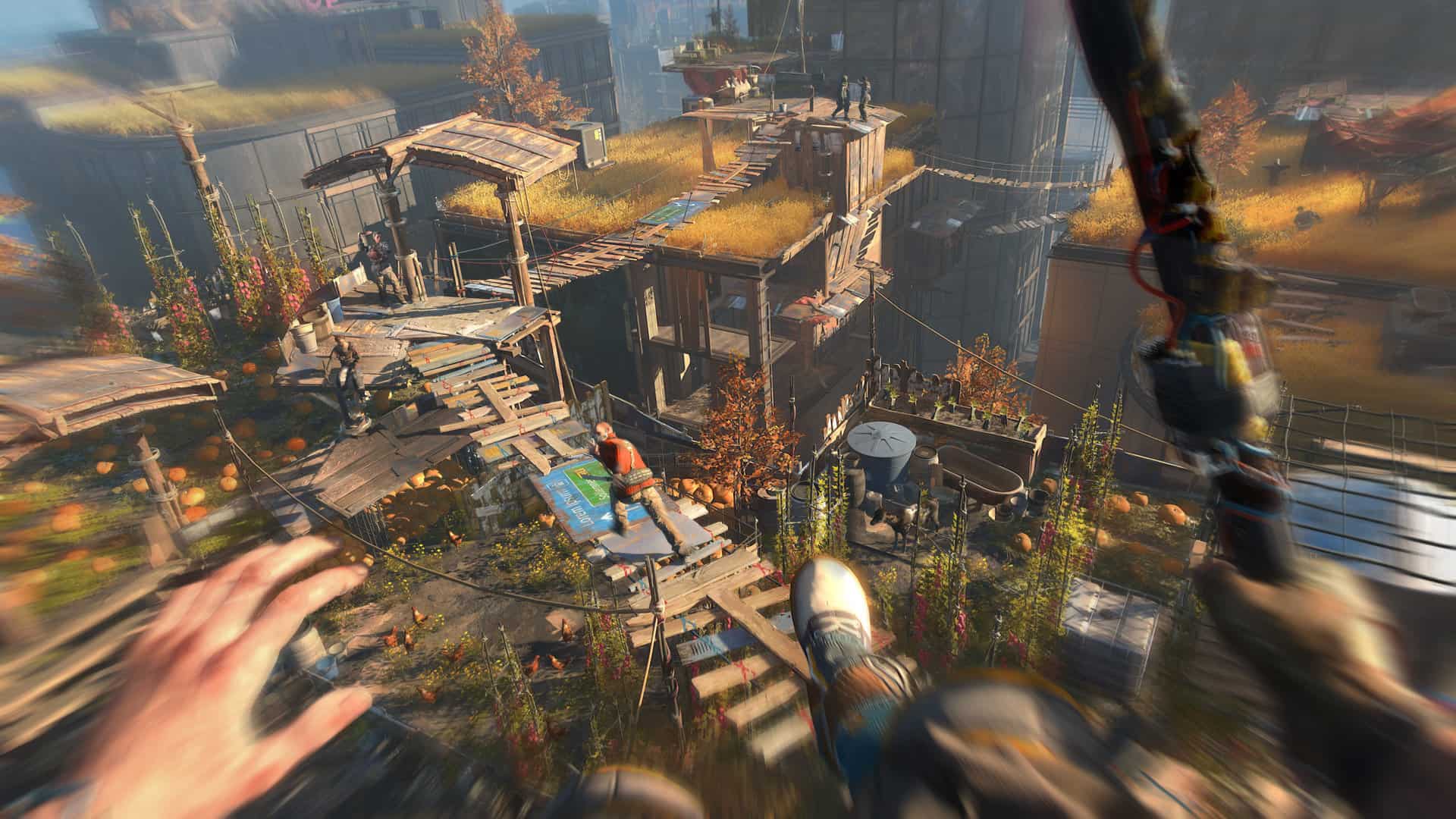 The reason for this, I fear, has to do with padding the game’s length. Before its release, Techland boasted that Dying Light 2 would take five hundred hours to fully complete, which, the studio noted, is “almost as long as it would take to walk from Warsaw to Madrid.” This was a risky strategy, offering us, in the dying days of our own plague, fresh-aired alternatives with which to spend our hours. I must admit, hearing this, and pondering being cooped up with corpses for such a span, Madrid seemed much the more desirable option. Still, for those who measure their money’s worth in terms of running time (Aiden would surely approve), you can’t argue with the value.

The problem is that it takes a slew of hours to get the parkour up to standard, installing in our hero’s head such firmware upgrades as the wall run, the long-distance leap, and the power—a mystery to many—of sliding along the floor. Once these are in place, it’s very easy, as Aiden’s comrade advised, to just have fun; but if they came preloaded the fun would have kicked in all the sooner. At any rate, there are some upgrades that are delivered with perfect timing, and they inject a good dose of pep to the journey. My personal favourite is the paraglider, which not only lets Aiden drift above the mouldering throng but grants him the opportunity to do a Marilyn Monroe: standing atop a floor grate, he can open his open his chute and feel the breeze, as she did in The Seven Year Itch. Unlike Marilyn, though, Aiden is able to billow upwards on the draft, at a bracing speed, like an apocalyptically gritty Julie Andrews. 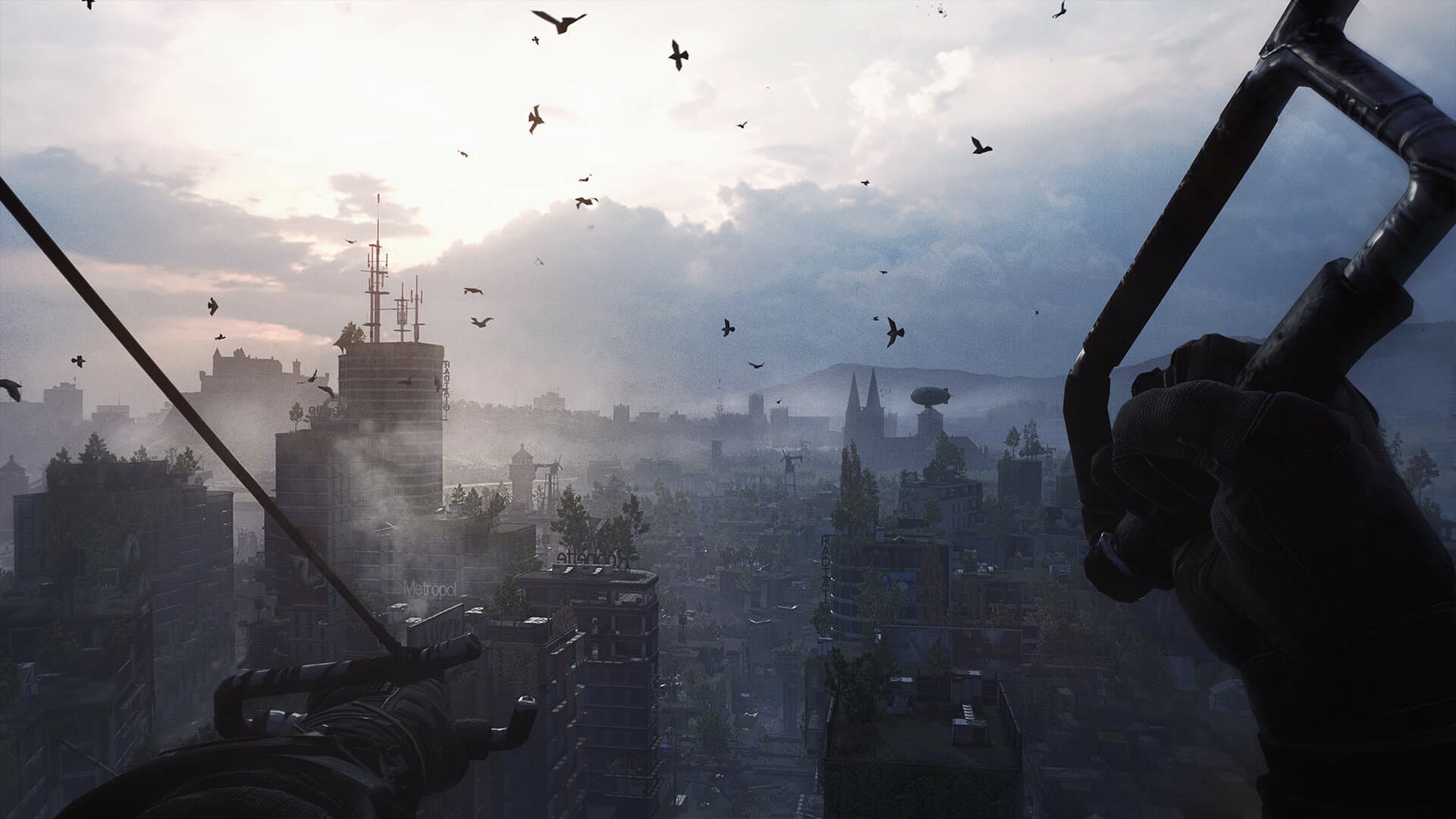 The game’s tone is equally buoyed by sudden gusts of the comic and the would-be weighty. Owing to its R.P.G. structure, we sift through a growing bank of jobs, flitting from, say, rescuing someone at the brink of his expiration, to haring along after a scarf, at the behest of an off-key crooner who complains of an unwarmed neck. These shifts in mood are part of the non-linear deal, of course, and the soundtrack, by Olivier Deriviere, does its best to scarf the cooling drama by cuing up basslines of thrumming synth, and string-and-brass raptures. The result is not without its charm, and, as any will know who have spent time in the peeling zones of Romero country, with its low and leaky budgets and its eruptions of gore, a lurching mood goes with the landscape.

Nonetheless, should we at any point confuse Dying Light 2 with documentary, it’s quick to remind us, every time we start, that it cleaves instead to the fictitious, and that “any resemblance or similarity to actual events or incidents or places or persons, living or dead, is purely coincidental.” Except for Rosario Dawson. She lends her likeness and voice to Lawan, another free-runner, who helps Aiden in his undertaking. But even Dawson, an actress of talent and pluck, wavers in Techland’s climate. The game is written by Jerrold Brown, who jams in character development wherever he can. At one point, via a walkie-talkie, Lawan delivers a burst of backstory—“Saw my dad once in my whole life. And if my mom was good at anything, it was drinking. She abandoned me”—and I couldn’t tell whether it was radio static, or the crackling bandwidth of a strained performance, but her lines seemed to perish on the air.

The good news is that Dying Light 2 survives these blights. One reason for this is the combat, which echoes with the wet crunch of bone and revels in the art the makeshift—axe heads forged from hubcaps, machetes whose blades have been imbued with electricity, as if to tase the life back out of the living dead. There are dodges, grapples, and parries that lave the action in slow motion and allow you to strike back. Most of which will be familiar to those who played the first Dying Light, back in 2015. But no other studio, in the interim, has committed quite so gleefully to the lopping of limbs as Techland, and, if you thrilled to the spectacle then, this will satisfy your seven-year itch. 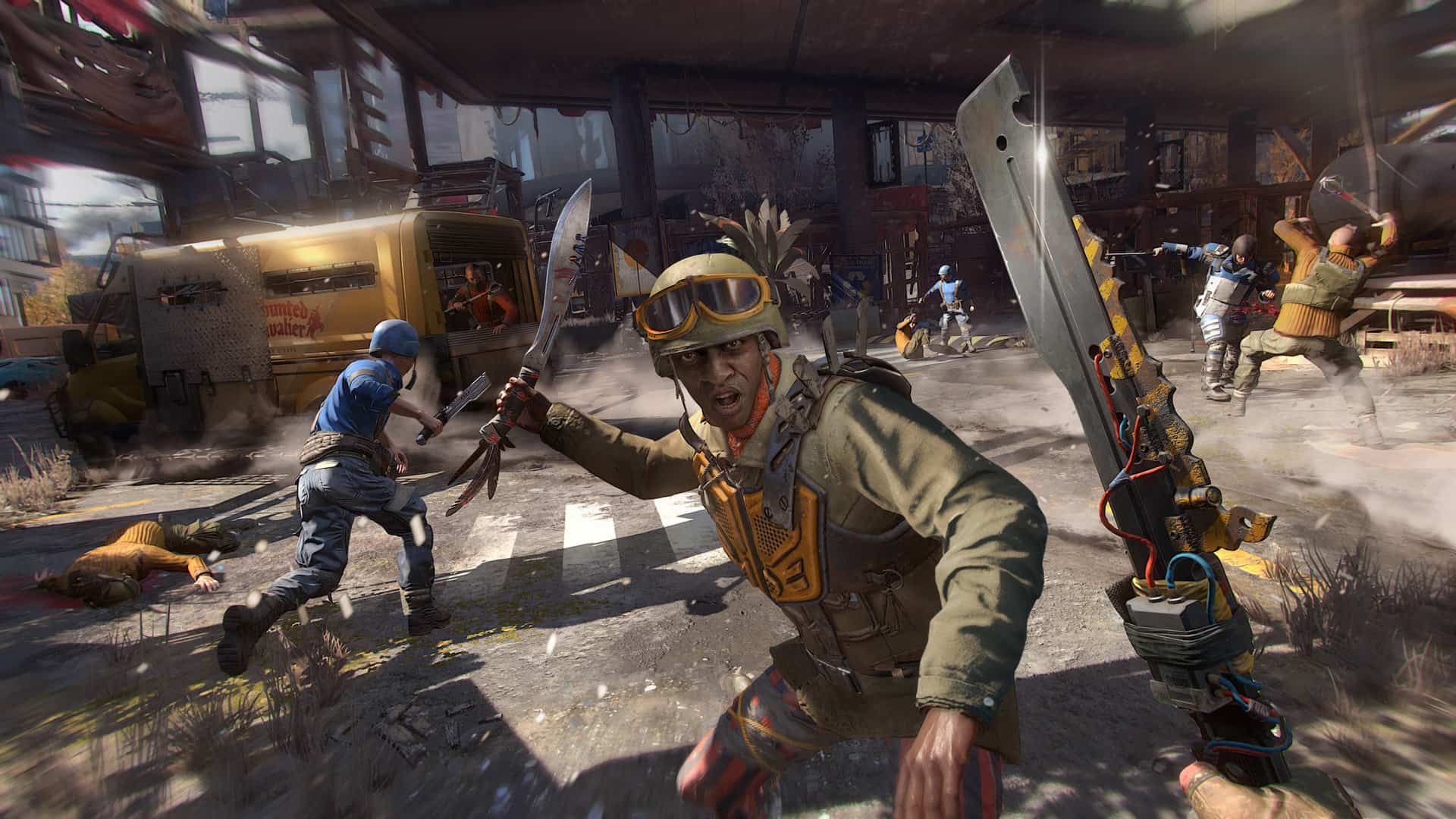 As the subtitle suggests, the challenge, in any zombified scenario, is to keep hold of one’s humanity—dodging not just infections of the body but those of the spirit. Many, in Dying Light 2, have failed in this regard, armouring themselves in spikes and hockey masks, like extras from a Mad Max film, and marauding through the streets. Thus, it falls to Aiden, who mingles with several clashing factions, to establish some order: assigning each liberated neighbourhood to a clan of your choosing. “The times we live in are ruthless, and the law must be so too,” someone says, although that someone happens to be a gangster, whose face bears the deep ravine of a knife scar, with a tattoo adorning one of the dark bags under his eyes. Proceed with caution.

Frankly, I cared little for this system; there are more interesting things in Techland’s world than the squabbles that colour the map. Much of it is best grabbed on the move. While I’m sceptical that trees can unfurl in such fierce health from the tops of buildings (what about the roots?), I certainly appreciated the sight: no matter how ruthless the times, the law of nature remains unbroken. And I relished the vision of the infected, packed together in rooms, away from the sun, sleeping on their feet—neither quick nor dead, but crammed into a restless realm between. There is fun to be had in Dying Light 2, though maybe not five hundred hours’ worth. You don’t want to end up like them.

Indeed, if, like me, you have a weakness for the zombie-hued, and for the sway and flail of first-person platforming, then Dying Light 2 is easy to recommend.
7 Skill trees Actual trees Story Parkour