The hero of Death Stranding is played by Norman Reedus, whose signature low-lidded scowl has never seemed more appropriate. I mean, just take a look around: the skies are white and watery, and the ground below is bereft. A distant cataclysm, from which the game takes its name, has blighted the world and fallen from memory. Aside from the fact that the dead are having trouble being dead, and the living are having trouble with living, none of the characters seem to know quite what this Death Stranding is or how it works. Imagine that.

Reedus plays Sam Porter Bridges, a courier by trade and a brooder by way of long-buried trauma. The coup of his performance, in providing both motion capture and voice, is just how little he provides. For much of the time he stays stone-faced, adding the occasional grimace; things don’t go unsaid so much as they go grumbled and sighed, as though the life were leaking out of him. Due to the frightening future through which Sam wades, his profession is nothing short of heroic. Humanity is splintered and spread thin, hiding out in crumbling cities and settlements, and the badlands between are prowled by unseen horrors. His daily orders, delivering as dull a payload as seeds or thermal underwear, carry an Odyssean weight.

So what, we might ask, is going on? Details are divulged slowly, trickling through as if from a long thaw. Sam’s mother, Bridget, happens to be the president of the United States – though they’re far from united now – and she happens to be Lindsey Wagner, star of the Bionic Woman, who first appeared in The Six Million Dollar Man. She tasks Sam with reconnecting the country, via what’s called the Chiral Network, which sounds like she’s trying to sell him on a new broadband package, complete with a slogan: ‘You can make America whole,’ she says. (For my money, she should have gone with, ‘We can rebuild it; we have the technology!’) Call me crazy, but I think the director, Hideo Kojima, who co-wrote the script, might be making some sort of point here; as one character delicately points out, ‘If that’s not symbolic, I don’t know what is.’ 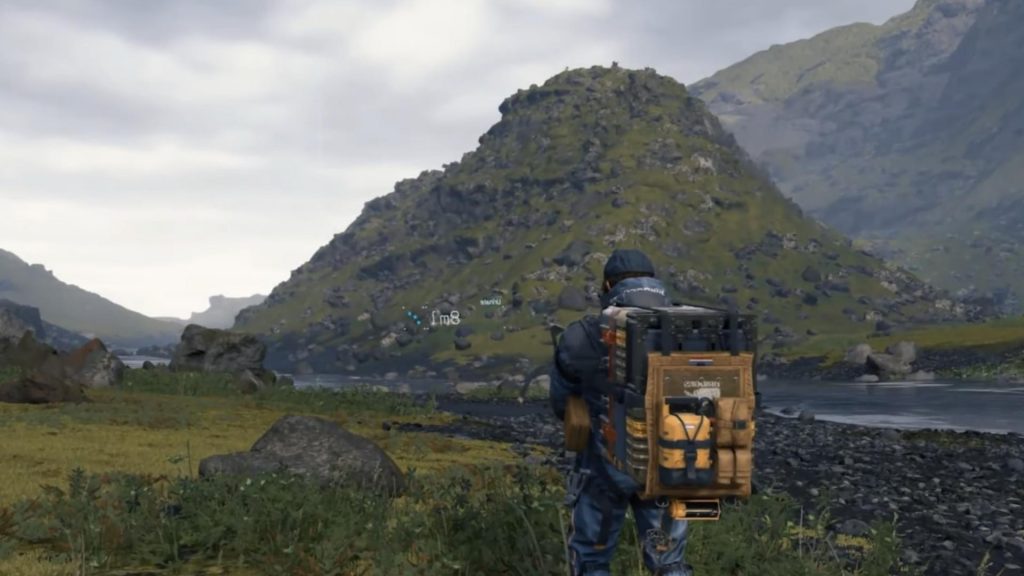 Moving across America, plugging each place into the network, most of your time is taken up by traversal: the shoulder triggers correspond to Sam’s hands, which grip the straps of his backpack in order to secure its weight – both hands when marching through waist-high water, to stop your goods from washing away, or just one hand to shift the weight away from the edge of a cliff, preventing Sam from slewing over the side. Your boots wear down over time, so it’s wise to keep a spare pair handy. You plot your course on Sam’s cuff link (a communicator resembling a pair of handcuffs), tilting the controller to reveal the topography. And be sure to rest periodically, allowing Sam to stretch and rub his shoulders. Quite remarkably, none of this is boring; in fact, it’s often thrilling. Each order you make is graded, with the golden splash of an S-rank awarded for speedy and damage-free deliveries.

It is, in a newer and truer sense, a walking simulator. But there are other parts that make it harder to pin down. This will frustrate those who prefer quick categories – namely the PlayStation Store, which describes it noncommittally as an ‘action’ game. If you stand far enough back, anything can be shuffled into the broadest of genre boundaries. But where is the fun in standing far enough back? Death Stranding beckons you in close, breaking off chunks of horror, stealth, survival, action, adventure, and open-world exploration. While on your route, you sometimes run into Mules: crazed mercenaries addicted to hoarding stolen shipments, who pursue you with pings – radar-like ripples that tag your position – while brandishing javelins that crackle with bolts of electricity. These segments plunge you into stealth of a more stripped-back kind than Kojima fans are used to – reliant on tall grass and easy takedowns. It’s swift and satisfying, dovetailed discreetly into a larger game.

Kojima Productions is a studio whose bones were made in the Metal Gear Solid series, and it’s no surprise that you can see them jutting up here and there like a half-buried skeleton. Note the Codec, which characters use to talk to Sam while he’s out in the wilderness. Meanwhile, there’s more than a touch of Mother Base in the way that Sam’s resources are managed; courtesy of the Chiral Network and its 3D printers, you can ply resources into R&D, cooking up equipment like the hover dolly, to glide your haul over uneven ground, and mech attachments for Sam’s legs, which power up his speed and all-terrain utility. There are vehicles, such as the long-range trike; robots, to make automated dispatches; and, for the civic-minded, there is even the option to build roads, laying the wastes with fresh, flat-surfaced progress. It’s easy to fritter away hours in fascination with infrastructure. 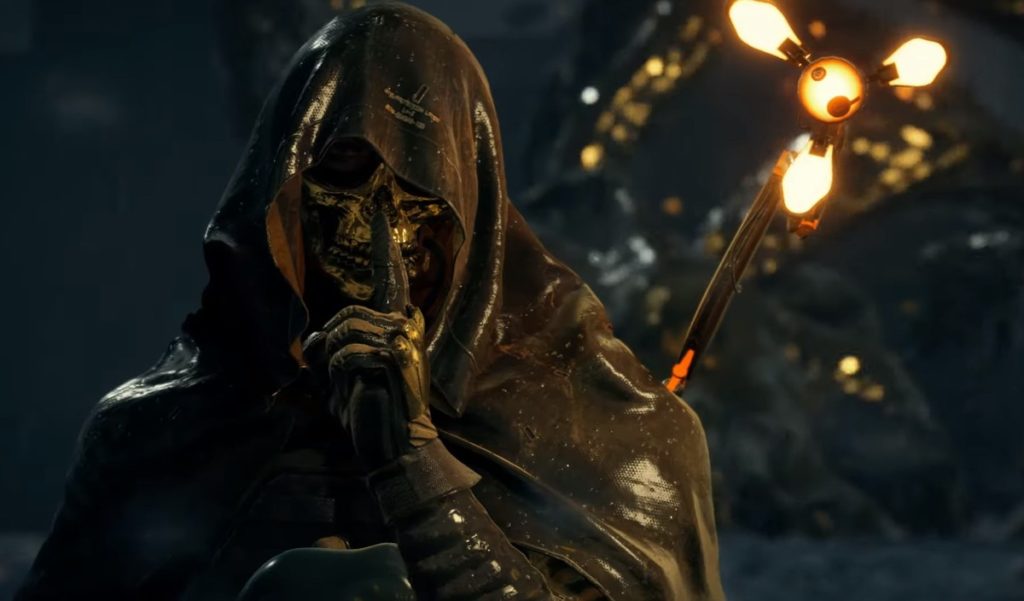 Should such fascinated hours lull you into a lonely solitary, fear not; you have the social strand system to pull you back into the fold of your fellow players. You will see messages, dropped items, and climbing gear, like ladders and pitons, dug into the soil for you to use. I am relieved to say that this system – similar, in its stark spirit, to Dark Souls – is unobtrusive, thematically relevant, and, at times, touching. On more than one occasion, I huddled under another player’s shelter – the rain in Death Stranding, referred to as Timefall, ‘fast-forwards whatever it touches,’ causing accelerated aging (thus the hooded hazmat suits) and rusty cargo containers. (It’s like Rutger Hauer’s closing monologue, in Blade Runner, but replace ‘tears’ with ‘years’.) You can reward other players with likes, which affect their order ratings.

I am also pleased to report, five years on from the release of P.T., that Kojima and his team have strayed into the inky verges of eco-horror. The monsters, called BTs (Beached Things), are invisible. They lurk and gurgle, their presence betrayed by oily handprints, and they just might be the vengeful spirits of the dead, stranded in transit. Fortunately, Sam has a Bridge Baby (BB) – an infant, encased in glass and clasped to the front of his suit, with a link to ‘the other side’. This is hooked up to the Odradek – a miniature metal windmill, fastened to his shoulder, which lights up and flaps in the direction of encroaching BTs. These encounters are clammy with tension; you hold R1 to stifle Sam’s breath, lest the creatures smell the fumes of life, and slowly creep to safety. If your BB is stressed, you can sooth it by gently swaying the controller. All these elements merge to form something fresh, and difficult to market.

The game arrives, buoyed on the hot air of hype, trailing an assault of unwise publicity. (The problem persists in the cinema as well; by the time we’ve had the Teaser Trailer, Trailer 1, Trailer 2, the Superbowl Trailer, not forgetting the Red Band Trailer, and, of course, the Final Trailer – a title that always smacks of apology and promise – we’ve seen most films before they’re actually out.) Death Stranding suffers the great misfortune of being interesting and inscrutable to look at: to all appearances set in the Lake District, furnished with fetuses in jars, skull-faced villains, famous film directors, and the sort of buggies that belong on the lunar surface. It’s the kind of elevator pitch only possible in the Burj Khalifa. 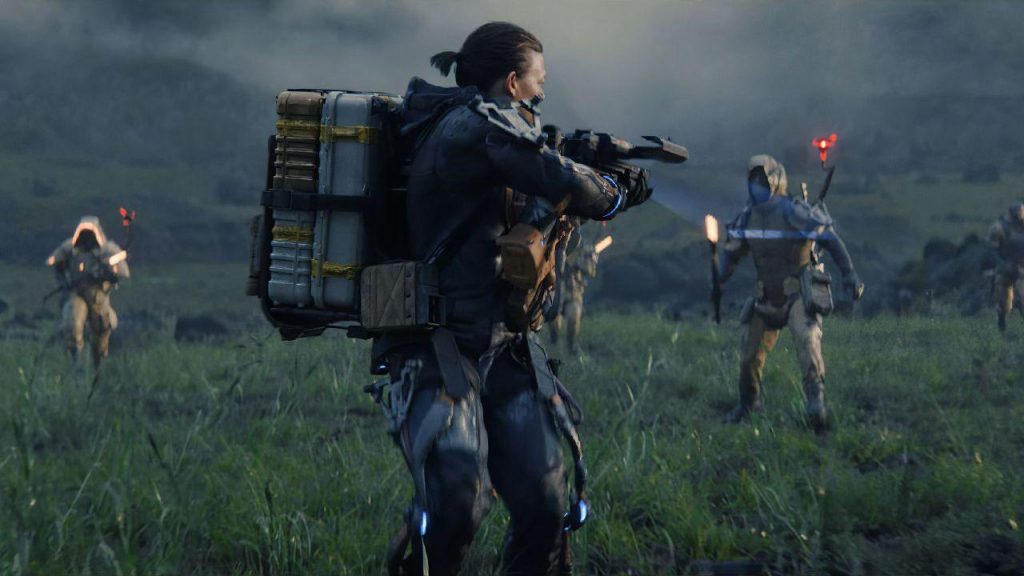 It’s also the result of four years of fresh air. Since his ugly departure from Konami, in 2015, which saw him setting up the independent studio behind this, we’ve seen him tweeting pictures of meals, people, and places, always with a beaming grin. You would think Konami was not an office in which games were made but a Dickensian workhouse, deprived of food, freedom, and human companionship. Spend an hour with Death Stranding and one thing becomes clear: Kojima swapped the cramped confines of his former employer for the cloistral darkness of the cinema. Every frame is filled with the films of recent years.

The biggest influence, from which Kojima derives the game’s visual style, is Denis Villeneuve. Think of the scene, in Arrival, where we are first shown the alien craft, and you see the landscape of Death Stranding: dark crags covered in green blankets of moss, and waves of mist drifting over distant hills. In the city ruins, there are bits of Blade Runner 2049 – blocks of stone as grey as storm clouds, looming through windows of broken glass. There is also a hint of The Martian, Ridley Scott’s film of 2015, in the sight of Sam, in his rubber suit, dwarfed by a sweeping vista of rock. It’s all brought beautifully to life in the Decima Engine and infused with Kojima’s outlandish visual poetry: tar-black beaches strewn with dead whales, and men bearing unborn babies in glowing chambers on their chests.

If only the writing could match the pictures. I shan’t delve into the particulars of the plot; suffice to say that, when scientists babble on about the human soul, I switch off. One character is called Die-Hardman (rumours persist that cut characters include Kill-Billman and a duo called Withnail and Isaac). The dialogue flits between the foolish (‘If we Americans don’t come together again, humanity won’t survive’) and the ludicrous (‘I brought you a metaphor’), and Kojima has two strategies to camouflage the shortfall. One is to lighten the load with humour, sending gags clattering across the fourth wall – hence the mission that sees Sam delivering a pizza, with a straight face, to a far-off research outpost. The other is to hire a cast of very talented actors, whose performances pull your attention away from the blind spots. 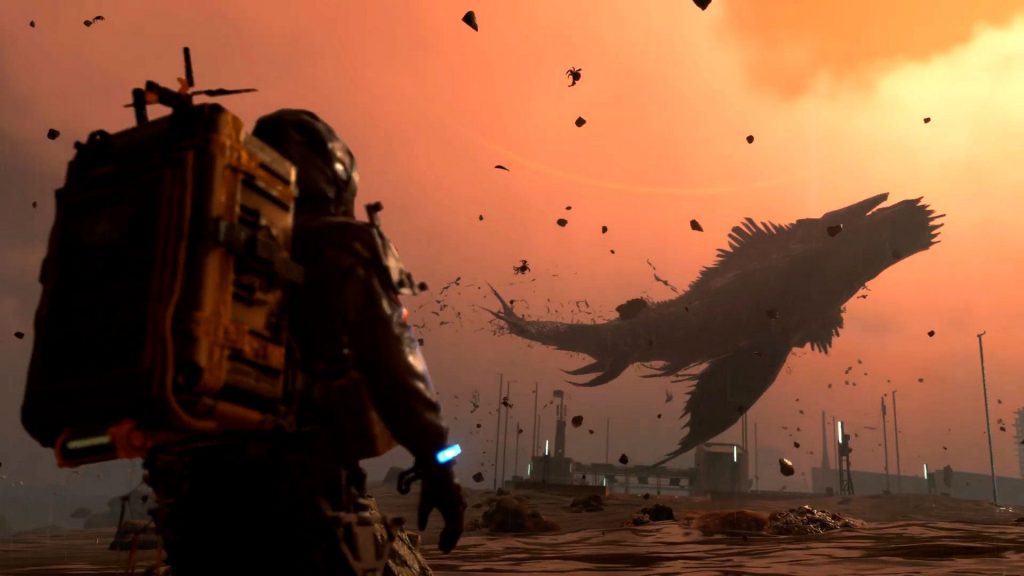 Mads Mikkelsen is an enigmatic villain, called Clifford Unger, though his villainy is submerged in sadness. While Troy Baker, as Higgs, possesses the sort of writhing wickedness that belongs in the reptile house. Margaret Qualley plays an ally, called Mama, acting on a higher wattage and outshining anyone she shares scenes with. And Léa Seydoux, who has that sort of scratchy, faint voice that brings you in close, for fear of missing a word, plays another courier, called Fragile. But I can’t help but wish that Kojima was given slightly less free a hand in some of the decisions; having Guillermo del Toro and Nicolas Winding Refn lend their likenesses to a pair of scientists feels more like a stunt than good casting. What’s more, it pricks the airtight tone of the world (as does the horrific product placement, which sees Monster Energy proudly surviving the end of days).

Most of the time, however, our focus falls where Kojima conducts it. He is a precisian, honing his love of small, simple actions. It’s there when we see the cigarette smoke trickling from Mikkelsen’s mouth, or Mama cradling a baby that isn’t there. These seem inconsequential until, days later, you realise they haven’t left your mind. Kojima once described the video games of the 1980s, when his career began, saying, ‘It was like the era of the silent films. Games were composed of simple actions like those seen in old Chaplin or Keaton movies: running, jumping, digging, throwing.’ In many ways, they still are. Death Stranding certainly is, and it’s filled with things that must be seen. My guess is that all its clunky moments will be lost in time, like cargo in rain.

Death Stranding is filled with things that must be seen, a sprawling, genre-spanning sci-fi adventure from a developer like no other. Its tackier clumps of writing and stunt casting seem overwrought, but its direction and its stars shine brightest
8 Striking sci-fi setting A successful blend of play styles Excellent performances and direction Writing is in need of subtlety