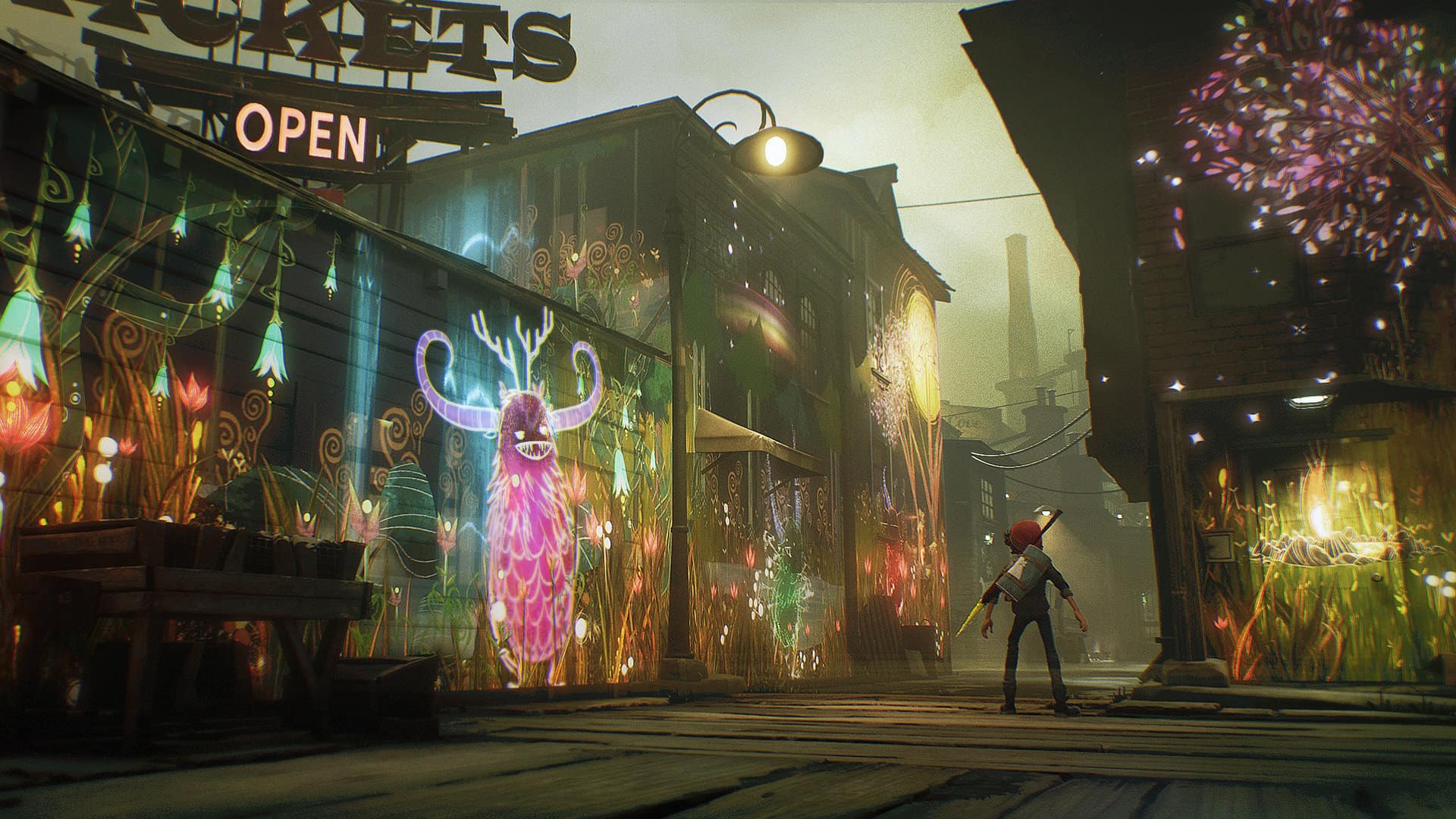 There are many things to admire about the Concrete Genie protagonist, Ash: a slightly ratty shirt that would cost top dollar from River Island; a slouch beanie that barely contains his Laurence Llewelyn-Bowen-like do; and a pair of Primark hi-tops that are just different enough to Chuck Taylors. The young lad knows the importance of aesthetics: he’s an artist. With his oversized paintbrush, the teen uses the abandoned fishing village of Denska as his canvas, splashing colour on its walls to restore its spirit. It’s a relatively big job, though; the boy can’t do this all by himself.

There are points in the world where Ash – with a sweep and a swoosh of his comically large brush – can bring magical creatures, called Genies, to life. And they’re adorable. These neon scribbles gargle and purr in appreciation at all of your compositions, but they do know what they especially like and aren’t shy when it comes to making requests. And if you want success on the ground, you better appeal to what lives on Denska’s walls. Thought bubbles appear over the heads of Genies, showing what they would like to see you paint next; if you meet their demands, they’ll aid you on your quest to revitalise the once glorious village. For example, some Genies can remove obstacles that are blocking your path, while others can power up electrical gates you need to pass through. These transactional friendships feel a bit contradictory to Concrete Genie’s nicey-nicey overall tone, but the conditional progression is certainly welcome.

Each district has a number of dulled lights that you must turn on, and once you’ve done that you move onto the next area, where you do the same. Your humongous paintbroom brightens bulbs, as it glides along stony walls, producing gorgeous, animated graffiti; at first, I was in awe. Premade designs of snapping venus fly traps, roaring fires, and glistening rainbows allow you to create spectacular moments. Your portfolio expands as you collect more designs that are floating around town, enabling you to paint even more elaborate works of art. It doesn’t matter, though. The lights aren’t like the needy Genies: the result of your strokes aren’t of concern. My pieces became more slapdash, as I realised what I created wouldn’t affect the lights’ luminosity. Sure, I could attempt a fridge-worthy doodle – and sometimes I did, just to break up the monotony – but often I’d select the nearest preset and scrub the walls just to move things on. The act of illumination is a tad dull, and I wanted to learn more of the bleak story. 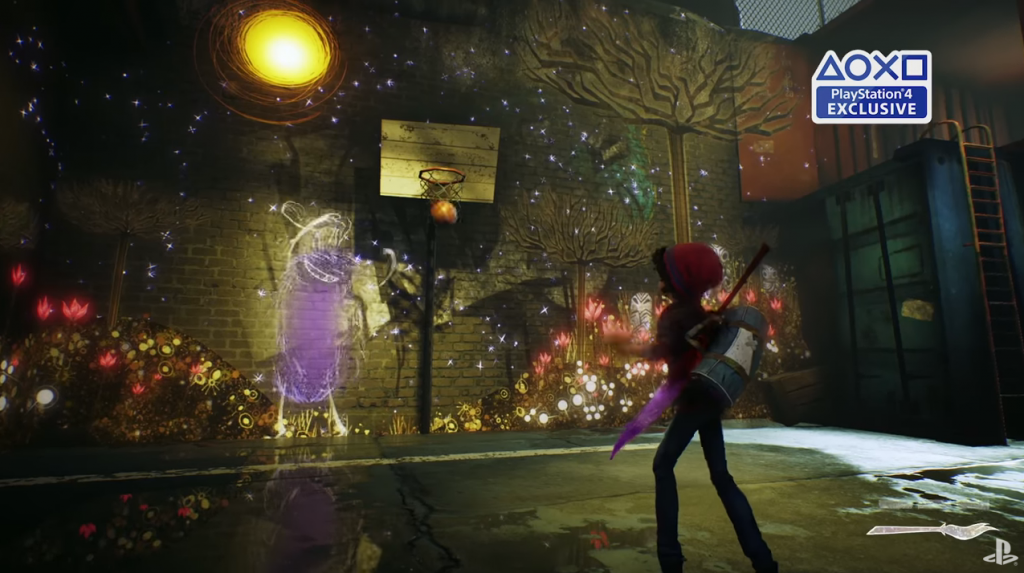 What happened to Denska, which is revealed through newspaper clippings dotted about place, is quite engaging. Pollution ruined a town that was flourishing and forced business owners and families to seek work elsewhere. These snippets ground the fantastical world that Ash and his band of glowy comrades inhabit in such a lovely way. The pre-teen may think they’re doing something important, like saving the world… or whatever, but their work is far greater, and more relatable: they’re rehabilitating a community that’s gone dark. There’s no greater example of this than the adolescents that try to hinder you: whilst posing about as much threat as an errant bristle, their backstories show, like the village they run roughshod over, that they, too, just need some TLC.

Giving the place a facelift – tiresome though it may eventually become – does showcase Concrete Genie’s beauty. Clear an area of doom and gloom and you see bulbs dance, like Christmas tree fairy lights stuck on the flicker setting; fluorescent particles drift along, grazing the dimly-lit Denska sky; and your creations, beaming with joy, breathe life into the humdrum red brick of the once thriving town. Cutscenes are equally as dazzling, with facial animations that utilise a stop-motion effect. In a medium so enthusiastic about realism, developer PixelOpus’ art style stands out. The bit where you can blast enemies with fireballs comes out of nowhere, though.

That last sentence, as jarring as you think it may have been, is nowhere near as harsh as Concrete Genie’s shift from pleasant art project to third-person shooter, towards the end. You get a health bar; a skating ability; powers: it’s just… weird. The inclusion isn’t peculiar – it’s actually a refreshing deviation – but the point at which it’s introduced is. Rather than a dramatic transformation, the game would’ve been better served if it introduced the action more gradually during the conclusion of particular chapters.

Still, there’s no better conduit for Concrete Genie’s message than Ash: he’s understanding of others’ troubles, brings people together, and really good at painting. He’s almost too good: because the world blossoms under his brushstrokes, regardless of what the finished product may be, the arrangement can suffer. But, the dichotomy of Denska’s grim reality versus the fantasy world the young boy creates does make for a stunning-looking disasterpiece.

At times, Concrete Genie can be a little too pleasant, which makes the action-packed conclusion really jarring. Still, the contrast between Ash's fantasy and his reality is truly stunning.
7 Beautiful artstyle The story of Denska Peculiar pacing 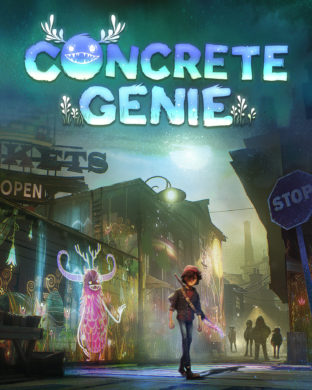