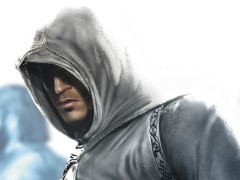 Late last year Assassin’s Creed divided opinion more than any other game in recent memory. While some hailed it as a true next-gen gaming experience, others felt it was little more than a simple gameplay concept wrapped in stunning visuals. Our opinion fell somewhere in-between, with the fairly repetitious gameplay being the main reason Assassin’s Creed isn’t the breathtaking experience it could have been. Some months later and with a smattering of new content the game has arrived on the PC, but is it any better for the additions?

Right up until its console release last year, the one thing that Ubisoft was sure not to reveal is the twist in the storyline. Although it’s now pretty well known, this review won’t spoil too many aspects for PC gamers coming fresh to the game, meaning you’re safe to read on unless you absolutely don’t want to know anything about the game prior to release. You play as Altair, an assassin who lived through the Third Crusade in 1191, but you don’t exclusively play as him – I’ll say no more.

The core goal is to restore your master’s faith in you as an assassin by carrying out nine assassinations, which take you across the Holy Land, to Damascus, Acre, Jerusalem and Maysaf – with Maysaf being your initial gateway to the rest of the game world. This is really just a brief outline of the game. The full storyline is far deeper, featuring the expected twists and revelations, plus some infrequent and rather unexpected gameplay that will likely polarize opinion.

One of the most impressive aspects of the game is its size. The three main cities are huge, split into three distinct districts and full of citizens, guards, speakers, thugs, merchant stands, buildings, and just about everything you’d expect to see in a city from that era. The streets are full of people, and by full I mean packed. The first time you see Maysaf your jaw will hit the floor due to the game’s beauty, but it’s not until you walk the streets of one of the three main cities that you’ll see what the game engine is really capable of. We’ve seen crowds in games before, but in Assassin’s Creed it’s been taken to a new level.

It’s not just cosmetic either, although why that’s the case needs a little explanation. When you enter a city you do so in order to find and assassinate a target. The process is practically the same throughout the game. Firstly you go to the Assassins Bureau in order to get some tips on where to look for clues about your target. You then head off into that area, which is usually in an area of the game map that’s lacking detail. In order to draw this information onto your in-game map you need to scale numerous view points, which in turn displays the location of investigations.

Investigations are essential to your preparation, with each assassination needing a handful of investigations before you can carry out the deed. It’s here that this so called Director’s Cut of the game differs from the console versions. Four new investigation missions have been added on top of eves dropping, pick pocketing, carrying out tasks for informants (collecting flags, stealth killing people) and interrogation (beating people up). While great in theory, Rooftop Races, Archer Assassinations, Assassin Escorts and Merchant Stand Destruction challenges aren’t hugely different to what console gamers did last year. Having more of these side missions to choose from helps reduce repetition slightly, but in the grand scheme of things they don’t add a great deal to the game.

All the time you have to be aware of the guards and your current social status. Act like a normal citizen and you’ll be fine, but act like a crazy man and the guards will get suspicious and start watching you. If your on-screen status starts flashing red it’s time to take a low profile, and if that red dot gets bigger it’s time to leg it. It’s here that the game’s huge number of citizens come into play. Imagine running through Oxford Street in London over your lunch hour, and you’ll get some idea of what trying to outrun guards in Assassin’s Creed is like – except you can take to the roofs.

Altair is highly agile, meaning he can leap from rooftop to rooftop, scale buildings and generally run across anything. When this works Assassin’s Creed is at its brilliant best, with the feeling of freedom being unlike anything I’ve played, but it sadly doesn’t always work as you want. Climbing can itself cause problems, with Altair often unwilling to lift himself up to a ledge that is clearly within reach. The guards are also great at throwing things at you, so you’ll often be moments from pulling yourself onto a rooftop and then fall off after being hit by a rock or arrow. It might be smart AI, but it makes for highly annoying gameplay.

It doesn’t help that the free-running aspect is a little hit and miss. Altair will run and jump in whichever direction you’re pointing, so if you accidentally point off a building that has nothing beyond it except for a huge drop, you’ll be falling – although it’s never to your death – and even when you do die, you usually don’t lose too much progress. On consoles part of the problem stemmed from the way free-running worked, with the control layout preventing you from manually controlling the camera while running. On the PC the camera is mapped to the mouse, so you don’t have the same issues. On the other hand, the general controls don’t feel quite as intuitive as they do on a controller, so many players might still prefer to opt for a Xbox 360 controller over mouse and keyboard.

Once you’ve escaped the guards and have the required info on your target you head back to the Bureau and you’re given the go-ahead to make the kill. It’s here that the game is perhaps the most disappointing, as the assassinations simply aren’t as diverse as I hoped they’d be. Once you make it to the sign-posted area an in-game cinematic kicks in, before you are left to take out your target. Try as I might, I simply wasn’t able to make stealth kills, resulting in the guards spotting me and being on my case.

Again, once you’ve completed the kill and watched the target speak about his actions, you must head to the Bureau to confirm the kill – only after you’ve shaken off the guards and returned your social status to normal. It’s then back to Maysaf to speak to your master, who gives you another target and handily upgrades your abilities and/or weapons. To begin with you’re rather limited, with little more than a sword and the robe you wear, but by the end you’ll be able to grab hold of ledges while falling, throw ninja-like blades and hold your own against a mob of enemies.

Combat in Assassin’s Creed is something I have mixed feelings about. It’s definitely not going to appeal to everyone, mainly down to the lack of skill required, but it serves its purpose and makes for great looking fights. You essentially have to rely on countering the attacks of your enemies, which when done correctly either knocks them to the ground for an easy kill or performs an instant kill in one of many bloody sequences. When you start your quest to kill the nine targets you’ll be worried about taking on guards (especially the harder to kill Templars) but soon you’ll be quite happy to face five or more, safe in the knowledge that you’ll be able to take them all out without too many problems.

And that is the game. While you get new targets and move to new locations in each city, what you do is essentially the same. Side missions come in the form of collecting hundreds of flags littered throughout the cities and free-roaming kingdom (which you can travel through by horse), scaling all the view points, and citizens can be helped out which in turn give you allies who will block pursuing guards, to help you escape.

As stunning as the game looks and as enthralled as I was by the story – which really is quite intriguing if you look for all the information – the game’s flaws are too hard to ignore. They mostly boil down to how the game seemingly goes out of its way to make things less fun than they should be. Escaping should be something Altair is highly skilled at, but guards are just about as agile, leaping from building to building after you. Time after time I was moments from taking shelter in some hay, in a roof garden or in the safety of a group of scholars, when a guard would spot me, and another lengthy pursuit would ensue – what should have been great fun quickly devolved into a chore.

While it looks utterly amazing, you’re going to need one monster PC in order to get it running smoothly with all the graphical bells and whistles turned on. If you do have such a machine then you’ll actually be playing the superior version, with the game holding a higher frame rate than on consoles and suffering from far less detail pop-up. PC gamers were treated to Crysis last year, but that in no way lessens the visual impact of Assassin’s Creed. The cities have been created with a stunning amount of detail and the views while atop tall spires are truly breathtaking.

Enemy AI is terribly erratic. They can chase you for minutes, but then you can walk behind one of them in a way so obvious a normal person would be highly suspicious of, and then stealth kill them from behind. Oh, and Altair, a man who is probably one of the most deadly characters ever to appear in a video game, dies when he hits water. Although people of the time might not have been able to swim, it’s still completely ridiculous.

And don’t get me started on the ending. This pretty much nailed the coffin shut on the game’s fate as a good but not stunning title. You’ll have to experience it for yourself, but it simply didn’t deliver what it should have. It left me wanting more, which Ubisoft may well see as job done, but gamers don’t buy games with the hope that they’re completed within the next few years; they want a conclusion straight away.

Assassin’s Creed should certainly be played by anyone who’s got a PC capable of getting the most out of the game’s superb visuals, but don’t expect to be playing something that will go down in history as one of the greatest games of all time. It’s ambitious and succeeds more than it fails, suggesting that one day Ubisoft Montréal will deliver the game it originally set out to make.

Assassin's Creed should certainly be played by anyone who's got a capable PC, but don't expect to be playing something that will go down in history as one of the greatest games of all time.
8 Stunning visuals Roaming the cities is great Controls can feel awkward at times Very repetitive