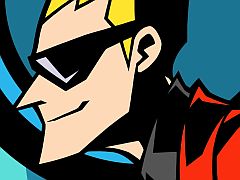 This review was originally published for the DS version of Ghost Trick, released in 2011. The iOS version of the game is identical in content. The controls have also been ported elegantly, though playing on the iPad adds a pixelated roughness to the character sprites. Ghost Trick iOS is available for free, but anything past chapter 2 must be purchased additionally in either three £2.99 bundles or one collected bundle for £6.99.

Designing a video game around the most tired of all narrative crutches – an amnesiac protagonist – is a beguiling decision. It’s almost guaranteed to have the critics scowling, so why do developers consistently do it? Still, it’s further proof of Shu Takumi’s creativity and imagination that Ghost Trick’s hero ultimately manages to succeed where so many foggy-brained characters have failed.

As the game’s title suggests, our hero is a ghost. Becoming conscious in the middle of a junkyard shortly after midnight, the crimson-suited, sunglasses-wearing and Jedward-styling Sissel realises he’s staring at his dead body. The amnesia is quickly explained: Sissel has been recently murdered, and the deceased seem to have a hard time remembering the specifics of their former lives.

With the friendly advice of a bouncing nearby lamp, Sissel learns that he’s inherited a cache of swanky supernatural abilities – his ghost tricks, if you will, which neatly ties the purpose of the game with its enigmatic title. He’s also told he’ll disappear from existence at dawn, which adds the requisite sprinkles of urgency to the tale.

Designed as a bridge between an interactive novel and an adventure game, Sissel finds himself able to possess and manipulate inanimate objects, zip around active phone lines and rewind time to four minutes before the death of any corpse he stumbles upon. These become the player’s toolbox for following the breadcrumb trail of mysteries to the game’s narrative payoff and the eventual reveal of Sissel’s lost memories.

The challenge, however, is often pitched a little on the simple side, with puzzles that generally offer only a single, self-explanatory solution. The necessary path in Sissel’s ghost world is clearly illuminated by comforting blue dots, and it’s a breeze to zig-zag from one object to the next to see which support further interaction. Here you switch back to the regular world and perform a ‘trick’, manipulating the object to modify the environment and open up further paths – for instance, umbrellas can be opened, fountains happily spout water and ceiling fans are begging to spin faster.

Nothing in Ghost Trick’s world is thrown away, and the whole game is crafted out of a deliciously sparse economy where each piece of the puzzle plays its role in telling the overall tale. There’s absolutely no wastage, with no clumsy filler chapters or piles of useless trinkets designed to add artificial length to your progression, and while this all combines to make a particularly taut thriller it comes with a heavy price. While there’s a constant sense of enjoyment, there’s never the definitive ‘Take That!’ moment of the Phoenix Wright series.

The majority of the game is using your tricks to move between two points. Sissel only has a very limited reach, and therefore can only move when there’s a trail of objects scattered nearby. His other abilities are reserved solely to advance the narrative – phone lines are used to progress to the next area, and rewinding time only works when the game wants to trigger a timed sequence where you avert a death, usually that of redheaded rookie detective (and unwitting sidekick) Lynne.

These timed sections are Ghost Trick’s gamiest moments, where objects have to be tricked in specific orders and at exact times to be successful. Fail and you can simply rewind the clock again, but having to replay certain sections a handful of times, while listening to the same lines of dialogue repeated over and over, can add an unwanted touch of frustration.

When written down it can be quite a lot to take in – the kind of meandering, conceit-driven game that makes for pages of dry exposition. But while Ghost Trick essentially defines its own set of rules, it’s further proof of the carefully and competently written narrative that the player never feels lost in each new twist or trick.

Supernatural abilities make up less than half the game, however, with the real meat of the experience coming from the endless reams of text that make up much of Sissel’s 18-level adventure. Here Capcom’s localisation team deserve a nod for a sterling job, with an adeptly translated script that gleefully bounces off the screen and reads like the entire thing could have easily been written natively in English.

The delivery of the text is also blissfully married to the game’s beautiful presentation. Compare it to something of a similar vein – Chunsoft’s entertaining but deeply flawed 999, for instance – and it’s clearly raising the bar for the whole genre. The buttery smooth animation of the characters hearkens back to the rotoscoping phenomenon in the 90s, and it’s probably the only game I’ve ever played where a character walking down the stairs actually forced me to laugh out loud.

Without wanting to delve into specifics, however, the telling of Ghost Trick’s story is more competent than the actual story itself. The ultimate twist is more than a little unsatisfactory, though it is nicely integrated into the game.

Few members of the cast make themselves as lovable and endearing as Phoenix Wright and his assorted company, but the range of personalities are not without their fair share of charm – dandyish Inspector Cabanela and determined pooch Missile are the standout highlights. Despite the disappointing finale, my cold ice heart warmed slightly at the game’s closing shot and the story deserves bonus points for not leaving things wide-open for a sequel.

As a whole, though, it’s an elegantly crafted thriller that stands out as an original, charming and beautiful adventure. As an experience it’s well worth the price of admission, but sadly Ghost Trick lets itself down with its overall simplicity and the disappointment of its crucial final act.

Ghost Trick is well worth the price of admission, but sadly the game lets itself down with its overall simplicity and the disappointment of its crucial final act.
7 Beautiful animation Good iOS port Too easy Disappointing twist