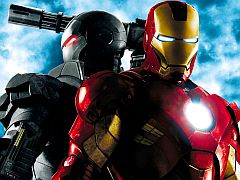 If there’s one thing I can safely predict was missing from the development of Iron Man 2 on the iPhone, it’s quality assurance. Either that or Gameloft’s QA team were testing the game blindfolded. Iron Man 2 is a horrendous mess of invisible walls, pop ups, graphical glitches and peculiar design choices. Take a glance at a couple of screenshots and you’d be forgiven for thinking the game was half competent, but underneath that thick layer of polish that Gameloft lavishes on all their games is a broken and fundamentally flawed release.

Ignoring the infinitude of problems for just one moment, there’s a couple of compliments I’m happy to throw the game’s way. For one, the control scheme works well and has been mapped to the iPhone’s touch screen with great success. The layout is exactly as you might expect; a virtual analogue stick residing in the left-hand corner of the screen and action buttons on the right – a setup that’s quickly becoming standard for iPhone games of this ilk.

An icon above the action buttons activates Iron Man’s thrusters, and can be slid up and down to adjust his height respective to the environment. While hovering, a third movement mode becomes available, allowing Iron Man to jet about the more open environments in flight mode. This actually proves to be one of the most entertaining aspects of the game, and handles surprisingly well given the device’s touch screen limitations.

The game looks nice enough too, but unfortunately only in screenshots. In action comes complete with every kind of graphical glitch you can think of. The pop up is perhaps the worst offender, with objects popping into view from even the closest of distances. Invisible walls are equally as frustrating, preventing Iron Man getting from A to B with alarming frequency. Strangely, this problem is often dependent on which flight mode you happen to be in, meaning the wall might disappear if you choose to walk rather than fly.

Graphical blunders such as these might be annoying, but they don’t ruin the gameplay in any fundamental way. Class A showstopper bugs, as they’re affectionately known to QA teams, do, however. Alongside a slew of ultimately harmless graphical glitches, some fairly game breaking bugs have managed to sneak their way into the game too. For example, in certain levels you have to defeat a set number of enemies in order to continue, but often not enough enemies will spawn, meaning that you’ll be wandering around an environment trying to find the non-existent buggers as a timer counts down to an inevitable game over screen.

Other problems aren’t game breaking as such, but are so infuriating that they might as well be. In the Somalian jungle level, Iron Man is tasked with finding a ‘controller’ that he has rather foolishly dropped on his flight in. This particular objective is explained after reaching a new area of the map, and so one would naturally assume that the object would be in this area. For some mind-boggling reason, it’s not. The game forces you to backtrack to a previous area to find said item, at which point (if you’re anything like me) you will have already wasted a good half an hour combing every inch of the area it would most logically be in. It’s a fascinatingly obscure design choice, and honestly makes me question my faith in an otherwise talented developer.

If you manage to endure the plethora of obstacles that stand in the way of progression, another problem rears its ugly head: first degree boredom. Minute-to-minute gameplay is a simple case of moving from one waypoint to another, fighting the same enemies with the same weapons along the way. You don’t even have to take your finger off the fire button if you don’t want to, with an automatic targeting system that shifts from target to target every time you defeat an enemy. It’s like the game’s playing on autopilot at times, which results in a very uninvolving and tiresome experience.

Like it’s big brother on the 360 and PS3 (which you can read my review of here, the iPhone version integrates role playing mechanics to help give the illusion of progression. Illusion is the key word here, as suit upgrades don’t really have much of an impact on gameplay. Still, it’s nice that Gameloft has tried, and to the eyes of the less analytical App Store audience, the game appears deep and rewarding. Other than this (and the odd occasion to play as War Machine), there’s not a lot that stands out about Iron Man 2, and the experience as a whole is entirely forgettable.

There's not a lot that stands out about Iron Man 2, and the experience as a whole is entirely forgettable.
4 Controls work well Decent character models and environments Linear and repetitive Glitches galore

Video game based on the motion picture sequel.

Video game based on the motion picture sequel.