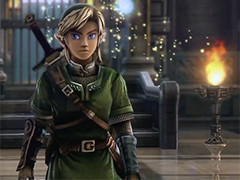 Nintendo will reveal more information on the upcoming Legend of Zelda Wii U title at next year’s E3, Zelda boss Eiji Aonuma has teased.

Aonuma discussed the reveal in an interview with Mashable, where he said he would reveal more about the title at next year’s show.

Zelda Wii U could be Nintendo’s major reveal for the show, which takes place between June 10 and June 12, 2014, although it still isn’t known whether the platform holder will be returning to the event to host a press conference. This year it chose to broadcast an episode of Nintendo Direct detailing its major announcements.

Little is known about Aonuma’s Wii U Zelda, but a tech demo released alongside the Wii U’s announcement could offer some clues as to what to expect.

The Legend of Zelda: Wind Waker HD, an HD re-release of the GameCube original, released on Wii U earlier this month. The game is said to have contributed to the Wii U’s 685 per cent sales spike.