With all types of systems being treated to this unique experience, players are now wondering whether the game will also be available on Game Pass. Luckily, we’re here to answer that question for you by telling you all that we know about this title’s inclusion in Microsoft’s subscription service.

Is Monster Hunter Rise going to be on Game Pass?

Monster Hunter Rise is now available for both Xbox and PC Game Pass. It was released on January 19, 2023 at 9 PM PT and on January 20, 2023 at 12 AM ET / 5 AM GMT. It was also launched at the same time as the console releases so no platform player has been left out during its launch.

According to an official Xbox announcement, you’ll also be able to play this title on-the-go through the Game Pass Cloud and on the PC version of the service too.

Additionally, its expansion MH Rise: Sunbreak will also be introduced to all of the same systems albeit at a later date.

NOW READ: A Monster Hunter Mobile game is on the way from Capcom and Tencent

Aside from new creatures, this entry has plenty of differences with that of the similarly popular MH World.

Palamutes and Cohoots are some of the more significant additions to Rise in terms of companions. The former has the ability to accompany players in multiplayer. It can also be used in combat and as a means of transportation. On the other hand, the latter serves as a scout that allows you to see more of the map.

If you want to find out more about the upcoming release, you can check out the announcement trailer below:

With the game finally here, MH Rise can now be played on all platforms including PS4, PS5, Xbox Series X|S, and Xbox One. 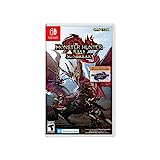 Yes, MH Rise is now available on the Xbox Series X|S and the Xbox One.

What time will MH Rise be on Game Pass?