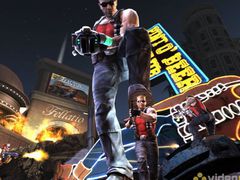 Take-Two’s Duke Nukem Forever has stormed to the top of the All Formats All Prices UK video game chart, some 14 years after the game was announced. 56 per cent of sales were recorded on Xbox 360, 30 per cent on PS3 and 14 per cent on PC.

The Gearbox developed shooter managed to knock fellow Take-Two hit LA Noire down to No.2. Meanwhile, a climbing Zumba Fitness meant inFamous 2 had to settle for fourth place – one place higher than the original managed two years back.

5. LEGO PIRATES OF THE CARIBBEAN

After such a troubled development, which traversed three decades, it’s great to see Duke Nukem Forever claim the top spot – even if the finished game isn’t much cop. We expect a massive drop-off in week two, however.

Friday week sees the launch of The Legend of Zelda: The Ocarina of Time 3D and Child of Eden, two potentially must have games for the 3DS and Kinect respectively. Top 10 entries seem likely. EA’s Alice: Madness Returns and Square Enix’s Dungeon Siege 3 could also chart inside the Top 20.