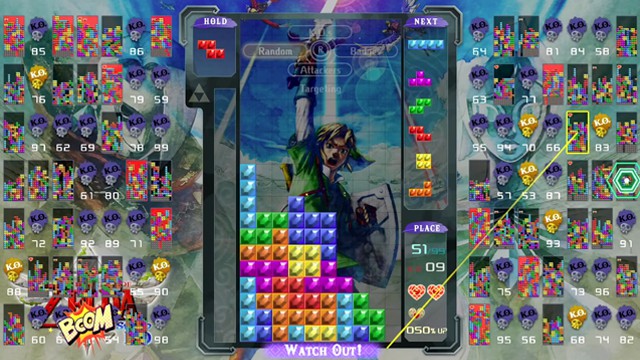 Nintendo has announced the latest Grand Prix event for free-to-play Tetris 99 as a crossover with The Legend of Zelda: Skyward Sword HD.

Kicking off from this Friday, August 6 players will be able to take part in the 23rd(!) Grand Prix event. As usual, players will be granted a number of points depending on how high they finish. The higher they finish, the more points they get. Once you’ve accumulated 100 points or more, you’ll get to keep the special theme based on the recent release of The Legend of Zelda: Skyward Sword HD.

The theme includes a specific board featuring artwork from the game, music, Tetris blocks and iconography. It’s the latest in many crossover events the free-to-play battle royale Tetris outing has had since its release in 2019. These have included tie-ins with Luigi’s Mansion 3, Animal Crossing: New Horizons and many, many more.

The Legend of Zelda: Skyward Sword HD of course launched on Nintendo Switch last month, and you can find out what Josh thought of the re-release in his review over here. He says: “Oddly enough, with the motion controls waved away, the game becomes more, not less, about controlling motion. You have a strange relationship to the world, touching, tipping, and slicing it from new angles.”

Tetris 99‘s The Legend of Zelda: Skyward Sword HD Grand Prix event runs from Friday, August 6 through until August 10. Check out a trailer for the Grand Prix below.