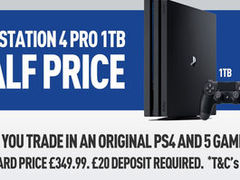 PS4 users looking to upgrade to a PS4 Pro will be able to get their hands on the new console for half price when trading in at GAME, the retailer has revealed.

You’ll have to pick one up during the console’s first week of launch to take advantage of the offer, though: the deal is only valid from November 10 through to November 16. You’ll also be required to pay a £20 deposit to secure one.

PS4 Pro launches in the UK on Thursday, November 10, and includes an improved GPU and a faster CPU, allowing some games to render at a native 4K resolution. All existing PS4 games will remain compatible with the new console.