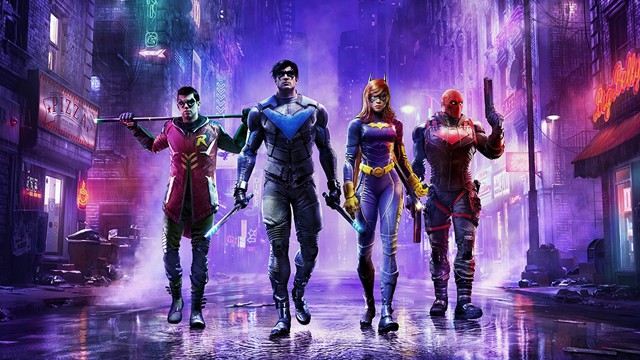 Updated on September 3, 2021 by Ben Borthwick

Warner Bros Games and DC have released some new official art for the upcoming Gotham Knights, teasing the game’s appearance at DC Fandome next month.

The artwork shows our four heroes: Batgirl, Nightwing, Red Hood and Robin striding through the neon-lit, rain soaked streets of Gotham City. The artwork also comes along with a promise that the game will be showing off some “new content” during the livestream on October 16.

Gotham Knights was first announced last August. Promising a “living, breathing Gotham City” the game takes place after the events of Batman: Arkham Knight. Batman is (spoilers for that game) dead, so the four heroes are trying to clean up the city in his absence. It can be played solo or with a second player in drop-in, drop-out co-op. Each character will have their own playstyle, and also get use of the Batcycle.

We’ll see more of the game when the DC Fandom starts at 6pm UK time on Saturday, October 16 where we’ll also get to see more of Suicide Squad: Kill the Justice League. Get your eyes on the new Gotham Knights art below. The game launches in 2022 for Xbox Series X|S, Xbox One, PlayStation 5, PlayStation 4 and PC.

Your Legacy Begins Now. Step Into the Knight. #GothamKnights pic.twitter.com/XGb8hLaHl9