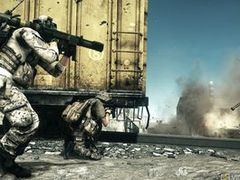 Battlefield 3: Back to Karkand DLC dated for December 6

Battlefield 3’s Back to Karkand DLC, which contains four classic Battlefield maps remade in the Frostbite 2.0 engine, will be released for PS3 on Tuesday December 6.

All Battlefield 3 DLC is released a week early on PS3, which means Xbox 360 and PC owners won’t be able to access it until December 13.

The four maps are Wake Island (Wake Island!), Sharqi Peninsula, Gulf of Oman, and Strike at Karkand, and DICE has claimed each contains more destructible terrain than the nine existing Battlefield 3 maps. The DLC also contains three new vehicles – the VSTOL fighter jet, Desert Buggy, and an APC – and ten new weapons that can be used across all multiplayer maps.

New weapons will be unlocked via a series of in-game challenges that DICE is dubbing Assignments. The first Assignment – Let it Rain – requires you to get 20 kills with the LMG and then two kills with a mortar, and upon completion unlocks the next Assignment in the series.

Back to Karkand is free for anyone who purchased the Limited Edition of Battlefield 3, or costs $14.99/1200 Microsoft Points. No UK price has been announced, but expect to pay about £10.