How To Evolve Dunsparce Into Dudunsparce In Pokémon Scarlet and Violet 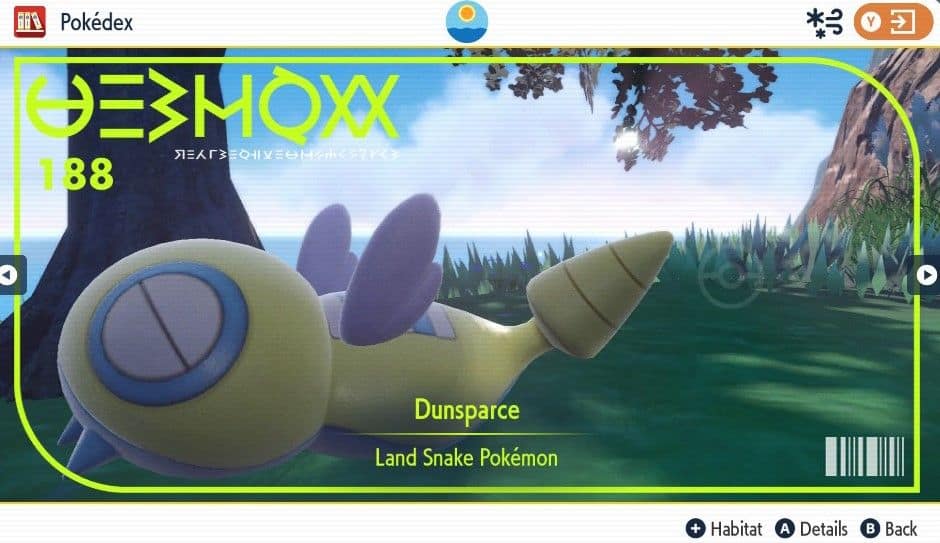 Updated on January 22, 2023 by VideoGamer.com Staff

Dunsparce has been a fan-favorite Normal-type pokemon for ages who has finally received an evolution and can now be turned into a Dudunsparce in Pokémon Scarlet and Violet. As unanticipated as this was, the news has left Trainers eager to find out what new this change has to offer.

Normal-type Pokémon, like Dunsparce, often suffer greatly due to being vulnerable to a number of other Pokémon types in the game. However, while evolving your Dunsparce into Dudunsparce won’t be changing its type, it will be granting the Pokémon effective stats to stand its ground in battle.

So, if you’re wondering how you can evolve your baby Dunsparce into Dudunsparce, keep on reading!

How To Evolve Dunsparce in Pokémon Scarlet and Violet

Dunsparce, like certain Pokémon, has specific requirements for turning into a Dudunsparce, which can’t be done by merely leveling it up. To evolve your Dunsparce into Dudunsparce, you’ll need to teach it the move “Hyper Drill”.

NOW READ: How to evolve Chewtle into Drednaw in Pokémon Scarlet and Violet

The idea of the “Hyper Drill” ability aligns with the fact that this Pokémon has a drill for its tail. If you spot one, be sure to catch it quickly because it will dig into the ground with its tail and flee!

That said, before diving into the evolution steps, you need to get your hands on a baby Dunsparce. Fortunately, there are a plethora of locations where this little Pokémon can be found.

Where To Find a Dunsparce In Pokémon Scarlet and Violet

Dunsparce has a fairly frequent occurrence across the vast region of Paldea. The following are its common spawn locations:

Though you can find one very easily at these locations, if you really want to be sure to catch one on your trip, you can take a Master BLT sandwich with you to increase your encounters against Normal-type Pokémon. Now that you have a Dunsparce, let’s get it ready for the evolution process!

Evolving A Dunsparce Into A Dudunsparce in Pokémon Scarlet and Violet

A Dudunsparce can’t be caught from the wild and can only be obtained through evolution. Luckily, a Dunsparce appears quite frequently throughout the map and can be acquired very easily, allowing you to get your hands on a Dudunsparce through evolution fairly quickly. In the case of a Dunsparce, you only need to teach it the “Hyper Drill” skill and level it up once to trigger its evolution into Dudunsparce.

That said, you should keep in mind that the evolution will only take place if your Dunsparce has the “Hyper Drill” move in its skillset. So you’ll have to relearn Hyper Drill if it no longer has it or never had it in the first place. The good news is it’s quite easy to relearn a skill for any Pokémon.

How To Teach Hyper Drill To Your Dunsparce

Your Dunsparce will automatically acquire Hyper Drill once it levels up to level 32. In case your Move List is full, the game will prompt you to replace a current skill with Hyper Drill. Similarly, if your Pokémon unlocks a move by leveling up after an auto battle, the game doesn’t ask players if they want to learn that move which is quite unfortunate.

NOW READ: How To Evolve Every Pokemon in Pokemon Scarlet And Violet – Special Evolutions Guide (2022)

Stats Comparison Between Dunsparce And Dudunsparce

With all the evolution tips out of the way, you’ll be thinking if it’s even worth the hassle to evolve your Dunsparce into Dudunsparce. While Dunsparce isn’t a viable option for battling other Pokémon, Dudunsparce proves to be a worthwhile investment of effort. It has better stats in comparison to Dunsparce that prove to be handy against any opponents.

NOW READ: How To Trade In Pokemon Scarlet and Violet

Below is a comparison table between the stats of both Pokémon to help you evaluate and decide what to do next with your Dunsparce:

The above data shows clearly how well a Dudunsparce can perform with its physical abilities with decent Attack and Defense stats while having adequate Special Attack and Special Defense.

NOW READ: Which Path Should I Do First In Pokemon Scarlet And Violet? Victory Road, Path Of Legends or Starfall Street

While it has decent overall stats, it should be kept in mind that Normal-types are vulnerable to Fighting Types, and it would be wise not to pit your Dudunsparce against one.

Trainers might start to wonder if they want to make the unusual decision of adding a Dudunsparce to their party. While its battle effectiveness, in general, might still be in question, its utility may be helpful with your team composition. Let us know what you think!