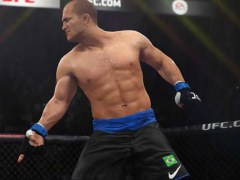 UFC brings the world’s best martial artists together to compete on a stage that looks to combine the most effective disciplines to devastating effect. Naturally, EA Sports UFC is a pretty complicated game with many different factors in play at any one time. To help get you started, here’s some tips and tricks to help give you the advantage against any opponent.

Getting off the mat

If you’re a fighter who’s far better in the stand-up game, or fighting an opponent who can be lethal on the ground, try your best to get the fight back to a stand-up contest as quickly as possible.

Work in the clinch

Punches, knees and kicks from the clinch can deal devastating damage in just a few blows. If you tie up, make sure you land as many hits as possible and stop any transitions that would lead to double underhooks for your opponent, or worse, the Thai clinch.

If you’re looking to transition yourself, the Thai clinch is the best for landing a flurry of punishing knees and elbows. Rotate the grapple stick counter clockwise to move towards the Thai clinch, and be sure not to overdo it and wind up attempting to take your opponent’s back.

Keep an eye on stamina

Every fighter in the game will tire after delivering a flurry of hits, which leaves you vulnerable to counters and takedowns.

Keep an eye on your stamina gauge, especially when in a close-range fight with your opponent; knowing when to step back and take a breather is important to avoid being caught with a quick K/O or easy takedown. You’re punches will also become easier to block when tired, so step in, throw a few hits, then step out to recover and repeat.

Spacing is also a very important part of defence. Knowing the range of your opponent’s basic punches and kicks, and equally knowing the length of your own fighter. Being able to step out of the way of a strike and jump back in with one of your own is an important tactic to deal damage and avoid taking too much on your way to a win.

Counters do far more damage than regular hits, so try and land as many as you can throughout a fight. Hold a punch or kick button along with block to defend high or low and stand a chance to counter strikes to that region. Exhausted fighters show much more clearly where they’re about to hit, making them easier to counter, so be mindful of this in a fight.

Also, don’t always counter to the same area, as a fighters quickly recover from a parry and you need to vary up the strikes in order to make the most of the opportunity.

When approaching an opponent, be it at the start of a round of following a separation, don’t simply walk straight towards them. Sidesteps and lunging attacks are important to make yourself a difficult target to hit on the way in, and giving yourself the advantage during the early part of exchanges.

The Superman punch is a really effective punch to open with, as it’s a very well disguised strike and covers a good distance.

When mounted, you need to make a more advanced transition in order to get back to half guard. Simply rotating the grapple stick will give up your back, but holding L1/LT will make an attempt to push your opponent’s leg away and keep your back to the canvas, avoiding the threat of a choke submission.

Don’t constantly try and change position the minute you hit the mat, either. Again, stamina is important to increase your chances of performing a successful sweep or advancing through a fighter’s guard.