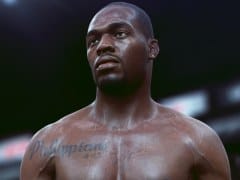 UFC could have been something special. The promotion is a goldmine of content with an incredible roster and a rich history. So why is this game so threadbare?

For starters, this is an arcade fighter wrapped around the rules of the Octagon – that’s a good thing. Much in the same way that Fight Night Round 3 didn’t follow the flow of a boxing match, UFC is more of a slobberknocker than its real-world counterpart, taking a liberal interpretation of ‘punches in bunches’.

This is entertaining for the most part, except when the fight hits the mat. Here it becomes a torrid mess of right-stick swirling, with all the strategy of a bar brawl. The amount of transitions is absurd, featuring reversals and full mounts every few seconds. I don’t know why EA changed the mechanics from MMA, but UFC fails to explain its intricacies and basic mechanics leading to a lot of initial guesswork followed by trial and error.

The other real issue is the lack of content. Granted, the roster is big, but this is only fun if you have a lot of things to do with them. A fighting game should offer WWE-levels of customisation and creativity, and this lacks anything of the sort.

In the Fight Night series, I had Michael Jackson fight Gandhi for the title, but here, unless you want to create generic white/black/hispanic/asian fighter, you’re out of luck outside of GameFace. Furthermore, despite having the women’s bantamweight division, you can’t create a female fighter in career mode. There doesn’t seem to be any way to download other player’s creations either.

Finally there’s the modes, or more specifically, lack of. There’s no Create-A-Tournament or Pay-Per-View: just quick fight, online, career and more tutorials in the form of challenges. Imagine FIFA with only quick match – it gets old fast.

UFC is simply OK when it should have been great. Considering how long it’s been in development, and the breadth of content at EA’s disposal, I can’t help but be disappointed by what’s on offer.