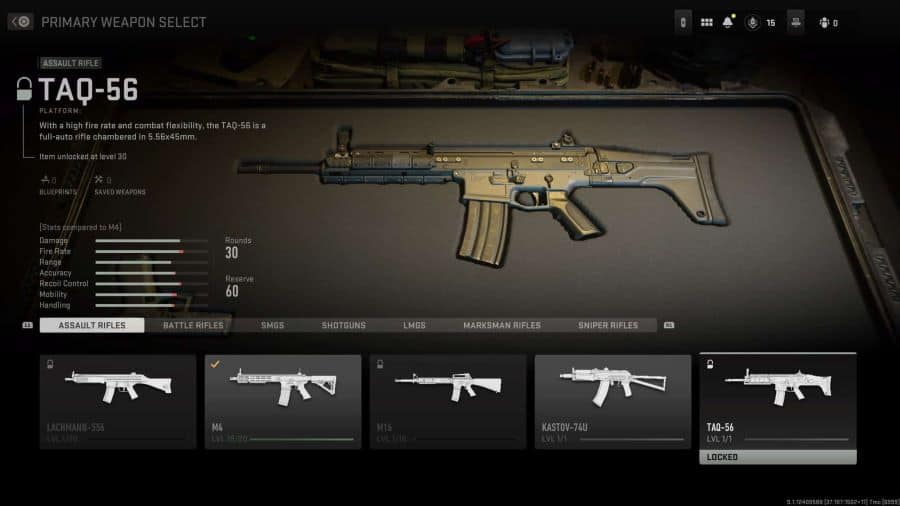 A fast-firing full auto assault rifle, the TAQ-56 is an incredible tool for dealing damage and downing foes in Modern Warfare 2.

While the Assault Rifle field isn’t lacking for competition, the TAQ-56 makes space for itself with its high rate of fire and damage potential, without taking too much of a hit to recoil control in the process.

We’ll help you maximize the TAQ-56’s strengths with our Modern Warfare 2 loadout guide.

The TAQ-56 performs exactly as a good Assault Rifle should in Modern Warfare 2. This is a rapid-fire, stable shooter, able to deal some real damage at all ranges. And its recoil control is surprisingly excellent too, making the TAQ-56 easy to keep under control.

It takes a while to unlock in Modern Warfare 2’s progression system for a reason, the TAQ-56 would easily outclass many other Modern Warfare 2 options if it were accessible right from the off. With its lack of obvious drawbacks, the TAQ-56 will be right at home as the centerpiece of most loadouts.

Modern Warfare 2 – Best Perks to Equip With the TAQ-56

The TAQ-56 will enable you to quickly rack up kills, and Hardline will allow you to really feel the impact of that. Reducing the number of kills it takes to activate Killstreaks ensures that you always have an advantage over the opposing team.

While the Heartbeat Sensor cannot be used constantly, its brief bursts of activity are still some of the most effective information-gathering you can get in Modern Warfare 2. Nearby enemies will have an extremely hard time remaining hidden with the Heartbeat Sensor in play.

If you’re going to stay alive long enough to activate your most powerful killstreaks, sometimes a fast-acting source of healing is required. The Medical Syringe will heal you back up to your maximum health in just a couple of seconds, potentially saving your life and keeping you in the fight for longer.

An excellent option for mobility that prevents you from being locked down in one spot for two long, essential for MW2’s fast-paced, deadly firefights.

A needed stability boost to allow you to keep your shots directly on target.

Modern Warfare 2 – Best Weapons to Pair With the TAQ-56

Though the Lachmann Sub is less powerful than at the beginning of Modern Warfare 2’s Beta, it is still a force to be reckoned with. Equipping the Lachmann Sub along with the Taq-56 will give you two accurate, damaging options that perform well at most all ranges. Even if ammo is scarce for one, you’ll be able to swap right into another intimidating weapon straight away.

Less rapid-fire, more precision shooting. The Lockwood MK2 deals tremendous damage in its single shots. Its long-range capabilities are excellent, though you may wish to switch back to the TAQ-56 when opponents are closing in.

While the Lockwood MK2’s limited clip size may pose a problem, the TAQ-56 itself should have bullets to spare, so resource scarcity is rarely an issue.

What Is The Best TAQ-56 Loadout In Modern Warfare 2?

The TAQ-56 is unlocked in a straightforward manner in Modern Warfare 2. Simply reach level 30 to unlock this powerful weapon.