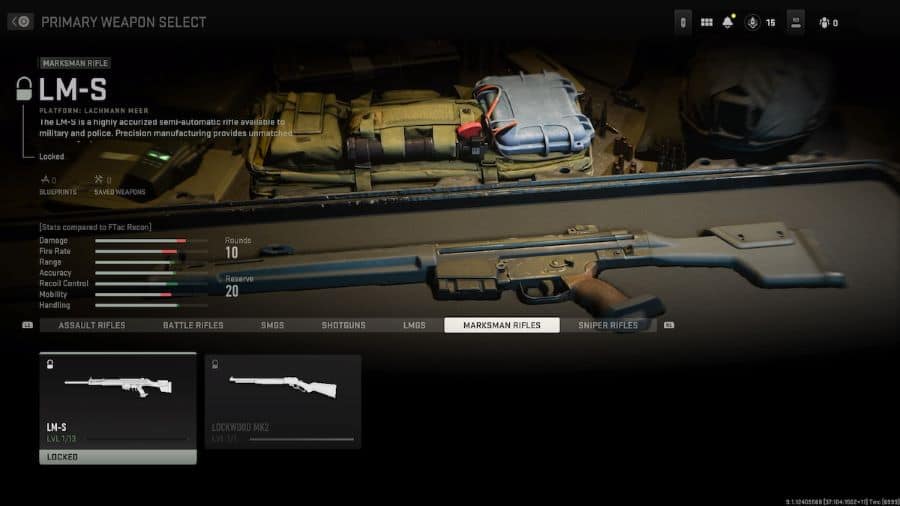 The LM-S is a strong contender for the best Marksman Rifle in Modern Warfare 2, beating out the Lockwood MK2 thanks to its incredibly accurate semi-auto fire.

Taking advantage of Modern Warfare 2’s speedy TTK, the LM-S can rapidly take down your opponents at ranges they’ll struggle to have an answer to.

We’ll help you capitalize on the LM-S’ strengths and build an incredible loadout with our Modern Warfare 2 guide.

Marksmen Rifles are leagues ahead of most of the competition when it comes to high damage at long range, and the LM-S is the best of the bunch. The Lockwood MK2 deliver single-shot damage at a reliable rate, but the LM-S semi-auto fire is an incredible tool that cannot be ignored.

Most other weapons that perform well at this range are relegated to single shots with lengthy pauses between those shots, so the LM-S has an immediate leg-up on the competition.

When using the LM-S in Modern Warfare 2, you’ll want to remain aware of your surroundings and ensure that opponents aren’t sneaking up on you. The LM-S will allow you to cover the field at mind-long range, so minimizing enemy chances of overpowering you at close range is a must.

Modern Warfare 2 – Best Perks to Equip With the LM-S

The Quick Fix perk will allow you to play aggressively without worrying about your survivability, adding more flexibility to your toolkit. Taking out enemies causes your health regen to instantly activate, allowing you to stay alive for much longer and work towards Killstreaks.

The Survivor perk is another option that increases your sticking power, granting a last-stand mode that comes with a single self-revive option per life. And unlike Quick Fix, Survivor benefits the whole squad, allowing your teammates to revive downed allies at a much faster rate than normal.

The Heartbeat sensor allows you to mitigate the LM-S’ dwindling performance at close range, being alerted to enemies moving in on your position. With semi-regular use, the heartbeat monitor will grant you a huge amount of information about your environment and any opponents attempting to get the drop on you.

Using C4 with the LM-S grants you an additional tool for defense and area denial, enabling you to lock down approaches to your position and lure enemies into traps. Remote Detonation allows you to fortify your position and scatter the opposition the moment they step into the C4’s proximity. With careful timing, C4 can be an incredible explosive option for your loadout.

Stabilizing the LM-S’ recoil allows for accurate bursts at ranges few other weapons can reliably match.

Modern Warfare 2 – Best Weapons to Pair With the LM-S

A reliable option that won’t require investing in the Overkill perk. The X13 Auto is an excellent, lightweight handgun with surprising velocity. It won’t be winning any prizes for long-range fire, but that’s where the LM-S excels regardless.

The Kastov is one of Modern Warfare 2’s premier short-range tools. This Assault Rifle will serve as excellent backup the moment you are forced into any close-up engagements, and its incredible rate of fire will quickly chew through the opposition.

What Is the Best LM-S Loadout in Modern Warfare 2?

How to Unlock the LM-S in Modern Warfare 2