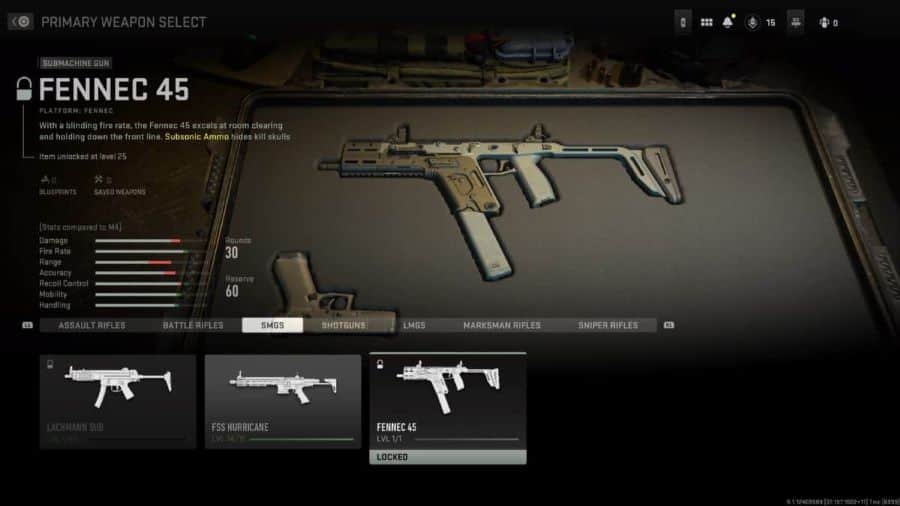 The Fennec 45 is a very unique gun in Call of Duty: Modern Warfare 2. It may not possess the stopping power of other SMGs like the FSS Hurricane, the Fennec 45 has interesting properties all its own.

The Fennec 45 may need some fine-tuning to stand out in a very powerful weapon class, but that’s what we’re here for. We’ll help you adjust your Fennec 45 loadout to get the absolute best out of this tricky SMG.

The Lachmann Sub was initially the clear winner in terms of SMG power in Modern Warfare 2. The FSS Hurricane wasn’t far behind, sadly relegating the Fennec 45 to a distant third. But since the Lachmann Sub has received a nerf to its overwhelming power, the Fennec 45 may well prove a more attractive option.

What sets the Fennec 45 apart from other SMGs in Modern Warfare 2 is its built-in stealth capabilities. The Fennec comes with Subsonic Ammo that hides kill skulls from the opposing team. This ability to go incognito restricts opponents’ access to key information, an attractive prospect for a gun that excels at getting the drop on enemies and delivering quick bursts of deadly fire.

Modern Warfare 2 – Best Perks to Equip With the Fennec 45

Since the Fennec 45’s Subsonic Ammo already gives it an inherent advantage to playing stealthily, perks like Cold-Blooded are a natural fit. Being invisible to AI Targeting, thermal and many other forms of reconnaissance makes you a terrifying, unseen force on the battlefield.

While the Fennec 45 is very useful in specific circumstances, it’s perhaps a little too niche for its own good. While attachments can certainly help to boost its initially underwhelming firepower and range, it’s still wise to carry a second primary firearm along with the Fennec, as it is often somewhat underpowered in all-out firefights.

It can never hurt to take along some extra ordinance in a Fennec 45 loadout, and the Stun Grenade is an excellent option for slowing and disabling opponents. Whether as a buffer for making a retreat or a destabilizing option to help you pick foes off, there are few situations where the stun grenade isn’t useful.

The Molotov is an excellent explosive option that will cause an incendiary burst in a large area when thrown. With careful aiming, the Molotov can prove a deadly combination with the Fennec 45, igniting enemies and swiftly picking off any that remain.

Once we’ve had time to test out the full range of attachments for the Fennec 45, we’ll let you know the absolute best ones to add to your loadouts.

Modern Warfare 2 – Best Weapons To Pair With The Fennec 45

The Fennec 45 excels in close range when catching the enemy off-guard, but its efficacy dwindles in more even circumstances. Taking the Expedite 12 into a match guarantees that you’ll dominate the field at close range, blowing opponents away with little effort.

The Lockwood MK2 is a fantastic mid-long range option, with devastating single shots that can help you pick off enemies from afar. As the Fennec’s distance game can leave something to be desired, the Lockwood MK2 helps to even out the loadout and improve your chances overall.

What Is the Best Fennec 45 Loadout in Modern Warfare 2?

How To Unlock The Fennec 45?

The Fennec 45 does not require progressing through the ranks of another gun to unlock. Simply focus on your overall progress in Modern Warfare 2, and once you hit level 25, the Fennec 45 will be available for you to use.