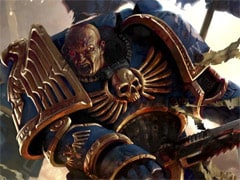 We talk a lot about cameras in videogames. So we should. Your point of view and your ability to see enemies from varied angles is crucial in all games. When it doesn’t work well, when it gets stuck, disorients or suffers from epileptic fits, it can ruin everything. You know what’s coming next. The camera in Warhammer 40k: Squad Command spoils what would otherwise be a solid and enjoyable turn-based strategy game.

For the uninitiated, Warhammer 40k is a tabletop fantasy game which sees grown men paint little model marines and roll dice at each other. It can usually be seen on Sundays and one evening during the week at your local Games Workshop – the red and black store with Lord of the Rings posters in the window and nu-metal blasting out the speakers. There’s been a slew of video games licensed from Warhammer 40k, including the excellent PC RTS Dawn of War. Those hoping for a similarly superb handheld game will be sorely disappointed.

Squad Command sees you control six Ultramarines, a chapter of the mega-religious Space Marines, as you battle against the evil forces of the Chaos Space Marines across blood-soaked war-ravaged worlds. Don’t worry, we’re not being light on the story detail. There is none. Bar a few words of context told through impressive CG cut-scenes, there is no backstory to the 15 missions. It’s simply them against us, and the winner takes all.

This will probably be more of a problem for Warhammer enthusiasts, who would have loved to have had a detailed back story to enjoy. For the rest of you though it’s all about how the game plays.

Squad Command works like a typical turn-based game. Each marine has a set number of action points used to move, aim and fire weapons. Once you’ve spent all your action points for all your marines your turn ends and the Chaos Marines take their shot. This repeats until you’ve killed everyone or completed set objectives. The further you move the more AP you use, the better you aim, the more AP you use and the more powerful the weapon the more AP is needed to fire it. So, for example, if you want to use your basic bolter rifle on an enemy that’s not far away, you only need to spend four AP. However, if you want to use a rocket launcher on a few enemies who are mid-distance away, you need to spend at least 12 AP.

And so on to the dreaded camera. Battles, which tend to last between 20 and 30 minutes, would be perfectly enjoyable if it wasn’t for the limited camera. You have a static top-down, isometric view from which you view the battlefield. This is the problem. Despite being able to move it very slightly with the PSP’s analogue nub, your field of view prevents you from seeing everything you want. You’ll constantly find that you can’t see your enemy properly because they’re positioned behind a pillar or a barrel or whatever.

Although the game turns scenery transparent when it obscures your view in this way, and has small red squares at the edge of the screen to show you the general direction of visible enemies, it’s not enough to prevent the annoying situation of being attacked from an enemy Chaos Marine you would have spotted if you had the ability to spin the camera 360 degrees.

The camera issues are doubly disappointing because the game has some outstanding features. The battlefield environments are fully destructible. Barrels, walls, crates, the lot. Everything can be blown up. And it feels pretty satisfying to do so, especially when you launch a rocket into the face of a Chaos Marine who thinks he’s well covered and you see tonnes of damage numbers appear on screen.

The graphics too are impressive for a PSP game. The marines are well detailed and, as we’ve mentioned, the CG cutscenes look great. We would have liked to have seen more Space Marine chapters to choose from however. It gets a bit boring having to look at the same blue Ultramarines fight the same black Chaos Marines every battle. The game could have done with a couple of alternative races, too. Perhaps the Orcs or the Eldar. And despite being able to choose from 20 weapons before you begin a battle – and they do genuinely have unique uses, like the sniper rifle for accurate, long distance shots, or the shotgun for a close range, powerful spread – they’re not cool enough to keep you interested for long. The close quarters chainsaw attack is particularly unsatisfying, and the game doesn’t have a hint of gore anywhere.

The game is much better played multiplayer. You can play wirelessly, up to eight players, and there’s game sharing making it possible to experience multiplayer with only one copy of the game. Here there is more variety – you can choose between small, medium and large maps, between ice, industrial and desert environments and between three different chapters of the Space Marines and the Chaos Space Marines (there’s no difference between the forces whatsoever apart form looks).

Playing multiplayer is actually decent fun, much more so than against the computer in the campaign. We’re quite looking forward to connecting to the Internet and playing against anyone in the world in ranked matches, which we haven’t managed to try pre-release. Because the game’s campaign is short and, to be honest, not fantastic, Squad Command’s multiplayer offering will be what keeps you playing.

So, if it wasn’t for the frustrating camera, Squad Command would have been a recommended PSP purchase for all. As it is, it’s only recommended for die-hard Warhammer fans and turn-based enthusiasts.

If it wasn't for the frustrating camera, Squad Command would have been a recommended PSP purchase for all. As it is, it's only recommended for die-hard Warhammer fans and turn-based enthusiasts.
6 Good graphics Fun multiplayer Terrible camera Lacks variety