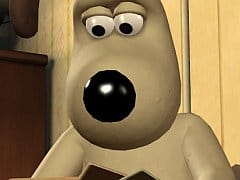 Wallace & Gromit’s Grand Adventures Season One kicks off on PC today with the release of Fright of the Bumblebees. From Telltale Games, the episodic point and click specialist behind the release of Sam & Max and Strong Bad’s Cool Game for Attractive People, Fright of the Bumblebees is a short, roughly four-hour episode that sees the Lancashire inventor and his super smart dog battle to save Wigan from a giant bee invasion.

The giant bee invasion is, of course, the result of one of Wallace’s doomed from the start business ideas. As anyone who’s seen one of the Aardman claymation TV films will know, Wallace’s many contraptions invariably get him into trouble, and it’s up to his dog Wallace to bail him out.

Telltael’s point and click treatment fits the Wallace & Gromit universe to a tea. With the WASD keys reserved for movement about the beautifully realised environments, which include Wallace’s house at 62 West Wallaby Street and a collection of shops down the road, the mouse is used for interaction.

In classic point and click style, the gameplay revolves around interacting with the environment and using the various items picked up along the way to solve puzzles that forward the story. At regular intervals throughout the story control is switched from Wallace to Gromit, so really there are two playable characters, although they have no unique abilities. The game begins at breakfast. Wallace is hungry, and it’s up to Gromit to make sure it doesn’t take too long before his eggs, toast and honey are sat in front of him ready to be devoured.

Sparked by final demand bills that have popped through the letterbox, Wallace sets out to make some money. His latest invention is the “Magnatronic Pullinator”, a giant machine, kept in the basement, that converts flowers into honey, with a little help from some bees. Wallace hopes to sell the honey to the good people of Wigan and make a packet along the way. It doesn’t quite go according to plan.

Soon enough, a massive order comes in from the local grocer, with a deadline of that evening. Wallace accepts, knowing full well he doesn’t have enough flowers to fulfil his promise. This is the point where Fright of the Bumblebees really gets going. Point and click adventures live and die by their puzzles. They’re what’s remembered years after the event. It’s here that Fright of the Bumblebees disappoints. The puzzles aren’t difficult in the slightest and all but the youngest players shouldn’t need to use the hint system at all, really. Perhaps the best one sees Wallace controlling his cheese-seeking robot mouse with a remote control as it’s interrogated by the local policeman. It’s been locked up for terrorising the local grocer the day before, and the copper wants to see it show some sign of remorse before granting it its freedom. This, of course, is impossible – the mouse is a robot – but with the remote control and some cleverly placed bits of cheese you’re able to make it move about the jail cell and act like it’s responding to the policeman’s questions. Ultimately, though, the puzzles won’t live long in the memory.

Fright of the Bumblebees’ strength is instead in its tone and atmosphere. Telltale has done a wonderful job of capturing the uniquely British humour that’s underpinned Wallace & Gromit’s massive popularity on these shores and, to a lesser extent, North America. There aren’t any laugh out loud moments, no sarcastic one liners fans of Sam & Max might expect from the game or fast-paced action elements (even when the game does dabble in action, which happens only twice, there’s no time limit or threat hindering the puzzle solving).

Instead we get Gromit solemnly shaking his head at every bad decision his master makes, his eyes wide in resignation. We get the brilliantly realised town folk humouring Wallace as he shows them a snail believed to prophesies a catastrophe from the skies. We get the local news stand, a woman who asks Wallace to pick out verbs and other words to form a sentence she can use to insult her grinch of a husband with. We get a stiff upper lip ex-World War II soldier, a man who’s as loopy as he is funny. Wallace & Gromit’s world is subtle, never crude and always charming.

If Telltale should be praised for recreating that Wallace & Gromit short film feel with the dialogue, it should be commended for the job it’s done with the graphics. When exploring Wallace’s basement, or pottering about in his front garden and chatting to his neighbour Felicity – a woman who’d give Hyacinth Bucket a run for her money in the keeping up appearances stakes – everything looks wonderful. The claymation feel of the films has been captured not only in the character design (you can see small depressions in their skin and clothes, as if they really were clay) but in the camera angles, too. There are moments where the graphics do look basic, and at points ugly, but on the whole you’d have to be a grump of epic proportions not to find virtual Wallace and the humble streets of Wigan charming.

There are problems. The audio seems to suffer at points from technical issues – Felicity’s dialogue in particular almost sounds broken. The heavy brass score is too loud in the mix, and sometimes it’s nigh on impossible to make out essential dialogue as a result. And, occasionally, the game can frustrate when you’re trying to click on something that you know can be interacted with, but because you’re millimetres from the right spot the game won’t let you do so.

These issues, however, don’t prevent Fright of the Bumblebees from being a point and click adventure that fans of Wallace & Gromit, indeed fans of the genre, will enjoy. It’s a brief, slow paced, quintessentially British experience that won’t be everyone’s cup of tea, but it’s compelling nonetheless, and Telltale has absolutely nailed the atmosphere and feeling of the TV shows on which it’s based.

Assuming the roles of both Wallace and Gromit, players will spend each…

Assuming the roles of both Wallace and Gromit, players will spend each…