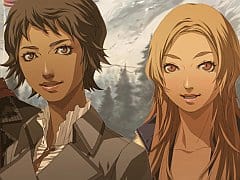 So says Elena Salazar, the 20-year-old nurse who also happens to be a former patient of Dr. Vaughn, the super-powered surgeon at the remote Montgomery Memorial Hospital in Alaska, a country described by Trauma Center New Blood, the latest in the Atlus-developed video game operation sim series, as “the frigid northern extremity of America”. Days of our Lives, eat your heart out.

New Blood is absolutely hilarious, fiendishly difficult and, somehow, hideously addictive. The characters, the dialogue, the sexual innuendo, the wonderful cliff hangers, “…except the patient… is me…”, the entire game is impossible to take seriously, which is an incredible contradiction, since the actual gameplay on offer deals with some of the most sombre themes of any game series around. You’re a surgeon, saving people’s lives, cutting out tumours, repairing broken bones, pulling bullets out of hearts, replacing little girls’ pacemakers, it’s all incredibly grim, and yet funny. Trauma Center truly is one of the weirdest games on the planet, and quintessentially Japanese.

As in the first Trauma Center title on the Wii, Second Opinion, New Blood challenges you to use the Wii Remote and Nunchuck as if your hands to guide various surgical tools, selected using a radial system and the Nunchuck thumb stick, during insanely difficult operations and save patients’ lives before their vital signs flatline.

In between operations a fully fleshed out, and quite silly story plays out, told through full voice over and still cartoon images of the characters. Set seven years after the events of DS game Trauma Center: Under the Knife 2, which hasn’t been released in Europe, New Blood follows the story of doctors Markus Vaughn and Valerie Blaylock, two world-class surgeons (you’re able to pick which one you want to play as during each operation) who share the same astonishing surgical technique known as the “Healing Touch”. For Markus, this triggers Slow Time, allowing him to cope with multiple problems easier. Val gets Anesthesia, which temporarily stabilises the patient’s vitals. Healing Touch is kind of like a mystical super power brought about through spiritual meditation, although Val learns it through a different process: “It wasn’t the technique that was important for the Healing Touch; it was the opening of my heart.” But to trigger it you need to perform the same action for both: draw a five-point star. The two docs begin the game in a remote hospital in Alaska, but eventually return to Concordia Medical Institute in sunny Los Angeles and combat a mysterious disease called Stigma. Quite brilliantly, the plot, which is full of dramatic twists and turns, evolves into part sci-fi thriller part daytime soap. Imagine The Andromeda Strain spliced with Dallas.

Gameplay wise, the headline new feature is the implementation of a fun cooperative mode. Here, a second player can use a second Wii Remote/Nunchuck pair and assist in the operation, which, you quickly discover, is absolutely essential for success, especially on the medium difficulty and above. That’s because New Blood, like its predecessor, its brutally difficult, right from the off.

It’s hard for two reasons. One, it’s impossible not to stop the little dot that appears on screen from shaking, even when you hold the Wii Remote still. This is as much a symptom of the motion sensing technology as it is anything else. The console simply isn’t designed to facilitate the kind of precision Trauma Center demands. The clock ticks, vitals fall, and you frantically draw a simple incision with the scalpel along a straight vertical line. Good luck, the incision will be all over the shop.

I’m not a particularly nervous person. I don’t suffer from paranoia, the shakes or any other Ozzy Osborne-related condition, so I consider myself a fairly decent representation of the average Joe who’s going to play New Blood. And still, accurately pulling out a bullet from a patient’s heart with a scalpel resulted in death after death after death. So frustrating was the experience that I nearly bit the Wii Remote in half. Expect to see the soul destroying game over screen, which details how your failure haunts the two protagonists, Markus Vaughn and Valerie Blaylock, so much that they quit medicine, very, very, often.

In a way, the shaky dot syndrome is probably a realistic representation of real life surgery, but in Trauma Center it makes for some incredibly frustrating gameplay. The game is incredibly challenging irrespective of the steady hand issues, and there’s a painful difficulty curve that starts off high then shoots off like a rocket into the stratosphere. About an hour or so in, during the second chapter, there’s an operation that, even on the easy difficulty, is nigh on impossible to complete without a co-op buddy. You’re charged with replacing a faulty pacemaker with a working one in a small girl’s chest. Not only do you have to cut the wires of the pacemaker with minute slits, but she constantly goes into cardiac arrest, requiring you to massage her heart by pressing A and B together when two outlined hands overlap. We imagine this brick wall of a level will send many newcomers to their nearest shop for a quick trade in.

It’s a shame, because New Blood retains a truly bizarre hold over you throughout its lengthy campaign, partly because of the uniqueness of the gameplay (there isn’t anything like this available anywhere else, on any platform), but also because the story, which wraps its claws around you and sucks you in deeper with each dramatic plot twist. You actually want to find out what’s going to happen in the next chapter, so much so that the rock hard gameplay end ups getting in the way.

Perhaps the biggest disappointment, however, is the lack of replayability. There’s online leaderboards, where you can compare your operation results with the rest of the world, but apart from working your way through the story, there’s little else here to keep you entertained once you’re done with it. Online cooperative play would have been a genuine step forward, as well as some kind of competitive mode, just for laughs. As it is, New Blood is the same as Second Opinion with the addition of a new story and co-op.

That doesn’t prevent it from being a solid, fun and totally unique experience, though. It’s incredibly difficult and frustrating in places, but it’s still a recommended purchase if the idea of carving up skin, lasering tumours and drawing five-point stars floats your boat. Atlus just about gets away with its progression of the series this time. Next time, like the game itself, we won’t be as forgiving.

New Blood is incredibly difficult and frustrating in places, but it's still a recommended purchase if the idea of carving up skin, lasering tumours and drawing five-point stars floats your boat.
8 So bad it's good story Coop operations are fun Incredibly hard Motion sensing controls wobbly

Two Player Cooperative Play! For the first time in the series, work…

Two Player Cooperative Play! For the first time in the series, work…