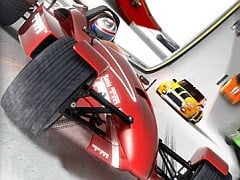 Trackmania has gained quite a following on the PC over the last few years. Releasing the brilliant Trackmania Nations for free helped a lot, but the fun arcade racing with an emphasis on time trials had a lot to do with it. There’s also a big community of track designers, so you’re never short of new content. In theory, the game seemed like a great fit for the DS. The handheld can go online, it’s touch screen is ideal for creating and the gameplay isn’t too complex for the little machine to handle. The problem is that these features haven’t been capitalised on like they should have.

The DS game includes three game types, racing, platform and puzzle, which have made their way over from the PC original. Racing is, as it sounds, you in a car, screaming around a track in as fast a time as possible, with the other racers simply representing the gold, silver and bronze times that you’re trying to beat. Platform is about trying to get to a location with as few retries as possible (you can fall off the track) and puzzle lets you place building blocks to create a path through to the end. It’s certainly not lacking ideas and is quite unique in the racing genre.

On the DS the zones are limited to Stadium, Desert and Rally (so you don’t get all the zones found in the PC games), with each offering a slightly different handling model. The stadium tracks force you to use a car that resembles an F1 car, so you move quickly and need to concentrate on corners. Desert tracks throw you in a stock car, which feels a bit like a banger from a destruction derby, while rally tracks obviously see you in the driver’s seat of a powersliding rally car.

While the DS’ d-pad controls make things a little twitchy, you do get used to the control quirks quickly. The biggest issues come from the visuals and the complete lack of online functionality, which in effect strip the game of most of its strongest features. For a DS game the 3D engine here is impressive, and the sense of speed is good, but it’s often incredibly hard to see where the track is going next. You’ll drive up a ramp and then fly completely off the track because you couldn’t see that you had to take a sharp left. It’s a real shame and something a track overview on the bottom screen could have easily solved.

A bigger concern is the lack of online, both in terms of competitive play with other owners of the game and online leaderboards. Head to head play is limited to local wireless, which works well but isn’t likely to be something you’ll do all that often, if at all. The lack of online leaderboards is a big oversight though, with the PC game’s key hook being completely absent. Without that drive to have just one more go in order to beat a mate’s score, the game feels oddly lonely and archaic, with just your own times to compete with. The same goes for track sharing. There are likely to be some great tracks created, but unless you know the creator and can visit him, you’re never going to play them.

All this makes Trackmania DS something of a disappointment, especially considering these missing features have been included in other DS titles. The core racing, platforming and puzzling is good, albeit hindered slightly by the visuals, but without the competitive edge that the PC game offered there’s little here to make you come back. You’ll likely play through the various challenges, complete them to a high enough standard to unlock all the content, and then put the game on your shelf, never to be returned to. Had online support been included it’s likely the game would never have strayed too far from your handheld.

The core racing, platforming and puzzling is good, albeit hindered slightly by the visuals, but without the competitive edge that the PC game offered there's little here to make you come back.
6 Plays well Technically good No online multiplayer No online leaderboards

With TrackMania DS, you drive at mind-blowing speeds on incredible tracks made…

With TrackMania DS, you drive at mind-blowing speeds on incredible tracks made…