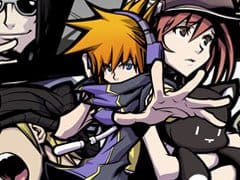 The World Ends With You Review

What to say about The World Ends With You? A bizarre title for a bizarre game. Quintessentially Japanese, this RPG will leave some Square Enix fans running for the hills and others captivated by its cool, modern aesthetic.

TWEWY (possibly the greatest videogame acronym ever, ahead of LOTR:BFME2 ROTWK and PJKKOGM), is initially bewildering. The combat system seems impossible for a human being to cope with and the complex ‘Pin’ system and ‘Psyche’ ability make the game harder to grasp than a quantum mechanics lecture. This is the bit where we’re supposed to tell you it gets easier the more you play it, but it doesn’t really. It’s always mind-bogglingly bamboozling from start to finish.

You play Neku, a Japanese teenager with a chip on his shoulder. He finds himself in modern-day Shibuya, one of Tokyo’s trendiest, busiest districts, with no idea how or why he got there. He soon learns that he’s been sucked into a parallel dimension life or death game that feels like The Matrix blended with Battle Royale. The game is run by the Reapers, a mysterious group who use monsters called Noise to try to ‘erase’ the players of the game. Neku and a group of other teenage players have to complete daily missions, sent to their mobile phones, to prevent themselves from being erased and winning the game. Not your run of the mill save the world stuff eh?

It’s classic Square Enix – a narky young hero goes on a voyage of discovery and ends up shifting his teenage angst. This, once again, will please or annoy. The tone is, accordingly, quite juvenile. Japanese teenagers are obviously extremely polite. Quite what Neku and co would think of the top of the 159 bus once school kicks out I dread to think.

Gameplay wise, the game throws so much information at you in such a short space of time that it’s hard to know what’s going on. Firstly we’re introduced to the Psyche ability, which allows players to scan an area and see what Shibuya’s residents are thinking, as well as spot roaming Noise. The Noise are floating about and can be touched with the stylus to initiate a battle. But the Psyche ability doesn’t stop there. Later on you’ll be able to imprint thoughts into other people’s minds in order to solve puzzles and progress the story.

Fighting, and indeed much of TWEWY, revolves around pins, which grant Neku special abilities once equipped. They might be different attacks, for example a multiple slice, or a protective shield, triggered by drawing a circle with the stylus. When Noise are defeated they drop pins. One of the game’s great motivations is levelling up the pins you’ve already got, discovering new ones and, in true Pokemon style, collecting ’em all.

But it’s the battles themselves which prove most baffling. They’re spread across both screens. Neku takes the bottom and his fashion-obsessed female friend, Shiki, at least in the early part of the game, takes the top. While you’re responsible for Neku’s attacks and movement with the stylus, you’re also responsible for Shiki’s attacks, triggered either with the d-pad or the face buttons. So you have to, in essence, control two characters at once on separate screens.

Obviously this is extremely hard. You’ll be trying to avoid Noise by dragging Neku about with the stylus, and attacking when you have space to breathe, when Shiki will be low on health (hit points are spread across both characters) because you haven’t been able to concentrate on her. While you can leave the computer in charge of her attacks, at various degrees of control, it’s a constant struggle to keep her alive, especially when faced with multiple Noise. We found ourselves saving after every battle because dying is such a regular occurrence. Later in the game, when you get access to the more powerful pins, it becomes a lot easier, but, ultimately, TWEWY’s combat system will be extremely hard to master for most gamers.

Once things settle down you’ll find that most of your time in the game is spent clearing out the Noise in a certain area in order to unlock access to the next. The missions usually culminate in a boss battle, too. Once defeated, Neku will mysteriously wake up at the beginning of the next day, fresh and ready to take on the next mission.

There’s other, more RPG-style stuff to do. This being Shibuya, and with the game so focused on fashion, you can visit various stores and buy numerous items of clothing. These act as TWEWY’s equipment. Different items of clothing will grant different stat bonuses, as you’d expect. But the nice twist is that you’ll get even better bonuses for wearing certain types of clothing labels in certain districts. Wear something that’s hot in one area and you’ll get a tidy bonus that could swing a boss fight in your favour. Wear something that’s not, and you’ll get a negative status affect. Never forget, Tokyo doesn’t hold any punches when it comes to fashion victims.

TWEWY is odd, for sure, but there’s something refreshing about it. It’s certainly dripping with style, and its anime cool is sure to draw in Japanimation fans. Brilliantly, there are a few innovative gems that RPG developers would do well to take notice of. The game will calculate how long the DS is turned off in between sessions and, when you turn it on again, will level up your pins accordingly. There’s also a wonderful difficulty scaling system, where you can lower your HP if things get too easy or increase it if things are too hard. This affects the pin drop rate from the Noise. Play the game with the lowest amount of HP and you’ll have the best chance of winning the rarest pins from the Noise.

The game isn’t without its issues. The various pins and their associated attacks can be quite similar, and the game has a hard time registering different stylus strokes as a result. Accurate and quick movement can be a struggle too. Its Jet Set Radio-esque soundtrack, mainly Japanese pop, will either annoy or delight. Unfortunately for us it was the former. And Neku himself can be extremely annoying. For the majority of the game his emo angst moaning makes you want to slap him in the face.

But these gripes don’t prevent TWEWY from being a refreshing, cool RPG that’s simply bursting with new ideas and interesting gameplay mechanics. It’s easy to lose yourself in the game, spending hours obsessing over clothes shopping, building up ridiculously high combos during battles and hunting down unique pins. It will please fans of all things Japanese the most and probably alienate others, but there’s something about TWEWY that makes it just a little bit special.

The World Ends With You

The story begins as our hero, Neku, wakes up amidst the hustle…

The World Ends With You

The story begins as our hero, Neku, wakes up amidst the hustle…