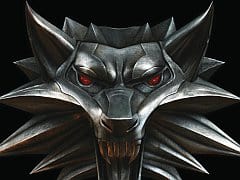 Without doubt, The Witcher was one of the most controversial PC titles of 2007, being well-received by players and fans, but (in the UK at least) only being lukewarmly received by most critics. Here at VideoGamer.com we found a lot about the game to praise and awarded it a creditable 8/10 first time around. The game’s developers, CD Projekt RED, took note of the major grounds for the criticism of the game in the UK (notably the long loading times and the heavily cut-down English script) and didn’t quite go back to the drawing board, but took their game and lavished it with even more time, attention and dedication. The Witcher: Enhanced Edition was born. Nearly one year later, Geralt of Rivia is back, and back with something of a vengeance.

The game is noticeably improved in just about every aspect: loading times are much less glacial (though perhaps still a little bit on the uncomfortably long side), the re-recorded voiceover work brings out the characterisation far better than before and the restored English script, while not entirely perfect, is much more colourful, coherent and descriptive. Other improvements include a revamped inventory system, which makes potion creation much more intuitive, since you can filter alchemical substances by category, allowing you to more easily gauge which types of ingredients you need to gather or purchase to create that Cat potion you might need for a foray into a dark, dank crypt, or a Blizzard potion you need for a particularly tough boss battle. Also included are two excellent standalone adventures, which not only extend the already considerable playtime of the main campaign, but also give you more of an insight into the game world. Another addition is the D’jinni adventure creator kit, which you can use to make entirely new adventures, should you be bitten by the creativity bug.

So, how much difference do all these changes make, you might ask? It would be over-egging somewhat to say that the game has been completely overhauled, because in truth, it didn’t really need one in the first place – just a bit of tweaking and an extra layer of polish. Obviously the most noticeable difference is due to the script. With five thousand lines of restored dialogue and a re-recorded voiceover (which is better directed than the original version), the game world now feels richer and more vibrant and believable than before. One of the things we liked best in the original game was the way the world was presented in shades of grey, with there being no obvious right or wrong moral choices. This aspect is even more apparent and better detailed with the revised script. Some characters that were merely dislikeable first time around are now utterly repellent, as are the decisions they ask you to make.

By expanding the characterization and giving you more information with which to make decisions, this version of The Witcher taps deeper into the core concept from Sapowski’s Witcher stories – is there such a thing as a ‘lesser’ evil, and how do you decide which is the lesser of two evils when forced to choose one? And unlike a lot of RPGs that claim to give the player choice before inevitably railroading them down a set path, the choices you have Geralt make in the game do have a tangible effect on the game world, though the consequences of your choices may not manifest themselves until later in the game. Having a decision you made 20 or 30 hours earlier in the game come back and bite you is rare, even for an RPG, so it’s nice to actually play a game where you do have genuine (rather than illusionary) choice, as it provides a strong incentive to replay the game and explore what would have happened if you’d made a different decision.

The other changes made for the Enhanced Edition (the inventory improvements, reduced loading times) have a more subtle impact on the game experience, but a beneficial one. You will particularly notice the technical improvements to the game when playing the chapters in Vizima, where there are a lot of map loads as you move in an out of buildings: you will spend much less time looking at loading screens, making the game flow so much better. Conversational cut scenes are also now more naturalistic, thanks to the addition of more character animations – not something that radically improves the game, but something that demonstrates the incremental improvement of quality throughout.

If you previously held off from buying The Witcher on the grounds of the English localisation being sub-par, then now be assured that the Enhanced Edition not only restores the game to what it should have been like in the first place, but also makes it even better. There’s a very delicious irony that one of the best RPGs from 2007 should also be one of the best RPGs of 2008 as well, or maybe that’s just a sad indictment of this year’s PC release schedule… regardless, thanks to the extra time and attention given to it by CD Projekt, The Witcher Enhanced Edition is a truly excellent RPG. If you’re looking for something a little bit different from traditional AD&D fantasy RPG fare, The Witcher offers a beautifully realized, complex game world, where the dialogue and politics are of equal importance to the action.

Some may find the pervading tone a little on the distasteful side: this isn’t a game world of fluffy kittens, demons and clear-cut morality – The Witcher is more about anti-heroes, moral conundrums and trying to walk the least evil path, rather than trying to save the world. Thanks to its Eastern European roots, The Witcher is a very different RPG to those you may be familiar with, so if you consider yourself to be a connoisseur of the genre, the release of the Enhanced Edition – with its multitude of fixes and improvements over the original – now means that the game is essential playing.

Thanks to the extra time and attention given to it by CD Projekt, The Witcher Enhanced Edition is a truly excellent RPG.
9 Player choices affect the story in a meaningful way Improved over the original in almost every way Lots of extra content Free for owners of the original game