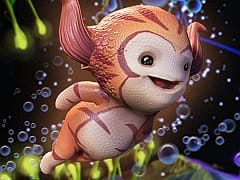 It’s a strange time in the independent games market when in the last five years the approach to visual design seems to almost be standardised. These days the unconventional, often highly abstract design route that’s steadily been adopted within the Art Game circuit is a visual signifier of the genre, which explains why there has been such a knee-jerk reaction comparing The Undergarden to flOw or Flower. It’s highly visual, so somewhere between its ambience and trippy 1970’s colour-scheme it appears to be a kind of phantom sibling of these bigger indie titles.

At least 3/4 of the setting is built around underwater flora, with the objective of each level being to pollinate them. Which means that 3/4 of the game is a pure and basic visual jaunt. Plants explode around you in various colours, essentially making this a game about painting a canvas with newly bloomed neon flowers. Technically that’s your only objective in the game: to take on the role of a little podgy alien thing, collect pollen from sacs around the level and to pollinate. And that puts The Undergarden in the same gene pool as the games it finds itself compared to; it’s about creation on a basic level, as opposed to destruction.

And by extension the game mechanics are minimalist enough that some aspects of the Undergarden are left unexplained. Hovering somewhere in between “needlessly vague” and “fairly intuitive” the game leaves you to figure out your environment (and to a certain extent the UI) for yourself. An icon hovering near the bottom of the screen will seem relatively meaningless until you realise it gauges how much pollen you have on-hand. Similarly, neon blobs that populate the levels mid-way through actually deplete your pollen, a fact that you’ll only be quick to notice if you realise what the icon does in the first place.

But with no real consequences for your actions you essentially have a free-form game on your hands. In The Undergarden there’s no health or death or even any victory conditions that extend beyond getting a 10 per cent completion rate on puzzles. Is this a puzzle game that’s been diluted or is it a sleepily meditative casual game? It’s almost impossible to tell, but intentional or not the game is still relatively zen: calming, unchallenging but not particularly self-reflective.

The puzzle aspects are made up of blocks that section off certain pathways and have to be pushed up or down to continue through that area of the level. Well, not pushed so much as weighed down or made to float up, or in some cases explode. Your alien character will pollinate certain trees that will give you various kinds of fruit that have certain abilities. You’ll have your Lantern fruits that light your way through dark passages. You’ll have Energy fruits that can be used to power up organic technology. Exploding fruits detonate, Floating fruits float, and generally speaking the fruit you want to use on the upcoming block-puzzle will always grow immediately next to it or on a platform nearby.

And then you’ll have other, slightly more complicated barriers that cut you off from the completionist goals of the game. Cogs will have to be pushed in certain directions to give you access to locations with hidden crystals and special flowers, and gusts of wind from underwater vents provide barriers that prevent you from easily getting to certain areas as well. Alternatively they might keep you from pollinating every plant in the game, another one of the few side-goals in Undergarden.

But you can bypass that level of challenge simply by not doing it. Collectables, as always, are completely optional and while the 100 per cent completion rate gets you new skins or horns for your alien guy, it can be played as a casual, relatively challenge-free lark through bushels if that’s what you’re hoping for.

You’re not dealing with the same sort of design-school conceptual innovation that you see in the types of games that this finds itself compared to. It’s an ambient experience stuffed with a very simple puzzle game, not a complex chicken cordon bleu as much as a comforting pig-in-a-blanket. Possibly the best looking pig-in-a-blanket you’ll come across.

Intentional or not the game is still relatively zen: calming, unchallenging but not particularly self-reflective.
7 Visually impressive Not innovative Repetitive gameplay Quite easy