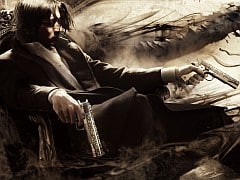 Ah, Digital Extremes. Subtlety and nuance has never been its strong suit, though by inheriting this intriguing FPS series from poignancy-laced developer Starbreeze it’s decided to have a go at the emotional stuff anyway. So you’ve got those iconic narrative-led cutscenes, dragged over from the original but not quite as special this time around, and a plot about how Jackie desperately pines for his deceased girlfriend Jenny Romano. The Darkness II attempts to make you care with telegraphed actions rather than character, so you know you’re supposed to be overcome with emotion because the game makes you, for instance, press a button to light a candle for Jenny. A candle! I imagine the dripping beads of wax are supposed to symbolise players’ tears.

Faffing about with candles isn’t why you’re here, though, and much of the Darkness II is preoccupied with using your assorted powers to shoot, stab, gut, gore and eviscerate the hundreds of goons between you and the end of the game. Jackie’s headlining ability is spawning two demon arms from his back, with the left being used to grab enemies and throw objects, and the right to slice them like a magical tentacle sword.

Both arms – which I’ve affectionately dubbed Grabby and Slicey – are controlled independently by the player. You can pick up a car door to use as a shield in your left arm while shearing enemies in half with your right, for instance, all while peppering a few bullets into some faraway targets and then finishing the skirmish with a flourish by using your impromptu shield to decapitate the last unlucky mook. Classy.

Weaken a foe with, say, a bit of gunfire, and you’ll be able to see their heart (you can also eat hearts to regain health, just like real life) and grab them for a hyperbolic execution move, which can also be used to replenish Jackie’s health and ammo supplies. These are gruesome affairs, with Grabby and Slicey toying with their terrified foes before slicing through torsos/heads/squidgy bits and showering the screen in blood.

I find it a fascinating game, empowering in its controls and with some marvellous core combat but severely limited in scope, and it manages to be an odd title that’s often thrilling yet painfully dull a few seconds later. Digital Extremes has done an admirable job creating a colourful world and a great control scheme, and after the first few levels you feel like you’re spent. And, sadly, it feels like Digital Extremes is, too – throwing up the exact same combinations of enemies, in all too familiar environments, and doing little other than swapping out the early mobsters with some cult members with their own spooky powers. It’s also marred by some tedious boss battles, almost all of which use the exact same teleporting trick.

The Darkness II’s biggest success is its controls, which elegantly mixes your demonic powers with robust dual-wielding shooting mechanics – it’s empowering in the exact same spots where the original felt limited. Upgrades are doled out via an experience system, where just shooting an enemy gives you a fraction of the points gained from a grisly execution, and this systematically exposes the player to one of the game’s greatest flaws; there simply isn’t enough variety to your execution moves, and it’s impossible to relish the prospect of another after they’ve disrupted the game’s rhythm hundreds of times.

As you progress you’ll be able to start unlocking Jackie’s more advanced powers, such as conjuring up swarms of evil Darkness bees, opening black holes and deploying a jazzy Darkness-themed version of id’s Quad Damage. Maxing out your abilities and blasting through New Game+ is actually more fun than your original run.

The Darkness II ploughs ahead at a faster pace than the original, doing away with its creeping sense of sticking to the shadows and replacing it with a balls-out desire to have you plough through environments with gory flair. Much of the time your progress will be hindered by a door blocked with a bright light – which disables Jackie’s powers and health regeneration – and having you ferret around for the off switch to progress to the next room.

You’ve got to hand it to the art team, too, who have successfully managed to fill a game called The Darkness with an impressive abundance of colour, where even the night sky is marbled with streaks of saturated, inky purples. The game boasts competent use of the colour wheel, using deep pools of reds, blues and yellows alongside a delightful use of cel-shading and crosshatching that brings back enticing memories of Borderlands. This is styled to look like The Darkness’ comic book ancestry, and it’s a competent and elegant aesthetic, immediately grabbing the eye and helping the game stand out in the most oversubscribed of genres.

A touch of the cartoonish also allows Digital Extremes to gleefully squidge in an abundance of comic ultraviolence. Some fantastic incidental touches help lift the experience, such as the awkward squeak of an exploded corpse as it slides down a splintered window pane during an escape sequence. These are few and far between, but these spots of dark humour are exactly what the game needs more of.

Elsewhere, The Darkness II’s bread-and-butter assortment of winding corridors and open-plan dismemberment playgrounds are joined by intermittent hub locations as if it was a contractual box Digital Extremes needed to tick before 2K Games would pay their wages. These take place in Jackie’s massive but boring mansion (where you can interact with the taps and very little else) and, later, a mental institution that tries to suggest the whole game might be a figment of Jackie’s imagination. In both locations you interact with all your wiseguy colleagues for additional nuggets of information, but these cardboard cut-out Mafioso stereotypes are so thin it’s a massive surprise they’re not just 2D models spewing quotes from Goodfellas.

While its attempts at being human fall flat, The Darkness 2 excels in its supernatural cast. Mike Patton reprises his role as the gravel-gargling voice of The Darkness, but the game’s casting highlight comes from the Darkling, a cockney little imp who wears a Union Flag shirt and a skinned cat for a hat. He follows you on your mission with his own skittish agenda, generally spouting bollocks and occasionally stopping to jump on people or urinate on corpses, and even gets a couple of brief playable sequences himself during the middle of the campaign. I love the little guy, and his charm is enhanced by the fact the rest of the cast are so uniformly dull.

The brief six-hour campaign (complete with a frustrating and abrupt ending where Digital Extremes publicly begs 2K Games to let them make Darkness III) is also complemented by the four-player Vendettas mode, which squeezes a couple of extra hours out of the game with its own concurrent campaign and odd bonus missions. You play as one of four racial stereotypes – including witch doctor J.P. Dumond and Scottish boozer Jimmy Wilson, each with their own slice of Jackie’s full-blown arsenal – and blast through legions of enemies. Levels aren’t big or clever, though there’s a carnal satisfaction derived from chugging through them. It is worth noting, however, that the Vendettas campaign ends with a weary boss battle that makes those of Deus Ex: Human Revolution look like design masterpieces.

There’s no online pass to worry about with Vendettas, although the game’s main menu has the tell-tale ‘Downloadable Content’ entry currently sitting vacant, and it’s essentially an attempt to make a budget version of one of Left 4 Dead’s campaigns. It’s a nice little bonus, but it’s also easy to see it as a necessary bolt-on to accompany a tiny single-player campaign.

In taking the core of Starbreeze’s original and making it their own, Digital Extremes has established itself as a decent steward for a shooter franchise that deserves to continue. It’s a promising start, but the game’s commendable mechanics are matched by numerous wonky moments, an awkward cast of characters and some wearying repetition. The Darkness II has plenty of heart, but it needs more soul.

The Darkness II's commendable mechanics are matched by numerous wonky moments, an awkward cast of characters and some wearying repetition. It's got plenty of heart, but it needs more soul.
7 The Darkling Darkness powers are good fun Characters are flat Levels lack creativity